The Daughter of Godcast is about movie making, one movie mostly - Daughter of God, just another post apocalyptic, romantic comedy. The first season of the podcast, the Gentle Release was a rambling account of how this movie came to be, and how the making of made me. In this our second season, Crowd Creation, your opinions and critique reveal what scenes are fantastic and which might not quite be. With your feedback, Daughter of God is becoming a way better movie. We're also setting a precedent as the first movie test screened over the entire internet. Please share, share, share! 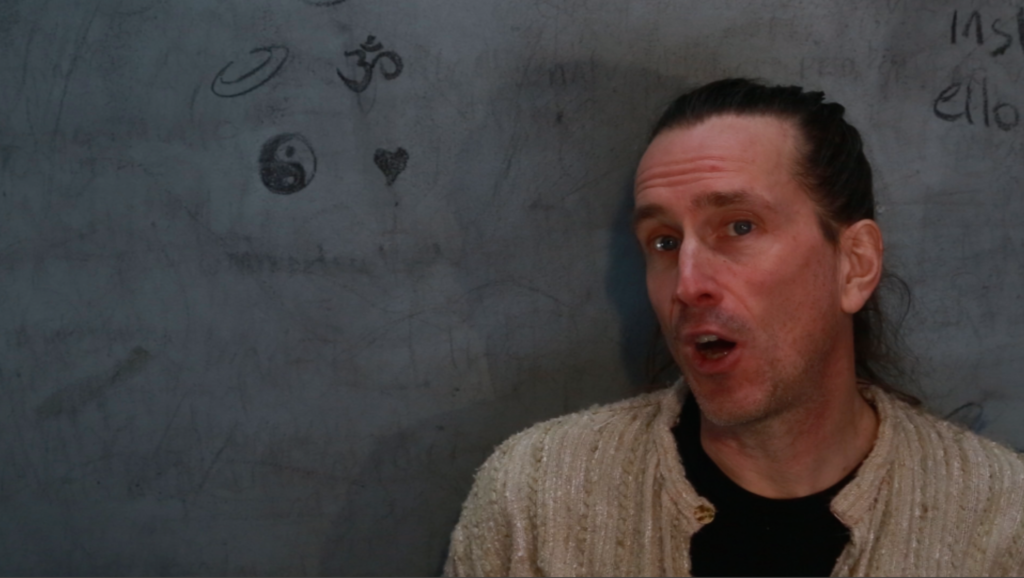 In episode 073, we looked at Open Season. A doe grazing in the forest is surprised by the thunk of an arrow into a nearby tree. She looks around, locates the threat and emits laser beams out of her eyes. There's a pitiful scream and the sound of a body collapsing into the bushes.

Crowd Creation is all about feedback, but how do we get feedback? Not only encouraging feedback but feedback that reveals problems or where a scene might be broken. Getting feedback is a learn as we go process, and I want to share these lessons too.

I requested a count of replays. To solicit more critical feedback, I also asked for "anything that stood out" emphasizing that "there are no right or wrong opinions". We want to know what is working AND what isn't. This phrasing seems effective, feedback for Open Season was the most diverse and insightful so far.

This was the first time a scene was uploaded to both Vimeo and Facebook, which increased feedback, perhaps because Facebook peeps tend not to follow external links. The Facebook version had an annoying resolution glitch tho, which makes the scene appear to change focus. Future uploads to Facebook will have to be carefully vetted. Also, is there a Facebook setting to loop expanded video?

As of Saturday January 20, 236 people were reached on Facebook with 145 views. FB also reports that the video was played for total of 53 minutes. The video is 11 seconds long, so 53 minutes is 289 plays, which is twice the number of views Facebook reports. Kinda confusing, FB.

Meanwhile on Vimeo, there were 13 plays, 47 impressions and a 28% play rate. Play rate is plays divided by impressions or how many times the video loaded on a page divided by how often the play button on the video was then clicked. James commented Vimeo play count seemed low. Why would Vimeo be undercounting? There's still plenty to figure out.

Putting the video on Facebook definitely lowered the plays on Vimeo, but likely increased plays overall. I had been relying on organic or spontaneous likes of the Facebook page but last week I started to invite friends to follow http://facebook.com/daughterofgodcast. You can too - hint hint!

There was lots of super helpful feedback. Thanks so much to everyone who offered their two cents.

Watched it thrice. Bucolic, then startling, suspenseful, surprising, and ultimately satisfying. Loved how the deer’s head, ears, movement, twitch, and overall expression perfectly synched with the offstage shenanigans and sounds!

I watched it twice. Everything was spot on, and the scream was perfection.

Omg, that was unexpected and hilarious

Watched it at least 11 times—I lost count. [snip] I felt freaked out by the concept; it was as though a hunter was trying to find dinner, and he shot at a deer that didn’t end up being a deer at all, but rather, an animatronic deer sporting killer laser eyes. Who would design such a machine and why? To further reduce the population of humans? Or as an advanced guard dog-like creature to protect the deer supply kept on someone’s homestead for their own harvesting?

I found the scene to be surprising and original and I really enjoyed the sound design.

Having James' rationale for the origins of the deer was great. I have a story in my head, but his interpretation sent me in totally new direction. Should I add more hints about my laser eyed deer origin story or let everyone imagine their own? What other stories might folks come up with, I wonder?

Melonie and Joe both opined from Facebook that the look of the arrow is not ideal, which reveals that they are both astute observers, the arrow image is just a sketch. Pretty cool that the arrow was more problematic for Mel and Joe than laser beams coming from the deer's eyes. This might be important when revising, a hyper realistic arrow might make the laser beams less convincing.

Based on these remarks the scene is nearly ready. However fascinating feedback from Philippa via Facebook and Seamus at DOG.MOVIE raises concerns.

Philippa Funny. Sounds like you fell in a toilet or maybe a pond towards the viewer rather than what I assume wants to be a lake off to the right because the sound of your voice and impact on water is so close.

Daughter of God [snip] I am gathering that the water sounds you are hearing are not working, that they are detracting from your experience?

Philippa Water sounds work fine if it’s a comedy, if they are supposed to sound fake.

I called Philippa to make sure I understood her experience.

Dan "So you were hearing water or a lake?"

Philippa "I understood it as a lake, (the hunter was falling into a lake) then I watched it a second time being more critical. Where the deer looks and where the sound comes from are contradictory.  There are many funny things that are happening in a small moment, the sound makes it more ridiculous."

So Philippa is experiencing audio coming from different directions and water. She has generously agreed to review variations of Open Season and help me narrow down the variables.

Seamus The arrow sound wasn’t persuasive. It sounded more like someone slapped a piece of paper than an arrow that thudded and vibrated as it embedded itself in the wood.

He's right, the arrow sound effect was also a sketch, but no one had flagged this, until now. Seamus has especially acute hearing, as we'll see.

Which either means the scream is too loud, or there's not enough echo to suggest the sound is bouncing around the forest and getting delayed. Also, my bad, the hunter's scream overlaps with the body falling, which doesn't sense. The impact of the body hitting bushes or the ground should cut off the scream or turn become a grunt. Either the scream has to end before the impact or the impact cuts off the scream. This anomaly could be conveying that the hunter was too close.

Seamus I wasn’t entirely sure why there was the sound of trees falling. Did the laser fell a tree after the man went down? The beam seemed too still for that. Did the man knock some trees over somehow? That doesn’t seem plausible.

That Seamus literally heard trees falling is vexing. Because he's spot on, I used a snippet of trees falling to approximate a body toppling over. Seamus heard the trees and Philippa heard splashing. Clearly, this sound effect needs finessing.

In Episode 072, Date Dance we focused on Christina dancing into and out of various costumes. Behind her are boxes covered with mediatronics, a concept pilfered from Neal Stephanson's Diamond Age.

Mediatronics are a computerized paint that turns any surface into an animated visual display, maybe for labeling or advertising. Flickering monochrome mediatronics are all over the Daughter of God world, as we'll see in future episodes. Check out the episode for links mediatronic references from Season One, the Gentle Release (042, 044, 057) and Signals from a Nearby Now.

In Twelve Mediatronic Ads, instead of a single scene we're looking at elements common to several scenes, mediatronic advertisements. There is no audio.

There are Twelve Mediatronic Advertisements, each preceded by a number for easy identification. These are ads from an alternate future, so they are going to seem somewhat nonsensical. You don't have to understand them, just choose which ad is your favorite, which ad you find the most disturbing and post those numbers in the comments. Feel free to elaborate on your choices.

The feedback process has been really helpful and if you've commented, thank you so much for your time and attention. If you haven't shared your opinion yet, don't be shy. We love learning about everyone's experience. Together, we're making a better movie, better and better!

You've been communing with a distant cousin of this timeline via Twelve Mediatronic Ads, Episode 074 of the Daughter of Godcast Crowd Creation.  Thanks be to you movie lovers, story tellers, collaborators, trouble makers, house holders, forest dwellers, lovers, dreamers, beyond category and in-betweeners. Whatever clever guise you sport, you can't hide your divine shine, the spark inside the meat, the true you is known, felt and so appreciated. Welcome and Farewell. Until we gather again, know you are loved, your are cherished, the universe is standing by to grant our every wish, no kidding. Just gotta be clear and get the heck out of the way. I wish to end this episode, so watch how the universe cooperates with me, ready?