A podcast about movie making and the science fiction featurette, Daughter of God, with Director Shri Fugi Spilt, (Dan Kelly). Daughter of Godcast, Episode 044, Future. Ads are the ideal vehicle for apocalyptic tropes. 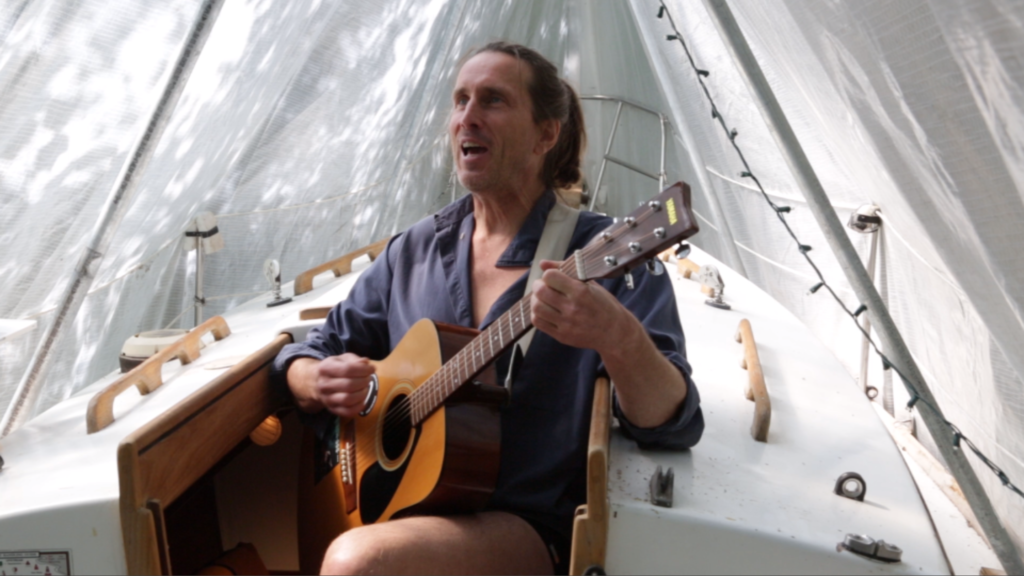 The 44th episode. That's a nice symmetrical number, a square four sides each 11 units long. As I've logged years, I've become more open to the pleasure of numbers. Twas not alway so, as a lad numbers chafed. Strangely though, I recall happily my memorization of the multiplication tables in Catholic school. I think the memorization, not the numbers was what appealed. That was my actor aspect waiting in the wings, the me that would enjoy rapid assimilation of dialogue and then forget the entire script a few days after the final performance.  Still remember my Catholic school multiplication tables tho.

All the interesting things humans come up with, like counting, numbers and mathematics. My stint as a coder made me way more numeric. If I had realized numbers could make pictures back in high school, I would have paid more attention in math class.

This episode should wrap 2014. Last week we went on a motorcycle ride and talked about swag. The Honda XR650 is my 3rd and a half motorcycle. I had owned 1.5 motorcycles before I bought the BMW GS1150 in 2003, from episode 007. That big black motorcycle went to heaven in 2004, in an uncanny turn of events that's beyond the purview of even a meandering podcast like this one. After that I was bikeless for 10 long years. In April of 2014, I promised myself a Honda XR650 AFTER I finished Daughter of God, but one showed up on Craiglist way sooner - in May of 2015 - just before my worst birthday ever. Loose an amazing girlfriend, gain a kick ass motorcycle. A fair trade, in hindsight. You can always find girlfriends but tricked out lightly used Honda XR650s are RARE.

Wedged in between love sickness, squirrel mites, elbow injuries, acting in other people's movies, trademark skirmishes and finding an Airstream for Keanu Reeves (yeah, that was in September) there was a lot of DOG in 2014. The deep archives were established, we shot a flashback scene with young Christina and developed the mediatronic boxes. Not only doing tons of exposition with the box labels but also discovering that they were the devolved internet, complete with ads.

At the end of episode 043 I shared a brief email  rant to Melonie about advertising on the mediatronic boxes. I talked about how they could be placeholders for every movie I ever wanted to make. Advertising is powerful and utterly irrelevant, so blatantly not about my best interests or this lovely planet's.  Thus the ultimate vehicle for every apocalyptic trope.

Take today's electronic billboards for starters. You'd think that full color animated billboards would not be appropriate along highways and busy urban streets... but there they are. Advertisers supposedly follow voluntary codes restricting these giant movie screens from displaying full motion, but really, how long can that last? Ever wonder about all the hype around self driving cars? Self driving cars are about making the roads safe for full motion billboards.

DOG's mediatronic box ads riff on electronic billboards. Extrapolating current trends, our built environments will eventually become overwhelmed with intensely irrelevant imagery. Humans will then adapt and become super skilled at ignore-ance, at not seeing even the most throbbing eye candy.

Christina grew up in hyper distraction, and is comforted by a chaotic visual environment. In her cabin, the boxes blink and flicker constantly, not only to identify their contents but to push extinct products and services from defunct corporations. Gerry grew up in the sticks and is less distraction tolerant. He has slashed most of his boxes, which renders them only able to display scrambled patterns, which he can cope with.

Another fun trope the ads offer is the inscrutability of the future. This was done so beautifully by Cory McAbee in American Astronaut. In a bar, a stand up comic gets the crowd laughing, but the jokes make no sense to us. That's exactly right. The jokes of the future would be incomprehensible to people of the present. Robocop had the mysterious running gag, "I'd buy that for a dollar", which the characters found hilarious but was never explained to us.

New technology, fresh terminology and slang, shifting social mores, political upheaval - there would likely be way too much change for us to get future humor without plenty of exposition, in-story explanations of the premise. Whether one character to another, a godlike voice over, giant text rolls...

The mediatronic box ads are both inscrutable and expository at the same time. Ha! They offer a smidgen of recognizable content surrounded by unfamiliar context, indeterminate, wide open to interpretation. One example (that even I can't explain) is mediatronic ad for Proslots 100. This begins with one word after another flashing on the screen CHECK OUT HER SLOTS GRANDPA. This phrase then appears over and over again, filling the screen from top to bottom, revealing a silhouetted female body. The words vanish and the silhouette reappears, bracketed by the words ProSlots 100. The female silhouette is alluring, even raunchy but the context is confusing - slots could be a play on words meaning slut or slot machine or perhaps a computer memory upgrade. Is this an ad for gambling, cybersex or what? We're left hanging and with luck we'll never find out. This ad might appear for all of 10 seconds on a random box in one scene. Hundreds of different ads and ad fragments will fire off during Daughter of God.

The theory (my theory) is that a virtuosic juxtaposition between the familiar and the unfamiliar vigorously engages the imagination. This is a variation on barely glimpsing the monster in a horror movie, or having lovers partially dressed in a love scene. Scary and sexy scenes are  intensified by a swirling of mystery. And the box ads are both scary and sexy, to be sure. Because scary/sexy is the essence of the future!

To invoke the future, movies like 2001, Alien and Moon plaster sans serif fonts like Futura and Eurostile over their props and sets. The words on the control surfaces and hatches are plain english, but somehow they convey an elegance or starkness that satisfies our expectations of what's coming.  But, what does the future FEEL like?  What's waiting around the next corner, tomorrow or five years from now, how does that question translate to emotional experience? We already know. Scary/sexy. That's what I'm interested in sparking. A perfectly appropriate audience response to these two powerful emotions kicking in simultaneously might be uncomfortable laughter. That's my measure of success.

Where did mediatronics come from? How did the space program get started, the internet, the tor browser and the deep web? The military. Beloved technologies in our universe are spin offs of the military industrial complex. So too mediatronics in the DOG universe. Mediatronics is introduced in one of the first scenes of DOG, as animated graphics on derelict armored vehicles, arrayed outside an abandoned nuclear waste repository. The ruined tanks and humvees are covered with mostly functional mediatronics, pulsing away messages like, "We come in peace" and "protecting parity for every gender, race and class". Here the aftermath of a fierce battle long ago, desolation and destruction, yet the solar powered mediatronics don't die, they flicker on, eerily.

A lovely opportunity for introducing the audience to premises of DOG, built right into the scene. Which is my ideal. Exposition is too often contrived, offered like a sledge hammer banging spikes into railroad ties. Gray matter is way more receptive than creosote saturated timber. I prefer to offer cues that trigger the zippy cognition that's hard wired into humans after millions of years coming up on the planet earth.

The Abrams tanks in this shot are fitted for urban warfare, a detail I only expect armor aficionados to pick up on. For the other 99.9% of the audience, the mediatronics depict scenes of idyllic city life, implying much - that these tanks were recently stationed in a more populated place, that they might have been moved hastily, and were engaged in battle before their mediatronics could be updated.

And where did I get the Abrams tanks and humvees for this shot? Did I borrow them from Camp Grayling in Michigan? In August 2014 I shifted the VFX approach from 3D computer models to miniatures. I'm talking plastic miniature kits at 1/32 scale or larger.

There's several technical reasons why I made this switch. I didn't have the latest 3D chops and competent 3D artists weren't falling into my lap in 2014. Perhaps if Michigan's film incentive hadn't been torpedoed in episode 034, there might have been an abundant talent pool. Mainly though, I wanted to do more with my hands. Almost every aspect of DOG post production involved staring at screens constantly - writing, editing, rotoscoping, compositing, sound. I do a lot of screen staring with this podcast too.

I had assembled scads of plastic models when I was a kid, remember that sweet HO scale the race car layout the Briggs brothers and I built in their basement in episode 036.

I decided to switch all the 3D models to miniatures, and started buying cruise ships, jet airplanes, tanker trucks - a diverse inventory of esoteric plastic kits. I found some super cool ones! Such a geek.

Everything isn't swathed in mediatronics, there's plenty of static graphics too. Signage for the big boat's crew advising them to watch for plague symptoms, improvised territorial declarations, edicts posted by provisional governments and lots and lots of graffiti, not unlike what we post on Facebook or Twitter. The desire to connect, even if it's just with the future. Leaving behind some sign that we too, were here. Regular folks - multi-tasking moms, angst-y teens, harried dads, thrivivors one and all.

You're assembling an eerily realistic miniature reality with another episode of the Daughter of Godcast, Episode 044, Future. There's a crucial big push happening behind the scenes and that means we'll be sharing shorter episodes for the rest of the summer. With luck I'll have full report in August. We're pretty much done with 2014 and already into 2015 a little, what with swapping girlfriends for motorcycles. Only 3 years left to catch up to the present. In several episodes I've thanked this person or that. I think now I'd like to thank everyone who has kept up with me for most of the last year. We're 8 weeks away from a year of podcasting and I'm kind of blown away. Who knew there was this much to tell? I didn't when I started, frankly. How much more human could we decide to become in 12 years? A lot more. I might have told this story even if no one was listening. Yet you HAVE been listening, so sweet to share.