Computer games: choosing to be a miniature person. As our characters run around killing monsters, gathering gold and treasure, upgrading abilities and armor — as they attempt to accomplish the quest and "win," did you ever stop to wonder who is watching them? Who is the mysterious presence observing every move our projected personas make, not only watching but caring about what happens, wanting excellent outcomes for what amounts to a little blur of pixels on a screen? Who opens the map, susses out the optimal path through the dungeon? Who chooses the best configuration of weapons and spells for triumph over the evil hordes? 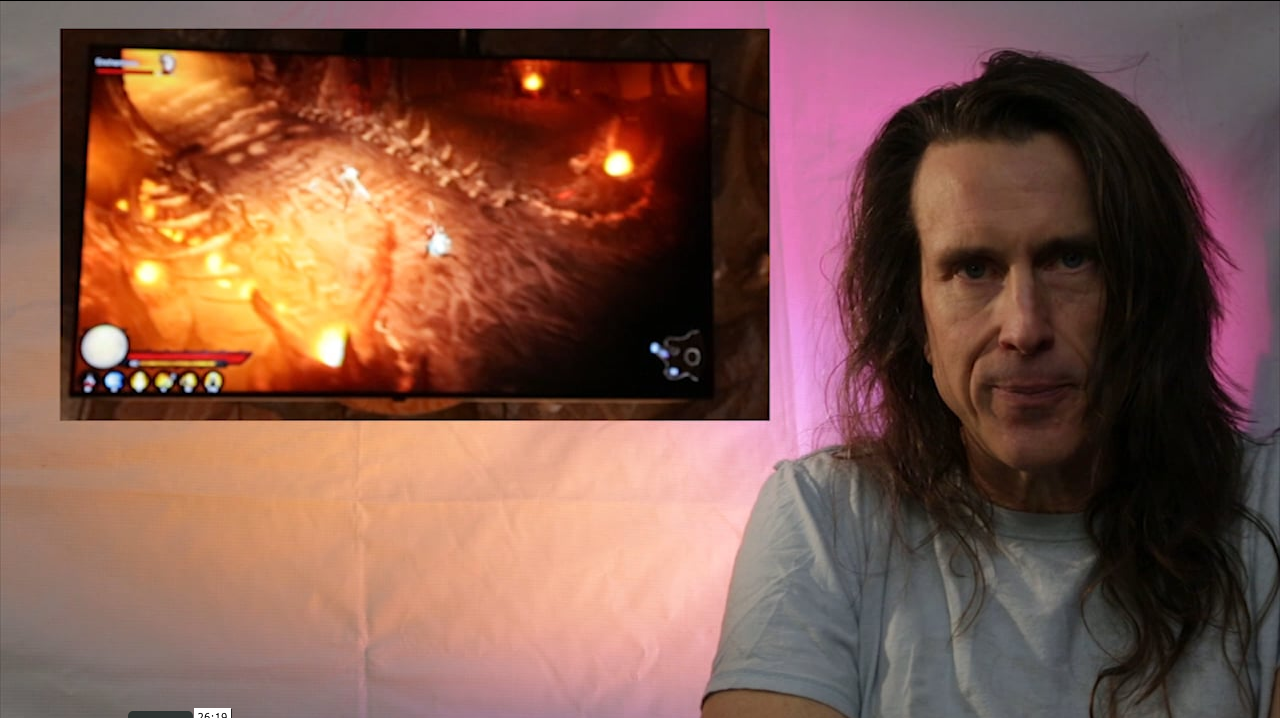 Whose hand is on that controller? Why, that's me playing the little guy, and I am also the witchy girlfriend who follows him everywhere. I thumb the joystick and push the buttons. AND if they die, I just respawn and play again.

That, my friends, is... (wait for it) an analogy. Imperfect, to be sure, but serviceable. What if we are the mere pixel smears? Who is the mysterious pervasive presence that I feel, as I am writing this, as I am speaking? I can feel attentive awareness all around, suffusing everything, bringing this scenario to life. That's me too. The meta Dan.

Careful now, this analogy is subtle. I am not the meta Dan's puppet, and neither are you controlled by your expanded self. The analogy points to a wider awareness; we are standing outside the game while still intent, deeply interested, involved. There's an experience beyond duality, just as this room is not contained in the code that defines the parameters of Diablo software on the Nintendo switch. I, Dan Kelly, am transcendent. I might fix a snack, take a dump, or laser the cat. The game knows nothing of these things.

Here's how I justify playing computer games when there's a looming deadline for a feature film. (1) as a means to bulk out my podcast episodes and (2) simulate spiritual epiphanies. Everything I do makes sense, is genius!

Imagine how much more fun life would be if we could feel the play, experience playing ourselves.

And, justification the third: (3) looming deadlines are exactly why computer games are efficacious; procrastination helps to soften my focus. Deflecting attention from an all-consuming goal gives those unseen hands an opportunity to help. The universe is handling all the details. My job is to stay happy.

Such a subtle transition into the pragmatic. We're already talking about the plan for movie completion. Simply stated — work less!

Episode 124 included a sneak peek of the charcoal weathering treatment on an M1A1 Abrams tank model, one of several miniatures in Uncle Joe's bicycle scene. The M1 was a low-cost Revell SnapTite kit that Greg built and primed. At this month's Great Lakes Scale Modelers Club in Traverse City, Greg and I brought in the Abrams and a Tamiya Humvee he's wrapping up. I also showed a mediatronic test using the Abrams and shipping containers I built. My secret agenda was to entice another one of the club's high-level builders to help with DOG miniatures. No word on whether we hooked him yet. Meanwhile Greg is also wrapping up a more detailed Abrams tank by Cyber Hobby. With the two Abrams, a Humvee, the shipping container, skeletons, and so on, we've got most of what's needed to block the shot and take pictures.

The movie's web presence, dog.movie, is trending toward fully fabulous. There's still a few transcriptions to fix and SEO descriptions to add. An update of the Best Beloved tallies since Season Two is nigh, so collaborators can be encouraged to redeem their blessings.

Getting myself a Nintendo Switch for Christmas isn't my only distraction that helps finish the movie. Temperatures here in the Northern Lower Peninsula of Michigan have been consistently below freezing (32F or 0C), and that means ice is starting to form on Crystal Lake. A lockup of the entire lake is the beginning of iceboat season. Yesterday I removed the last impediment to a full freeze, the big buoy. The lake had been waiting for me to retrieve the buoy before locking up with ice, and here's how that went down.

The other night at sauna club, my neighbor Mary and I were talking about how the lake was not freezing because my big buoy was still out. A couple of days later, she texted me that the weather for tomorrow, Saturday, was supposed to be sunny, blue skies and very little wind. Buoy retrieval was scheduled.

Grabbing the buoy requires scuba diving to put slack into the anchor chain and unscrew the link. I had filled both my scuba tanks in the fall, but on Saturday morning the big tank was somehow empty. No worries, the smaller pony tank probably would provide enough air. Slathering on coconut oil, I slithered into my 7 mil open cell wet suit, grabbed a pair of pliers, and hopped on a paddleboard. After breaking through the skim ice in the shallows, I paddled out the 100 or so yards and tethered to the buoy. Then I had a brisk round of harness disentanglement to get the pony tank on. On the very first descent, my antique regulator gave up the ghost and all the air in the pony tank was lost. Rather than abort the mission, I decided to try doing the job just with breath holds. This would mean more time in the icy water, but I'm a Wim Hof guy, why not?

To make a long story short, I eventually unchained the buoy and brought it in. So now winter doesn't have to wait anymore. Full freeze, here we come.

You've been listening and perhaps watching the Daughter of Godcast, Episode 125, Diversion, Season 4, Choice. Check this... A cat chases a little red laser dot even though he fully realizes the dot is a ruse, a trick. This cat plays for the sake of play, such a wise cat. We are each living a wonderful lie in the Ursula K. Le Guin sense. (See Episode 017, Anastasia's reading of Le Guin: "A novelist's business is lying.") What we appear to be is a ruse too, a story. Can we embrace this story, tell the most beautiful lie ever? Playing ourselves. A huge win?