Episode 098
King of the Earth

What are we doing here? We're watching scenes from a post apocalyptic romantic comedy and giving feedback. At least, that's the vision, the dream. In 2018, this podcast switched from documenting the inception and production of the movie Daughter of God into a collaborative, participatory cluster fuck through a scene by scene test screening on the world wide web. Season Two Crowd Creation has been a blast, a riot, a step in the right direction... but we're not quite firing on all cylinders, not quite yet. 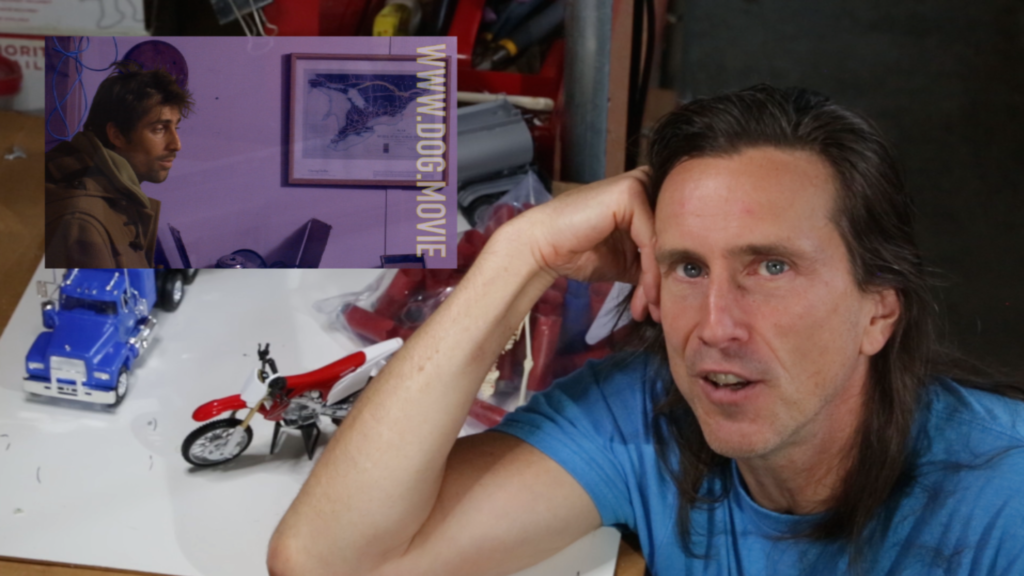 A couple of episodes back, we riffed on Philip Marlowe, author Raymond Chandler's iconic private detective, as an oddball exemplar of personal integrity and ethics.  He is also homophobic and slightly racist. A fictional character is always referred to in the present tense, because they never were, and always are. Who knows whether Chandler shared his character's occlusions, who cares? Life is nuanced and confusing. As divinity incarnate, we are each a craggy outcrop of contradictions, shot through with veins of both quartz and gold.

Let's drag out that clunky detective metaphor yet again, with a few lines from "The Adventure of Silver Blaze" by Sir Arthur Conan Doyle.

Gregory (Scotland Yard detective): "Is there any other point to which you would wish to draw my attention?"

Holmes: "To the curious incident of the dog in the night-time."

Gregory: "The dog did nothing in the night-time."

Holmes: "That was the curious incident."

This experiment of expanding cinematic production to include the audience, still feels like a sparkling epiphany to me. Test screening on the web could be the future for film generally. AND yet, feedback for DOG is tapering off, now that the novelty is gone. Offering feedback just isn't very compelling, not yet.

We're not giving up though, no way. The feedback we HAVE received so far is amazing, my movie making is much more fun because of this feedback. Well, then... how much feedback would be ideal?

20-30 comments a week would probably overwhelm my capacity to respond. 10-15 feels about right. 200 people tune into this podcast each week, so if just 5% of our listeners gave an opinion every episode, we'd be there. That's you, by the way. We want your comments and critique, especially if you're a feedback virgin. By we I mean myself and all  the other listeners to the Daughter of Godcast.  I'm scintillating out here all by myself no doubt, but the fun jumps up a magnitude or two when you join in.

I know asking for feedback is not enough. Contributing an opinion needs to get way more tasty, thrilling, inspiring, satisfying. I'm trying to discover how to make this as good for you as it is for me. Let's have feedback on the feedback, how can feedback be improved?

If you yearn for a more just, peaceful and sustainable human presence on planet earth, start here. Adventurous cinema awakens awareness and shifts culture. Doesn't get more zany and adventurous than asking the interwebs to do a scene by scene deconstruction and critique of my very first feature. We're improvising a breathtaking finale to 12 years of serendipity and stumbling.  AND the emergence of open source movie production. AND Learning to be fully alive.

Those are the stakes were playing for. Still tho, not enough to ask and not enough to riff utopian. Giving feedback has to be amazing, somehow. How can we do that? I'm asking the cosmos sure AND I'm asking you... and you... and you! 200 of the finest minds on the planet. The kernel of a transcendent gestalt consciousness, coalescent. Did you know that's what you are? This is the future right here, folks. You're it.

"watching her closely, seeing choices made – there are groans/creaks but no words."

"What groans/creaks? Still referring to god watching her?"

"groans/creaks; the watching presence sometimes expresses itself with a creaking door or a groaning (?) – but no words."

First, that God views duality through a distorted wide angle lens, grainy and full of encoding artifacts, as if divine surveillance is sub par, outdated, needing an upgrade. I am reminded that the greek pantheon of gods popped out of each others foreheads, so they must have had a birth date and are thus ensnared by time. They and their associated instrumentality (lightning bolts, golden chariots) eventually became obsolete. Maybe God has trouble getting the latest technology and has to make do with what’s lying around from Genesis. Or maybe God is just frugal, why activate 3D Technicolor Sensurround when security cam quality will do.

Second, that the language of God is unintelligible, perceivable only as creaks and moans. Either God is coping with a low resolution transmitter, (see above) or this is a deliberate choice by the creator, which could imply that noises carry far more information than any amount of words strung together. Which is why crashing waves and bird song is so intriguing and sublime. Or like the crickets in episode 052…

“Every word in the language of crickets means beauty. 10,000 words for beauty, more than inuit words for snow, just beauty, beauty, beauty. Like dour George saying his creed.”

Feedback from .5% of our audience this week. You have the power to move that from .5 to 5. Or let us know why you just can't be bothered. Everything helps!

Gerry's grousing stands in high contrast to Christina's flippant full steam ahead. He's angst-y and she's indefatigable. Do any hints of compatibility peek through?

I am here, weekly, supposedly. Making a movie, inviting you in to advise, energize, synthesize. Perhaps excise, as in remove surgically. Whatever feels pleasing, encouraging, insightful. Why do we come together? Because there's an adventure here, a mystery exactly suited to our unique curiosity. What we are ready for. I speak for myself and for you too, because I am the voice you've chosen for this perfect moment, the next clue. We are all guides and gurus for each other, as are rocks, puddles and gum wrappers. Anything can light up and be the next beckoning. Come with me if you want to live.

Episode 098 King of the Earth, Daughter of Godcast Crowd Creation. Riding the cosmic rollercoaster, we catch our breath, hold hands and exchange big goofy grins before being whipped around the next hairpin turn or flipped upsidedown. I do the talking and you do the listening apparently, mostly. A podcast about a movie that's making me and now making you too, because you're assimilating. You've decided this podcast is next dry stone to step to in your gamble across the babbling brook. Whatever I happen to be spilling out, that's you leveraging, improvising, following your bliss. We both pretend this was recorded by Dan Kelly, Shri Fugi Spilt, but I'm a fiction. This isn't me your hearing and maybe seeing. This is what a voice in your head sounds like, a lucid dream looks like. I'm an elaborate ruse you've cooked up to remember what you never forgot. I'm a magic you're making, a casting forth of quantum breadcrumbs into the future where only you can find them.