I've been rereading Raymond Chandler, stories and a few essays and turns out, (surprise!) that Philip Marlowe talks a lot like Raymond Chandler writes. As Marlowe describes his world with a decidedly poetic flair, whether chowing a wilted chicken salad sandwich or getting punched in the gut, I think we're getting Chandler's own worldview. 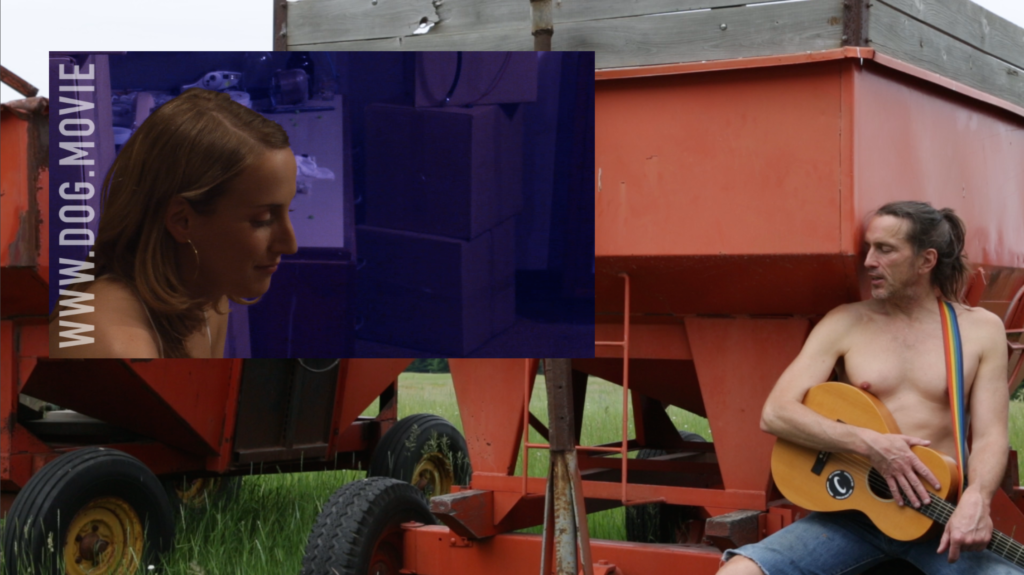 I wonder if Phil Dick ever had correspondence with Chandler? They had a bit of overlap, Dick was first published in 1955, Chandler died 4 years later. They both got their start in pulp genres, Chandler the hard boiled detective crime genre and Dick science fiction. Their characters explored dark worlds, truthful, authentic worlds of feeling.

I didn't do a comprehensive search of correlations between Chandler and Dick, but I have my imagination which is way better.

Phil was born in 1928. Raymond Chandler's The Big Sleep was published in 1939 and released as a feature film in 1946. Phil must have been exposed to Raymond Chandler, perhaps he was a fan.

PKD's The Man Who Japed is a sort of detective yarn. A creative functionary of a shiny police state wakes up one morning with foggy memories of running amuck. Turns out he murdered a statue. He ends up investigating himself, his feelings and discovers he has become an agent of change. Japed was written in 55 and published in 56.

Chandler's essay on writing detective stories, The Simple Art of Murder is a sort of manifesto for the detective genre. The main thrust seems to be, authenticity. Technical details, sure, but way more critically, emotional honesty. Which is really about the author's own life.

A lot of PKD novels feel like detective stories in this Chandler sense, characters staring at the mystery of existence, unraveling what the fuck is going on... as we all are. In contrast to PKD's Tire Regroovers, Artiforg Surgeons and Pothealers, Chandler's character Marlowe is a professional investigator, with a keen eye for detail, insight into human nature, handy with a gun...  but he isn't detached. Nor is he there for the money. He's an exemplar of personal honor, a monk from an esoteric order of which he seems to be the only member. In other words - a weirdo, an oddball.

In the lingo of the times a private detective is also a shamus or private dick... wait, Private Dick, PKD... Phil Dick. And Philip Marlowe and Philip Dick, weird.

Daughter of Godcast Crowd Creation also has our very own Seamus, so how about that? Double weird.

Howard Hawk's The Big Sleep and other film noir presaged Ridley Scott's Bladerunner, the movie that transformed Do Androids Dream of Electric Sheep into Phil's most famous detective story. Phil had cops or detectives as protagonists in plenty of other stories, like Flow My Tears the Policeman Said and The World Jones Made.

I find corroborative evidence of this in Phil's reaction to Bladerunner, as reported by Maer Wilson, Phil's friend and David Dyer who handled special effects on Bladerunner. Maer Wilson reports that Phil was skeptical of the Bladerunner project, and was upset that major elements of the original story were dropped.

In late 1981 Phil and Maer met Ridley and sat for a screening of Bladerunner's opening scenes. Afterwards Dick said to Ridley something along the lines of 'it's like you could see into my mind.'

I think because Bladerunner is film noir, and film noir flows from authors like Chandler. Phil Dick must have been influenced by Chandler, either directly by reading Chandler or from the cinema that Dick grew up with. Dick was writing science fiction noir almost from the get go. That's why Bladerunner looked familiar to him, because the future had already happened.

There's an idea, a universe where Dick and Chandler characters come to save the Earth. Working title, Future Again. Steal away, great artists. I got a million of 'em.

Meanwhile, what's all this got to do with Daughter of God? Nothing. We're just low on feedback today so I thought I'd ramble. That's a lie, no it's not. Ok, we ARE low on feedback, but certainly DOG might also be film noir, dark comedy.  A detective story, In the Chandler Dick fusion of investigating existence, ourselves sense.

Uncle Joe is bathed in red as he asks Christina to invite him in, which she declines to do, keeping a quirky silence. Feels like they are playing a private game. Eventually Joe breaks the stalemate by placing his hat on her head. Why does he pass the hat? What's the significance of Joe's hat for you?

Only anonymouse had anything to say.

[snip] it seemed that putting the hat on Cs’ head was reassuring to her that Uncle was in there ‘somewhere’ thus allowing her to let him come inside.

I asked for clarification

[snip] Are you saying that the hat establishes/confirms/validates Joe’s physical presence? Something like an ID – drivers license, passport…

the hat; a familiar and personal gesture of warmth and good humor.  [snip]

Very good, so more of an intuitive thing, heart recognition.

and there was consensus from Anonymouse

For anonymouse, the hat is about positive memories of past connection.

No magic, no Skinneristic reinforcement, no transfer of chakra energy through a talismanic technology, no life long grooming of Christina for an occluded agenda, no passing on of mantles, legacies, or sacred teachings. Just a nice fedora hat.

Nothing to see here, move along.

Gerry and Christina have achieved synchromesh somehow. Clearly there is now rapport and even chemistry. Tea is in the future, and maybe more. Gerry's last question and Christina's response implies that there might be some urgency, why do you imagine that would be so?

Daughter of Godcast Season Two Crowd Creation Episode 096, I Think So. Private Dick, Philip Marlowe, Philip Dick. Maybe Chandler met Dick in secret, and handed him the keys to the Tardis. Timelords overlapping. The detective paradigm expanded, all characters on Earth probing the mystery of their own lives, the inevitable corpse and the plotting of self murder, slowly through the ingestion of corn syrup or chronic stress worrying about your kids. Dark investigations into human nature, and comedy is implicit in human nature. Humor nature.  Laughter is the gods applauding the pageant of duality, a trap of our own making, caught fast until we tap out, or squirm free, defy our own ingenuity, foil our own meticulous plans. We battle ourselves for fun. The clues are within us, ubiquitous, smeared thinly across the electric sky. Every when. What a riot.

Before attending the screening of Bladerunner with Maer, Phil wrote an effusive letter after seeing a few scenes from Bladerunner on a TV show.  An interesting letter considering Maer's account of how disappointed Phil was in the direction of the project. Makes sense that Phil would be supportive publicly while keeping his misgivings private... still tho, a far reaching and visionary statement after only watching a television segment, his screening with Ridley would happen months later. 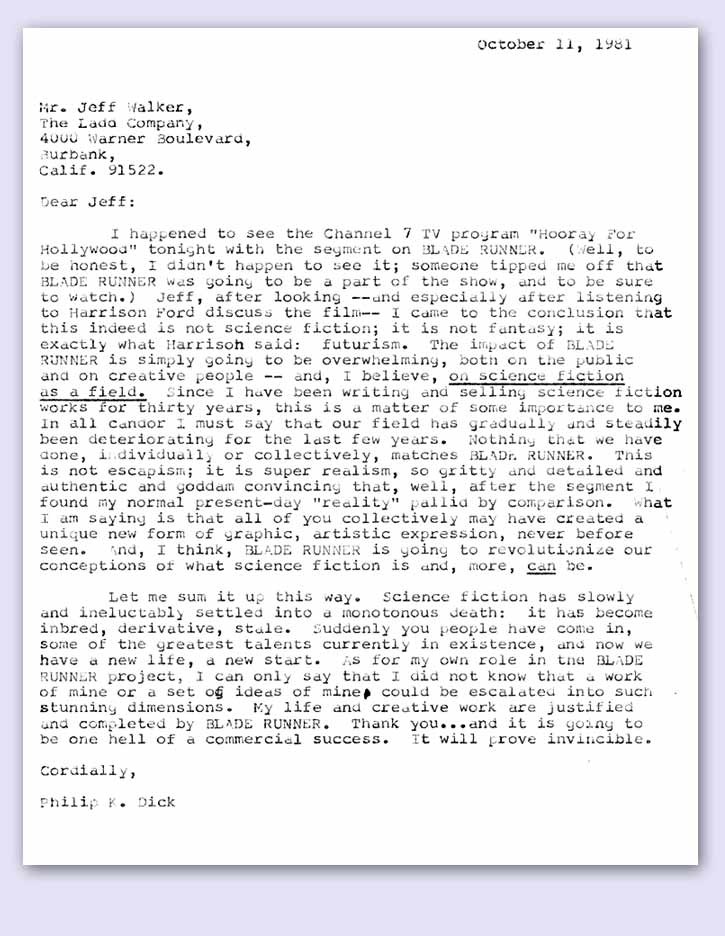 One last thing. I couldn't find the Hurray for Hollywood show that Phil watched on TV, but I did find a mediocre segment with Harrison Ford and a clip from Bladerunner on Late Night with David Letterman. Harrison was not sparkling. His interview on Hurray for Hollywood must have been way more compelling to have gotten Phil so excited. If only we could see what he saw.