I slept in Keanu's Airstream the other night with rain pattering down in full surround sound. An energetic immersion of splish, drip and splatter while curled up warm and cozy. A delicious dichotomy all night long, then waking up electric and happy. Life at the movie studio.

Welcome to 095, Can I Come In, Daughter of Godcast Season Two Crowd Creation. 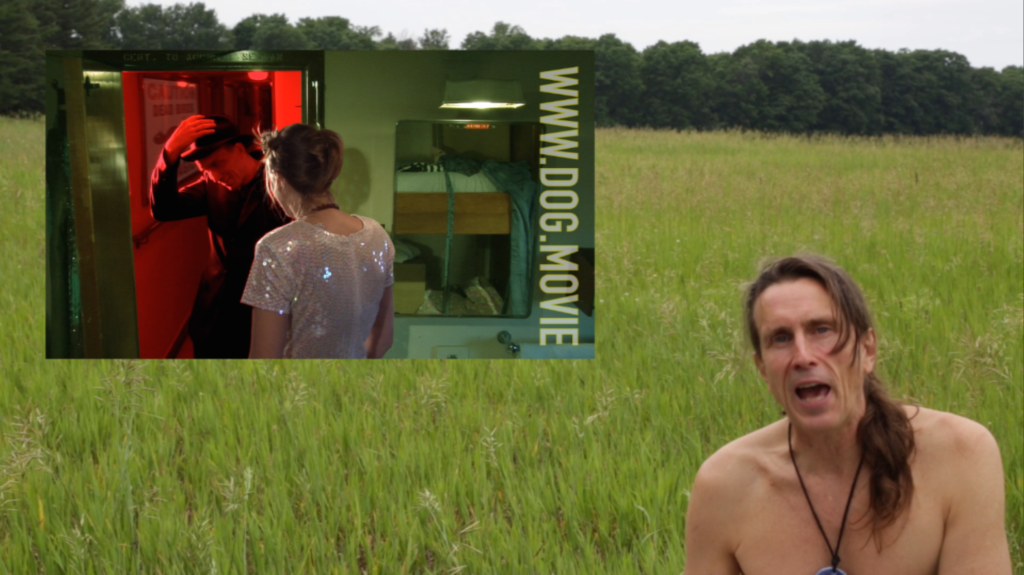 In 094 Grown Up Ghost we considered an orphaned fragment, a scene that has no movie, yet. The request we made then was for help discovering how Grown Up Ghost might be reclaimed. In episode 095, we're sussing out Grown Up Ghost's destiny, antennae quivering with feedback and then offering a related scene, Can I Come In.

Originally, there were three story objectives for Grown Up Ghost. The first was to give Christina Joe's hat. The second was to establish the PKD theme and the third reveal Christina's unique experience of reality. These last two have already been touched on in prior scenes, so they are not primary outcomes. Aside from the hat, what's Grown Up Ghost driving at? I am not sure. I see a wooden Buddha, crudely carved but with a secret gem at the heart.

Because Daughter of God is resonant with all creation, asking for feedback on Grown Up Ghost  is like reading a spread of tarot cards. We receive opinions and comments knowing that everything is redolent with the essential, even or maybe especially flippant wise cracks, disinterest, and digressions. Everything is a finger pointing to the ineffable.

Let's read the scattered bones, the swirl of tea leaves and find out what the feedback REALLY means. Rediscover what this scene might be about.

Frank via FB got things off to a promising start.

"For some reason I don't get a "vacation" type vibe.. more like they are traveling with a purpose... such as visiting family.. or they're on the run, but they seem too chill for that."

Not a "vacation" vibe. Traveling with a purpose. On the run.  Frank's take feels spot on for me. This scene is slightly charged, or should be. Are they even traveling? Perhaps they are waiting, biding their time, letting a catastrophe pass them by. Perhaps this is training. How to hide, how to be ready for what's coming. How to pass the time.

Perhaps this moment has significance in the outside world, where were you when? I was in that sailboat with Uncle Joe, he was reading me a story, and then... WHOOSH! Paradigm shift.

What if the movie opened with this scene, fragmented and slightly contradictory, maybe reversed left to right and then back again, wavery. How would an authentic memory feel for Christina?

"LOL is that the boat in your front yard?"
This is Tony's first foray into feedback, so we gotta cut him some slack. Aside from earning his wise ass merit badge, what has Tony revealed with his question?

The actual boat is indeed on a trailer at my house. In shooting the scene, no attempt was made to make this boat seem to be in open water or even moored. Creating the illusion that the boat is floating would not be trivial. The plan was to establish this as a the grounded boat by adding an additional shot of Uncle Joe stomping up the gang plank. Tony's remark emphasizes that whatever reason Christina and Joe have for being on the boat, traveling is not one of them.

Jil via email was concise.

[snip] "The scene with Uncle Joe and Christina was not interesting to me. Philip K Dick is not as interesting as dialogue written by Dan Kelly. At all. No" [snip]

Jil is opining that the scene is BORING, doesn't have anything to offer her. She doesn't care where and why they are. She's saying I am the only one who CAN know,  she wants my words, my vision. The PKD reading can't be the point of the scene, only a vehicle. Even if they are not traveling physically, his words could be their water. Is it raining, at least? That would be a good reason for them both to wait.

I've never read PKD's The Builder, but I did include Wikipedia summary in the transcript of 094. About a guy who builds a boat without knowing why.

Finally, we heard from stalwart Seamus via dog.movie. He had a more meta response to the where and why question.

[snip] it’s the reason Christina decided to live on another boat later. She’s drawn back to her younger experiences. [snip]

For Seamus, the point of Grown Up Ghost is to explain adult Christina on the big boat. Because why would anyone live on a boat unless they had positive childhood associations. I gently pointed out to him that boats have all manner of worthwhile qualities when considering pre and post apocalyptic scenarios, but he knows I know he knows that. He's making a point, we want her to love boats. Which takes me a little deeper. She loves boats because boats have always meant protection, adventure, survival. There is no stable land based culture by the time she comes of age, at least not one she wants to be part of.

Then there's the whole Jesus as a fisher of men. That's how he got his start, preaching to water folk, boat people.

And going on from thence, he saw other two brethren, James the son of Zebedee, and John his brother, in a ship with Zebedee their father, mending their nets; and he called them. Matthew 4:21

What I've learned from the feedback is that Grown Up Ghost is a beginning, perhaps the gentle start of a big shift. There could be rain, pitter pattering, or the suggestion of rain, or hints of a deluge to come. Signs of change. A shortwave broadcast in the background could be giving warnings of an approaching storm front, flooding. Here there are on a boat, waiting. When the waters come they'll be ready. When whatever comes, they'll be safe.

Perhaps cut to shots of heavy rain as the reading continues, PKD talking about the blind beggar being an alien entity and that the boy was protected from then on. Images of the boat rising above street signs, house tops, into the sky. Volcanoes! Earthquakes! Stock footage. All this not even shown, just implied. Claymation. Dream-like. Molten lava light reflected on brick walls, or pop machines. This was a memory after all, or a composite memory entitled, "How it felt to grow up during the changes, protected." By a dead Uncle. Because didn't Uncle Joe die around this time in 078 Best Scenario Yet?

A jumbled montage, a torrent of imagery triggered by this reading. Reaching a crescendo then stop. Satellite over the Earth, silence. Title : 12 years later...

Ha! That's enough for now, I think we'll let this one simmer for a week or two and revisit.

Uncle Joe is bathed in red as he asks Christina to invite him in, which she declines to do, keeping a quirky silence. Feels like they are playing a private game. Eventually Joe breaks the stalemate by placing his hat on her head. Why does he pass the hat? What's the significance of Joe's hat for you?

That's Episode 095, Can I Come In, Crowd Creation Daughter of Godcast. This episode title reminds me of Let Me In, and Let the Right One In, amazing child vampire movies, gorgeous and intense. I found these movies long after I wrote, shot and directed this scene, so it's eerie to discover I was hooking into a popular vampire trope, that of vampires needing an invitation to enter a home. Joe's hat is the ticket in.

What's up with that hat? Humphrey Bogart as the savvy Philip Marlowe and Harrison Ford as Indiana Jones, the James Bond of Archeology had hat's like Uncle Joe's. Marlene Dietrich in real life and Diane Keaton as Annie Hall. The fedora is an American icon, signifying what? Hats are also like halos, extending cognitive energy beyond the skull, a wool aura. Worn with a jaunty tilt, they remind us of flying saucers, radar dishes, the DOG icon. Life in black and white, an age of iconic cinema when fedoras ruled the so called civilized world. We knew what competence looked like, back then.