Hail humans in time and space, the DOG is with thee. Blessed are they who call her friend, and blessed is our feedback coming soon, for all scenes.

Daughter of Godcast Season Two Crowd Creation and this is Episode 094, Grown Up Ghost dropping on June 13, 2018. We're now a little over halfway through the Chinese year of the DOG. Just 6 months left to wrap our DOG, or Daughter of God and that's exhilarating, intense and all sorts of wild. We've been making steady progress, plenty of cinema offered and feedback received.  Poised for a triumphant climax, the big finish yet STILL quite an adventure ahead. An even more thrilling ride about to begin, and we're standing check by jowl at the helm, the tiller, the steering wheel.  We're all gripping the spatula, the joystick, the paintbrush. Everything depends on us. We can do this. 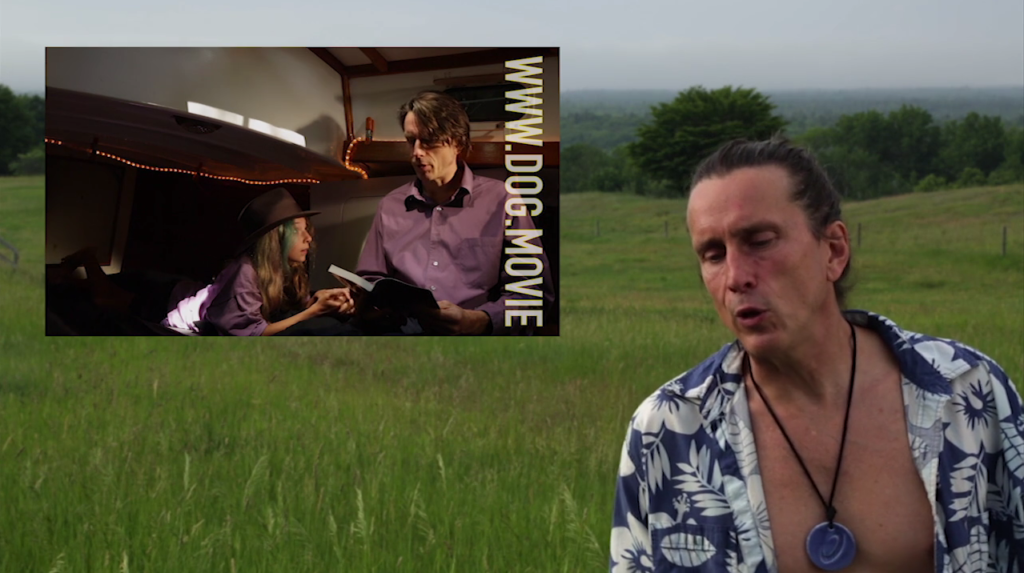 Episode 093 was another respite from the constant barrage of scenes. We went Low Level and looked at some charcoal drawings of the shots in Welcome Back, a drastic simplification intended to hone our compositions. Intriguing shapes and engaging designs. Plus taking suggestions for even more post apocalyptic props.

Susan Gallant, no relation to the awesome and extremely short lived episodic musical Galavant on ABC, offered this via Vimeo...

"It would be cool to see your DOG logo in the sky in some of these shots. Maybe she is getting on the boat at dusk. I really love that you filmed your drawings and explained and or gave people the option of throwing ideas in."

[snip] "DOG logo - in the first shot of the big boat, you can see the moon in the upper right. Perhaps there's a way to tinker with that." [snip]

Susan's saucer in the sky idea is fun, I wonder if her suggestion can be plugged into the contraption that Gerry's messing with? Perhaps the dish antennae catches the dawn light and flashes, or maybe the device is pumping out tiny halos that drift up and away, kind of a variant of the electric discharges in the original 1931 Frankenstein.

Maybe Gerry's device is a beacon, projecting a holographic halo into the azure dawn sky like the Bat Signal. Another approach would be to just enlarge the moon and then alter the crescent to suggest the halo. Maybe a cosmic cataclysm has changed the appearance of the moon.

How would these different options alter or expand the story? For example, why would Gerry project a holographic halo in the sky? Maybe he's signalling the crew of the big boat to return from their scavenging expeditions, that's why Christina is coming back.

I could have a blast imagining how your suggestions might auspiciously integrate into the existing scenario. I'm a little bit surprised by what an expansion whore I am, I never suspected I could feel so confident about grafting disparate concepts onto this movie.

Were these concepts already there? Latent, dormant ideas just waiting for a few raindrops to sprout. Maybe this is my film future, building framework movies that attract supporting structure and rich detail from the cosmos.

"My recommendation is to be careful not to clutter the scenes. I like most of the ideas for Christina walking along the path, but the notable skyline and skeleton are unnecessary. I also like the ideas for her approach to the boat. As she’s passing down the hall, I like the mediatronics on the boxes, but I don’t think there needs to be anything out the window. Sometimes, less is more."

"Agreed. We’re exploring the frontiers of density, the operating theory is a scene can be packed with detail and still have prominent focal points, delivering the essentials and advancing the primary narrative. Less can be more, and likewise, more is too often less." [snip]

Yin and Yang, less and more, detail and simplicity, on and off, charcoal and newsprint. Together we'll find the sweet spot for Welcome Aboard in future episodes.

This episode we've got a new scene, Grown Up Ghost.'

To be frank, this scene was recently orphaned by feedback on previous scenes and I'm looking for inspiration about how to reintegrate, with serendipitous extra sensory perception from y'all.

A younger Uncle Joe and Christina aboard a boat, perhaps a small cabin cruiser. He's going to read a Philip K Dick novel to her. There are no obvious clues as to why Christina and Joe are on a boat, or where that boat is. What would your guess be about the why and where?

Synopsis of The Builder from Wikipedia.

The story centers around a man named Elwood living with his family in 1950s suburbia. He builds a boat in his back yard, to great annoyance to his wife and neighbors. When they ask him why he builds it, he tells them he doesn't know. Elwood exhibits post traumatic stress disorder, and shuns most people around him, including his family and co-workers. One day, he decides to go home in the middle of his job to work on the boat. He gazes at the boat, wondering why he's building it. As it starts raining, he finally realizes why.

That's 094 Grown Up Ghost. We're collaborative movie making, apparently me and Seamus mostly, plus Jil and a smattering of Susan and Anonymouse but appearances can be deceiving. In the most remote nooks and crannies of our spherical starship, humans are hoovering up this podcast on the sly, soaking up the scenes stealthily. Perhaps they are waiting to see whether this project,  long delayed and repeatedly paused will ultimately go down in flames. Maybe lurking is a way to stay safe, uninjured by a maelstrom of wreckage,  far from the sucking vacuum of imploding dreams. I  don't present as an epic hero, but making my first feature is certainly an epic undertaking.  I return either with my shield or upon it, I could have stayed a slightly eccentric middle age privileged white male or let this movie make me. This movie can make you too, there's room enough for everyone. Her shield is huge!