The Daughter of Godcast Season Two Crowd Creation is on the air! We would rather be in the cables, fiber optic and copper because constant cell and wireless exposure could be hazardous to your health. If you don't have the option of a hardwired connection, try downloading these episodes and listening and or watching offline. This has been a public service announcement.

But being human is all about risks, right? Plus wireless connection feels like the future - we just call out for what we want and Google answers, or the pizza guy delivers or our girlfriend sends a sext. Wireless internet is the cosmos in miniature, modelling our meta, the possibility of being connected to all things. 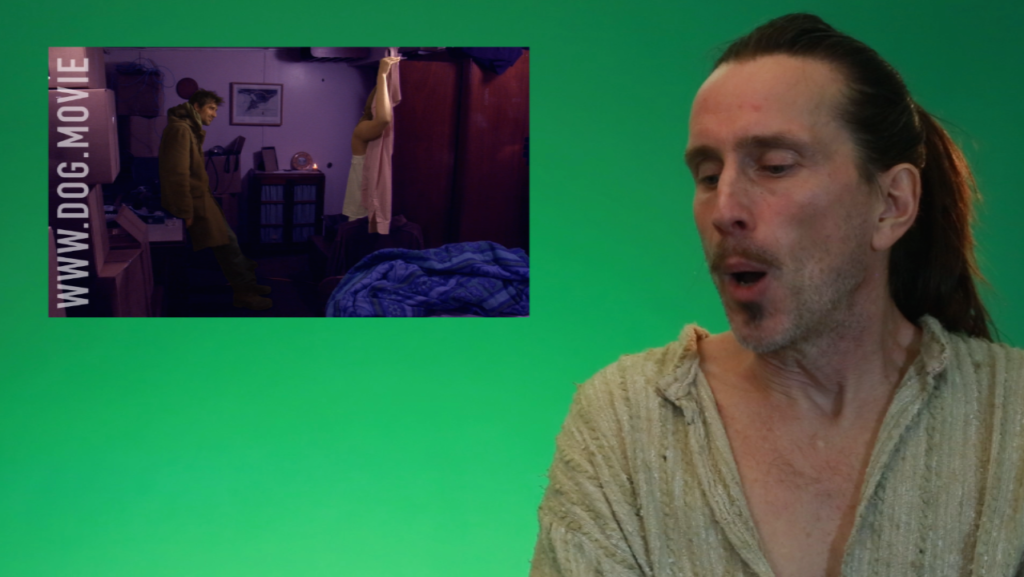 This is episode 082, V2 or Version 2.0. This episode is historic, rather than introduce a new scene, we are going repost Drawer from 081 with changes driven by your feedback and see how Drawer V2 changes your experience.

Last week, I ran out of time getting Drawer ready for posting. I didn't do the usual polish, fixing glitches and trimming rough edges. I was a little embarrassed posting Drawer actually, and at the same time intrigued by what might happen.

Scott T and Kirk C expressed an interest in getting under the hood of Crowd Creation, to see how feedback was effecting my choices. There's lots of feedback on Drawer and since I wasn't particularly comfortable with Version 1.0, I decided to act on that feedback and revise immediately.

Feedback question – Besides the man and woman, what other characters are active in this scene?

There are now 4 principles of Crowd Creation, check them out at dog.movie. Principle 3 states that when you describe your experience with a scene, your feedback is always valid, correct and appropriate. Doesn't matter who you are or where you are coming from.

Some of our commenters are all about the big picture, the grand pageant of characters and their inter-connections. Others are highly tuned to subtle details, nuance and celebrate an auspicious aesthetic meshing. If I post a scene with ragged edges, they'll chafe, raise a red flag. Let's start with them.

"They look a bit super imposed as none of the light on their bodies reflects the purple, it's distracting, kind of removes you from the experience."

Kirk via dog.movie was more specific about the color correction critique.

(snip) "key framing could use a little touch up if possible." (snip) "There were (snip) glitchy elements/fragments (in) the woman’s hair during (snip) .33 to .34 (snip)
Just out of curiosity though, why did you choose to green screen them into the scene instead of just shooting them in the room? Or is it a mixture of both?

Kirk wasn't clear on the VFX techniques involved, but he could see problems and provided clear examples.

Kirk was both diplomatic and encouraging regarding the sound mix.

"The audio could use some adjustments. Some sounds seemed exaggerated and also a bit rough at times. And other times (the drawer opening at the end) needed more sound."

Both Seamus and Susan assumed I knew the sound mix was not optimal...

Seamus via dog.movie was very matter of fact

"The audio needs editing, but I think you’re probably aware of that."

Whereas Susan via FB packed a little more punch.

"What's up with the sound?"

Tim starts off by saying he doesn't know "what they need to do", but runs with the premise that it's about sex. Tim is also not sure about the drawer,  opining that the woman is either "disappointed" or "had to sit down to take it in." Opening the drawer triggered a significant emotional shift for her, but Tim's unclear what that was. "God" had no resonance.

"She wants to, he doesn't. She is thinking out loud as she says God...as in god, he'd rather be reading. Apprehension all around."

Lori is clear that this scene is about sex, and that the man's not interested. The woman says "God" because she realizes the man would rather be reading than have sex with her. That's a fascinating intuitive leap by Lori, the appearance of the books wiping out the woman's agenda.

"It’s almost like they’re both thinking out loud and inside each other’s brain just a little bit. She has more courage than him though."

Whoa, "thinking out loud and inside each other's brain." That's opens up more story for me, more information about both characters and maybe their environment, circumstances. Why would they both be thinking out loud? That's like taking to themselves and when does that happen?

Lori lauds the woman as having "more courage than him." Then this zinger...

"Like Dorothy she is surrounded by purple she’s no coward."

Wow, Dorothy from the Wizard of Oz, obviously. In contrast to Joe, Lori embraces the color correction, the purple either empowers the woman or is a signature of the woman's power. Super cool.

Pam via FB observed the woman's detachment, "Like she's going through the motions (although what motions I cannot guess)." (snip) "she is moving in a dreamlike state sometimes" and pulling the drawer open with her toe "underscores her detachment."

Pam also opined "her speech and demeanor emphasize how slowly she is absorbing everything around her." (snip) "I am glad to see her finally react with some emphasis when she discovers his hidden cache of science fiction novels in the drawer.It awakens some awe in her that of course I want to know more about, God or no God."

From that final quip, I'm getting that the God reference has no relevance for Pam either.

Kirk pasted lots of elements together to come up with a theory of God.

"This addition furthers my curiosity from the rabbit and dog segment. If I put 'you remind me of someone…' and 'it’s God' together, mixed with “'look, we just have to…' and your feedback question for the previous scene, it really leads me to think that they’re offspring would be the Daughter of God or she is referring to him reminding her of her father (God)…"

Bravo Kirk for an intriguing assemblage of diverse clues.  I'm not sure I follow the logic on how all these connect, but I love your tenacious fitting together.

Both Seamus and Scott opined that the pink shirt didn't belong to the man.

I love the way she is deftly merged into the door of the wardrobe as the scene opens... (snip) The guy is so carefully unengaged, while she wraps herself in the lingering vestiges of someone in the shirt she is caressing... it surely cannot be the parka wearing, eye rolling fella....

What about the owner of the pink shirt? Is it his? Is it hers? Is it someone else’s? (snip) I’m not sure this guy’s into pink.

Scott and Pam also like the foot pulling the drawer open, and Scott seemed to suggest the foot move could be a sort of ritualistic invocation.

She seems to be trying to convince him of the rightness of whatever it is they are contemplating, without trying too hard... The appearance to her of GOD, not needing an arduous trek up to the mountain top, does require a balancing act, replete with a tricky (snip) maneuver of opening the drawer with her tootsies.

Both Seamus and James addressed the feedback question - Besides the man and woman, what other characters are active in this scene?

James via dog.movie " 'you remind me of someone', there is someone unknown here."

Well, the obvious answer would be Mr. Old Man Hand from (Best Scenario Yet). The P.K.D. novels are a giveaway. I’m starting to gather that he was Uncle Joe, and the little girl was Christina. Then, of course, there’s God, whatever that means, who Christina mentions explicitly. (snip) "She says he reminds her of someone. She may be referring to Uncle Joe, which, in context, might make the scene even more awkward, but then again, she might not. Who is the mysterious person he reminds her of? Some former lover, like the man thinks? Someone else entirely?"

Someone else entirely? Maybe. James also offered this intriguing tidbit.

And the characters on the books.

“The characters on the books”… Who do those books belong to? Probably not the woman, as she seems to discover them. If the man, and assuming he’s read them, do you think these fictional characters might be influencing his actions and perspective?

Can characters from books invade a movie if their books are featured prominently in a scene? Who knows really what goes on in fictional universes? I like this idea.

Ok, here's Drawer V2. Talk about whatever you feel. Or answer this very simple feedback question. What's new in V2 for you?

Wham, another episode 082 V2 Daughter of Godcast Crowd Creation. I wonder if feedback will change for V2. Whether tuned to technical subtlety or not, everyone's experience is compromised by rough edges. Scenes are nothing but a synergy of myriad technical details. Editorial, color correction, sound mix and VFX all come together to change recorded performances by actors into the experiences of actual people unfolding in the moment. When these elements are jangled, the story looses momentum, actions and consequences get muddled, character motivations become more confusing, the entire scene looses power and umph.

Here's some feedback that won't change.

"Lol. I have watched this so many times now. I love it when the guy makes the exasperated sound."

That's from the characteristically enthusiastic Jil. Join Jil and all the rest of our real life characters and give us some feedback love. Ciao!