Well, hello again! This is the Daughter of Godcast, Episode 076, Do It Again. So much beauty and fun to share in 10 minutes. We're dusting off a scene each week, making a flurry of creative choices, and if we can keep the podcast under 10 minutes, there's just enough time for smoothies and the occasional hot bath. This season of Daughter of Godcast, the Crowd Creation I'm offering less homespun visionary rambling, but since we're still making this movie, I'm still making me. There's constant clarity coming from feedback because we're learning as we go.

We've demonstrated that Feedback makes the movie better. We're finding out whether a scene is working and if not, how to tweak. New horizons too, where a scene could go, wants to go.

We are also learning how to get feedback in the first place. Episode 075 we looked at Smart Money and gave a bit more backstory than we usually do. Feedback was plentiful and inspiring. Can we know why? 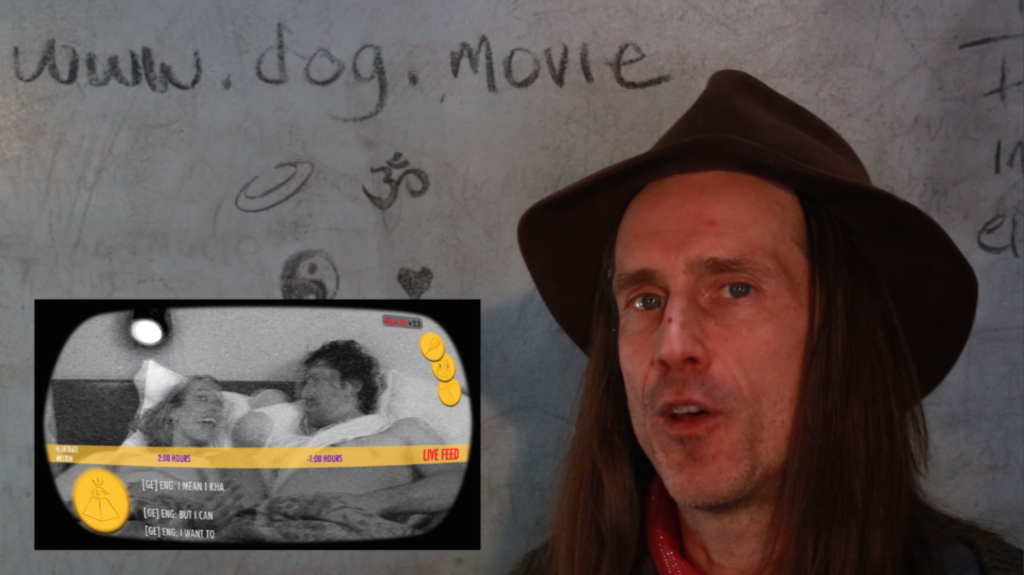 The answer is probably as simple as, there were gorgeous Trilliums in the thumbnail for the video and the third shot had an intriguing pull focus from Trillium flowers to 20 dollar bills. Several people wrote that they dug the change of focus.

Reading and pondering your experiences is way more fun than analyzing the data across all social media platforms, the play rate and impressions and all that. But this data might give a sense of whether the scene is capturing the cognition of acquaintances and perfect strangers. I'd love to have feedback from other continents, especially where English is not the native tongue, and I'm expecting these new collaborators to show up easily and organically. Is analyzing the data helpful or a geeky distraction. The only way for me to really know is to check in with how I feel.

Right now, I feel like fast forwarding the numbers and skipping the question of whether analysis feels like a party or not.

Facebook 123 people reached, 34 minutes, 96 views. I'm making assumptions about what these numbers mean, here goes. 96 views / 123 people reached = 78% of the people reached played video, which could be comparable to VImeo's playrate. Since Smart Money is 26 seconds long, then 34 minutes / 26 seconds = 78 plays, or about 81% of the 96 viewers watched the scene right to the end. Executive summary - 80% of people of Facebook friends played the video and watched to the end. The opening thumbnail of Trillium flowers probably started the ball rolling, and my guess is the third shot, pull focus from flower to money, was intriguing enough to hold their attention.

Vimeo has an engagement graph that shows how long people watch. Of 16 plays, 100% of the people watched to the end, with 47 impressions. In contrast to Facebook's play rate of 78%, Vimeo's play rate was only 34%. There's still a lot of variables that I don't understand, and loading the video directly to Facebook cuts off Vimeo's data. I know you all love numbers and math, maybe someone who actually knows what it all means will get in touch.

I've been unsocial on Ello for the last 74 episodes of Daughter of Godcast episodes, just posting, posting, posting. I've got 42 followers supposedly, but I can only see 14 or so for some unknown reason. Last week I started doing outreach on Ello, exploring other artists, liking their work and following a few. Afterwards, views on Ello for Smart Money dropped from my usual 100 to 30! Is there a correlation between me getting inspired by other artists and the community getting less interested in my posts? Is there such a thing as coincidence? Not in this vibrational universe, there's not. Future Ello explorations are going to be way more provocative and zany.

Just to round off, I'm going to mention the 27 impressions on Twitter. Twitter has a lot of famous people holding court which is intriguing but truth be told I'm haven't quite got the hang of Twitter, yet. My main account has under 200 followers.

Somewhere in a grassy flower dotted field, federal reserve bank notes and rotting leaves co-mingle... There was useful critique for Smart Money but most of the comments pushed the scene in totally new directions.

a cashless society where in all transactions are monitored and the end of the black market/free market systems of free exchange and the entering into the new frontier of an eerily ultra tech panopticon system of a distrusting and suspicious life/world.

I admit, I had a vague notion of the darker aspects of Smart Money, but Joe really fleshed out the full dystopia. This is more poignant for me because Joe's dystopia fell, and the sentient bills have no purpose - no transactions, no one to track or report on. They are adrift in eternity. Now compare Joe's take with Scott's via Vimeo

I'm watching three squirrels and a Pileated Woodpecker vie for the fresh suet cakes I put up last night... wondering if the Smart Money were there at the base of the big oak tree, would the SM show an adaptation to it's new role, it's new environment... would it be Darwinian adaptation wise and be giving counsel to the suet feeders... siding with the numerical underdog (woodpecker) out numbered in this early morning rumble, or the squirrels, facing the prehistoric bad-assery of the foot long Pileated with the three plus inch power bill.... maybe the Smart Money adopts a conciliatory tone, working out a compromise and way for all to save safe... I like the notion of partly sentient money, acting as a Zen counselor to whomever passes by it's immediate resting place.. adapting, making friends, surpassing it's intended creation... morphing into a force of good, and not just a a vessel for regenerating itself and others of it's species....

What?! How cool, I definitely didn't imagine that. Rather than lie uselessly on the forest floor, they learn to serve the économie du jour, wilderness. They uplift the animals around them, they become mediators, rapport channels. They repurpose. This reminds me vaguely of the novel City by Clifford Simak.

Two very powerful visions of what this scene could be about. Wow.

Melonie and James both commented on the beauty of the scene. Melonie wondered whether the bills would feel tranquil or frightened. James glued on a whole bunch of new backstory.

The money looked too fresh and clean to be at the bottom of an aging forest, but then when the eyes blinked, everything made sense: This futuristic money is not made out of paper that would break down, but rather some sort of polyethylene paper-thin composite that was created to enable a moving cryptic image. Due to their synthetic structure, the bills are not decomposing; they still look very much alive even though their value is dead.

Yes, that's exactly right, precisely what I had intended. Actually, I didn't weather the Smart Money because I was feeling lazy. Here's my reply to James.

That helps a lot, I have been pondering aging the bills, but maybe less is more.

“They look very much alive though their value is dead.” Wonderful, I hadn’t thought of that juxtasposition, brings up some new ideas.

Pam offered that the eye moving would have been a freak out moment had she not read the backstory first. We can schedule theater tests to see if there's a freakout moment for first time watchers without backstory. Freak out moments are sweet!

Something about this scene gave me the distinct impression that some creature had evolved to camouflage itself against cash, and that it was about to slurp down a delicious slug.

Seamus's idea is way beyond Daughter of God's scope, pretty much the premise for a whole new movie. Narrated by Sir David Attenburough, maybe.

He also opined about the bills' emotions.

As an alternative impression from the bill, the way he was positioned beneath his comrade made him look like a frightened child peaking up from beneath a blanket.

These excerpts are tantalizing. All the feedback from every platform is consolidated in the comments for that episode, as a reference for the post production elves when these scenes are polished. Check them out unabridged.

A grainy live feed of lovers in bed, hair mussed, clothes askew. Their conversation is being transcribed on the fly, data is scrolling. Odd symbols are overlaid on the video.

Question - Why would anyone want to peak at this particular moment? General impressions and random observations are as always, very much encouraged.

Zero backstory this week, just you and this sexy mystery. If you've never feedbacked before, this is your big chance!

You've been listening to the Daughter of Godcast, Episode 076 Do It Again. Forget analysis, let's talk about feelings. First, my feelings. I am so excited to be getting such abundant feedback from perceptive people. Friends, artists, cinematic peers, visionaries... what a boon for this project. Feedback is making this movie, no kidding. Your contribution of cognition and insight powers the creative process. Am I having fun? Am I ever. The scenes are flowing and growing and I get to say hello every week. Progress, momentum and best of all sharing. We're doing this together. Even if you've never commented on a single scene, I don't have to do the data to know you are out there, Asia, Africa, Europe, South America, on the oceans, in the atmosphere, low earth orbit or even off planet, you're signal is coming through, your attention is noted. You can be shy, you can hang back from commenting and just lurk, be Boo Radley, the shadowy fan.  You're still a huge helper, you too are making this movie.