Welcome and welcome back to the Daughter of Godcast, a podcast about the making of the longest little movie ever, Daughter of God. This is Episode 072 Date Dance, the second episode of the second season, Crowd Creation, where each week the internet offers feedback and I listen. I've even tweaked the title of the second season from Crowd Completion to Crowd Creation, because of the feedback from last week, episode 071, Wall Street Under Water.

I had planned to have new infrastructure ready for the start of season two - refreshing dog.movie, a presence on at least 5 new social media platforms, all movies from Season One Gentle Release moved to Vimeo... but on the last day of 2017, my dad decided to return to the non-physical, and as my family showed up for the funeral, one by one they we're taken out by a funky flu, myself included. Episode 071 arrived late, social media deployment was incomplete  and the email list neglected. In spite of these challenges, excellent feedback was had and so without further eloquence, here's the summary. 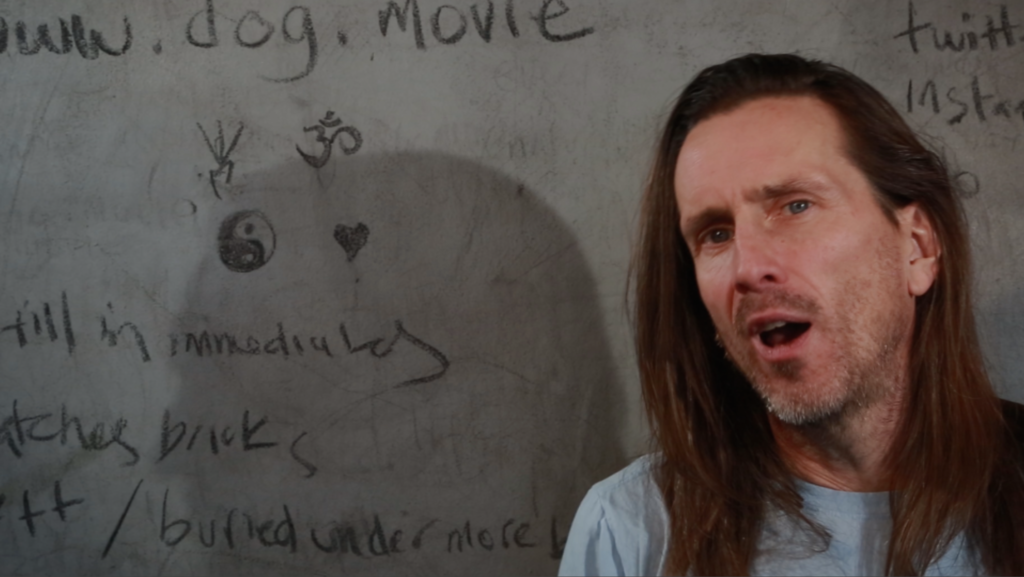 In the short shot Wall Street Under Water, gentle waves ripple over a submerged green street sign that reads, Wall Street. The sign is attached to a broken steel post, resting on a bed of red bricks. The question was, what emotions came up while watching?

There was feedback from James at dog.movie and Susan and Allison via Facebook.

Wow! My first thought was, “that looks like Wall St has been over taken by the ocean, totally believable.” It reminds me a little of the book New York 2140. I felt both amused and alarmed when I saw it—kind of like, this is scary stuff. Why aren’t more people concerned about what is happening to our planet? It is amazing how far a little clip can go and what it brings up.

Since "amused and alarmed" was roughly what I was reaching for, James' feedback was very satisfying. "Scary stuff" was also good. He had a complex emotional experience, which is a confirmation that this shot is well balanced between humor and horror, between subtle and shocking.

A crumbling facade of "wealth" and "power," being replaced by a new paradigm.

Now that's not precisely a description of emotion, but knowing Susan as I do, she's talking about a good feeling, uplift.

This was new territory. I didn't expect that Wall Street Under Water might be inspiring.

I immediately felt relief. As in, wouldn't it be nice if the "Wall Street" concept was gone. It could be a relic under the water, rendering "Wall Street" a myth, the likes of Atlantis. RIP, but forever in our view, so that we can know how much less stressful life is without the "Wall Street" ethos in our society.

For Allison too, the feeling was positive.

The entire shoreline is a jumble of bricks and broken stonework, implying destruction. Not just of buildings tho, but destruction of an oppressive, exploiting force, an abstraction - Wall Street, unbridled American capitalism. So the destruction isn't mournful or horrifying, but relief bringing, hopeful.

I hadn't intended that connection.

This is why feedback is so helpful. Confirming a shot works as expected, as in James experience is satisfying. Finding out a shot works in ways I didn't imagine, as in Susan and Allison's feedback is mind expanding.

Allison had a dream inspired by Wall Street Under Water that she's been writing about and expanding on which could evolve into a novel, Wading the Waters. 2300 words so far and counting! You can read the first wave of words as a comment on https://dog.movie/Daughter-of-Godcast-071.

Allison's story is a huge bonus. If the test screening of Daughter of God inspired lots of new projects - that would be a dream come true. Open source incarnate. So we're switching the title of season two from Completion to Creation. Since we're all doing this together, then test screening isn't just about one movie coming to an end, but potentially a constellation of new projects starting up.

In summary, last week's feedback shows Wall Street Under Water to be properly balanced, and unexpectedly, a flip of the standard apocalyptic paradigm, at least for folks with a vision for a more just and compassionate world.

The feedback system needs work though. Facebook stats show that hundreds of friends saw the Facebook post, but Vimeo stats record only 23 plays. Why didn't the other 20 people offer feedback? There was no negative feedback either, so asking for critique is important. I'm going to add instructions to this week's chunk to see if we can increase feedback. Which is what's up next, Date Dance.

In a post-apocalyptic world the refugee Christina has been convinced by her dead Uncle Joe that she's going to give birth to the Daughter of God, after she seduces Gerry, the awkward recluse. Christina is getting ready for her date with Gerry by dancing into and out of a variety of costumes.

The question is, based only on her clothing choices and style of movement, What 3-5 adjectives best describes Christina for you? Leave your feedback as a  comment wherever you're watching this video or send an email directly to the@dog.movie. Remember every opinion is helpful, there's no right or wrong answers. I'm looking forward to your feedback!

And that's this weeks episode, folks. Now be sure to watch Date Dance yourself and post comments. The Daughter of Godcast is steadily getting more fun, join us with your ideas.

This adventure of mutual movie making is brought to you in just under 10 minutes courtesy of myself Dan Kelly, aka Shri Fugi Spilt and the entire DOG family including both the living and the dead, the biologically thriving and immuno challenged, the dreamers and the woke, the liars and the evidence based, insiders and outliers, less me and way more you. We're off to a stumbling but thrilling start and I am so lucky to be right here, echoing my little word song off the pillars of the duality, just another sheet metal duck in the cosmic shooting gallery, where, according to that big bearded super generalist Randall Carlson, we could be slapped back into the stone age by a wandering mega condrite, at any moment. He's right I think. We're a planet of high stakes gamblers, dice tossers and card sharks. You thought Wall Street was nuts? Look to the skies!