Howdy and welcome to the Daughter of Godcast, Episode 067, Belief. A podcast about the longest little movie ever, the movie that made me, and coming up the collaborative completion in 2018. Meanwhile we're mopping up 2016, aswirl with hints, secrets and clues.

Here's a true story of 2016 converted to a parable, one might say shamelessly exploited, a duct tape and tin foil allegory, but we take the connections wherever we can find them. 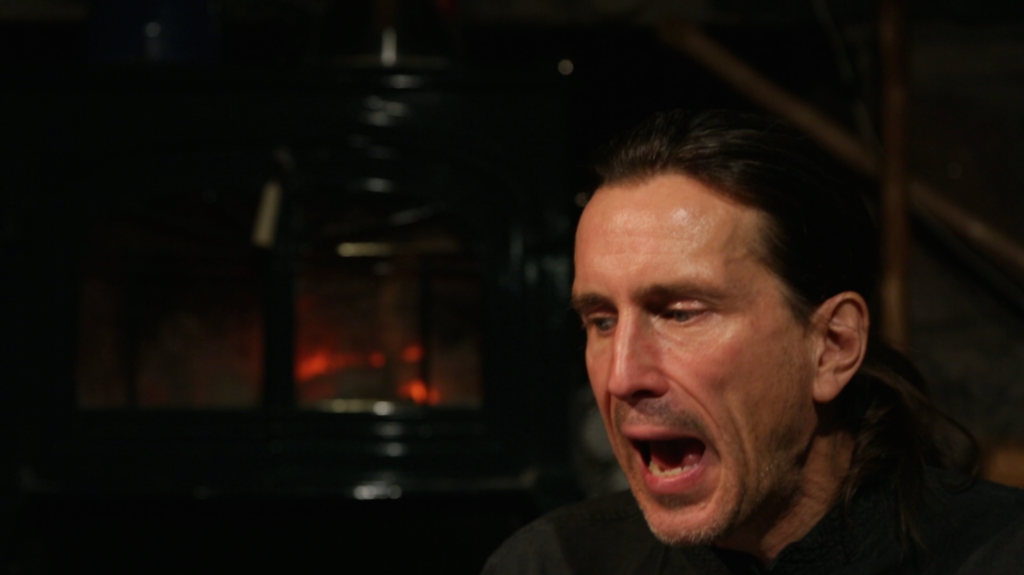 The Anchor and the Ice

At the end of the summer in 2015,  the day Ben left, we chained the big buoy and doom raft to the bottom of Crystal Lake with two massive anchors, 600 and 300 pounds respectively at 20 feet of depth. Summer turned to Fall and I eventually brought the raft in, but procrastinated on the buoy. Fall turned to Winter and a hard freeze locked the buoy into the ice. Bennie and I had walked out on the frozen lake and pretended to be Scully and Mulder investigating an alien space pod.

The Winter blew and blustered into 2016. The spring melt came in April and  as the big ice plates started breaking up, the wind rose and overnight the ice pack dragged the buoy and the two massive anchors a football field to the west. The power of nature. I converted my rowboat into an icebreaker and busted through the jumbled melting plates to unchain and recover the buoy. The primary anchor was nuzzled into a sand crater in the shallows, but still 6 feet below the surface. Two scuba expeditions were needed to winch and roll it all the back to my place, out of the shallows and back into the deeps. What did I learn?

I learned that sometimes interesting things happen when we procrastinate, not necessarily bad things. Embarrassing perhaps and with luck metaphorical. Deeper appreciation for the wild forces and how easily they can shift our ephemeral beliefs.

When Ben and I filled the 55 gallon steel drum with gravel, 8 bags of portland cement, and a gnarly steel core fabricated by Alex, we incarnated a belief system, an idea of massiveness, of immovability. Keeping a doom raft from drifting to shore on a storm tossed Crystal Lake, certainly. But pure trivia when grabbed by sheets of ice and a little wind. An anchor pretty much not even there at all.

Letting the buoy freeze into the ice was probably not simply laziness. This was my way of calling bullshit on beliefs generally, especially my own. Let the seasons change, the sun shine less directly on this little patch of Michigan, and my idea of massiveness is negated. A metaphorical demonstration, a critique of belief.

Why was I wanting a belief critique? Because beliefs can be tenacious, especially about myself, reinforced over 40+ years. Calcified thoughts that make life frustrating. Core assumptions about limitations and unworthiness, while at the same time knowing, feeling magic all around. Like to tear a man in twain.

Making the Daughter of God was akin to discovering the owners manual for the universe. There on page 53, I discovered a detailed description of my vastness, my unique quest and awesome powers. I'd been operating impoverished, a bag of beliefs masquerading as a man.

Now 2016, having the cosmic blueprints laid before me, the formula for practical magic plain as day, my beliefs were so much trivia. The magic was primary now, my human adventure. All beliefs were now up for evaluation, did they support the flow of magic or not?

If not, then gently and delightfully assert a belief that would. By swapping one belief for another as easily as changing t-shirts, is to be liberated from the tyranny of belief altogether.

So the morale of the Anchor and the Ice? Seeing this huge hunk of infrastructure that I overbuilt with my own hands hauled away as if it were nothing was, looking back, a huge relief. Cathartic. I could no longer be defined by beliefs. A few months later, I would launch this podcast and start the gentle release.

I had manufactured reality with perceptions skewing by belief, whether shitty or benevolent. Judging x to be true and y false. When I finally figured this out, I became the truth. Or take a short cut, fuck beliefs completely and just feel. We are beyond belief.

A few months into the podcast,  the American election heated up and a stark illustration of what happens when we put beliefs before presence. So many people were suffering because their beliefs about America and Democracy were never designed to anchor great sheets of ice during a spring thaw.  Somehow, hanging onto their beliefs was more important than feeling enlivened, at a time when feeling enlivened, competent and empowered was pretty crucial.

That November 2016, on the trainwreck that was Facebook, good friends forgot friendship and lashed out, loosing their minds. Nothing wrong with that either, just wasn't my cup of tea anymore. Also pretty obviously orchestrated, divide and conquer. America, sad.

Now, I'm not pushing life as pure presence, if being a collection of beliefs feels delicious. For whoever.

I'm almost standing on the soapbox, so I'll hop down. All I know is what I know for myself.

Though tenacious, my past beliefs were accidents, vagaries of interpretation. Now  I was getting deliberate, lining up with a deeper resonance beyond evaluation and judgement. My arc of disbelief over the next 12 months is described by the following journal excerpts.

02/16 process log
My experience is my responsibility, and tho I might not feel like I’ve got enough tools, I know it’s ultimately up to me and no one else.

02/22 process log
I can teach, now tho I want to fly, I want to soar and leave the tentative on the ground, I don’t want to convince the stubborn or coax the fearful.

03/10 process log
So who knows how many humans are out there being god in the privacy of their own remote cabins or walk up apartments.

04/12 process log
Our body is our first canvas, the most ready to conform to our patterns of thought.

04/13 process log
To sniff out joy, the habits of sadness abandon, the rituals of self loathing leave be, let me instead sniff the joy on the wind, in every breath. The signal of love, the broadcast from cosmic central, wake up, remember who you are. Lover, Saint, Warrior, Magician.

4/15 process log
Sterling Archer, "Everything always seems to work out of me."

04/29 process log
The world is a mirror of my own artistry, my offering, my radiance. I am an agent of the divine, the edge of creation. If I wish to be surrounded by beauty, it is I that beautifies.

05/04 process log
What if I were able to experience feeling in love all the time, without any external excuses, permissions, golden tickets, special circumstances?

05/17 process log
I like to weave these spells with words. I want to have other spell makers in my life. I love the idea of starting just where I am.

06/18 process log
I don't need anyone to understand who I am, that's not important - anymore. I don't love people because I understand them, it's the idea that we can understand {each other} that blocks feeling each others presence. what I like is a feeling of rapport, of connection. of resonance. of hilarity.

07/21 process log
As I ease back into the doing of DOG. Making lists, cleaning up lists, preparing drives to hold everything. The three big deals in my life are - physicality, DOG and feeling magnificent.

08/31 process log
Today is a special day! Today, August 31, 2016 begins the gentle release of Daughter of God, Dan Kelly's off and on focus for the last 11 years. Begins with the launch of the Daughter of Godcast podcast, Episode 001.

09/02 process log
We are experimenting with the nothing, with the empty, gods playing with being not god in the most brilliant theme park ever devised.

09/08 process log
To just be happy without any proof, credibility, fancy clothes, hot gf, without any means of support, to just be a celebration walking for no other reason but that I am hooked into the cosmos.
[snip]
So now, I want to experience ecstatic feelings for no reason at all. I want to be totally unconditional and just have a hilarious time being me. So here goes starting with... dishes!

10/04 process log
What I am doing here is activating super intelligence to finish this movie. that's fabulous and a hoot. I've gotta be epic to finish this thing, I've setup a situation where divinity is the solution to the conundrum, the koan is solved by being god, period. I am the daughter of god. Tee shirt!

10/12 process log
Speech is song, it's the song of the spirit, every word is important, significant. Why else do this but to radiate the strongest signal? Touch and inspire the world. If I had a way to reach thousands of people, to touch and connect with 100,000s of thousands of people, what would i do?

11/12 process log
Doesn't matter how many poeple are watching or listening. What matter is 1) Am I having fun and 2) Am I making something super cool? The rest will follow.

12/04
process log
the myth of the lone iconoclast, of the misunderstood genius, of the impossible dream. that doesn't have to be me, it's an interpretation based on limited experience and mythologies that have been seeded to isolate and disempower. that is not my story, i can tell whatever story i want to tell.

the story of the gregarious genius surrounded by empowered collaborators and synergistic mojo. of having adventures surely innundated by the best resources and perspectives

12/26
process log
Death is totally backwards, the translation out of here is hardly an ending, it's a tea in the greenroom, it's a chance to catch your breath before respawning into the level, death is our full selves, we can have here and now, through virtousic expression, athletic excellence, meditation, love of every flavor, connection with the wilds, just being in our fullness. it's like all of those except better, and then we can return to this experience and ride the ride again, because that's what god does. she he [we] flowers

You've been believing in the Daughter of Godcast, dedicating your precious attention to esoterica, ramblings and nonsense disguised as wisdom, epiphany and insight or maybe the other way around.  Episode 067, Belief. That last entry from the process log, where the hindu concept of reincarnation is a mere prequel to the first person shooter you're playing with your nephews and nieces, where you are happily gunned down by them only to resurrect and happily gun them down in return, 3d guts and gore splattered, but not a tear shed, no rancor, grief or sorrow. Is this a private fight or can anyone join in? Who made love to your wife or husband before you, were you being cheated on in advance? Are you on stage or in the audience? Is this a good time to go to the bathroom? Who are we?