Errgh. This is Episode 058 of the Daughter of Godcast, Thaw.

I guess there's not going to be a visit to the model shop this week, we're recovering from a field mouse apocalypse. Within the shack's security perimeter, between the keys and the reeds of the pump organ, I discovered two mummified tiny furry corpses. They died building advanced technology, thousands of tiny colorful threads interwoven, reminiscent of a neural network. Perhaps a spaceship or trans-dimensional gateway.  But before they could finish, they were made to unexist, perhaps by a human pathogen lethal to their race. I haven't performed autopsies but their construct is being examined in our labs by crack christian scientists. 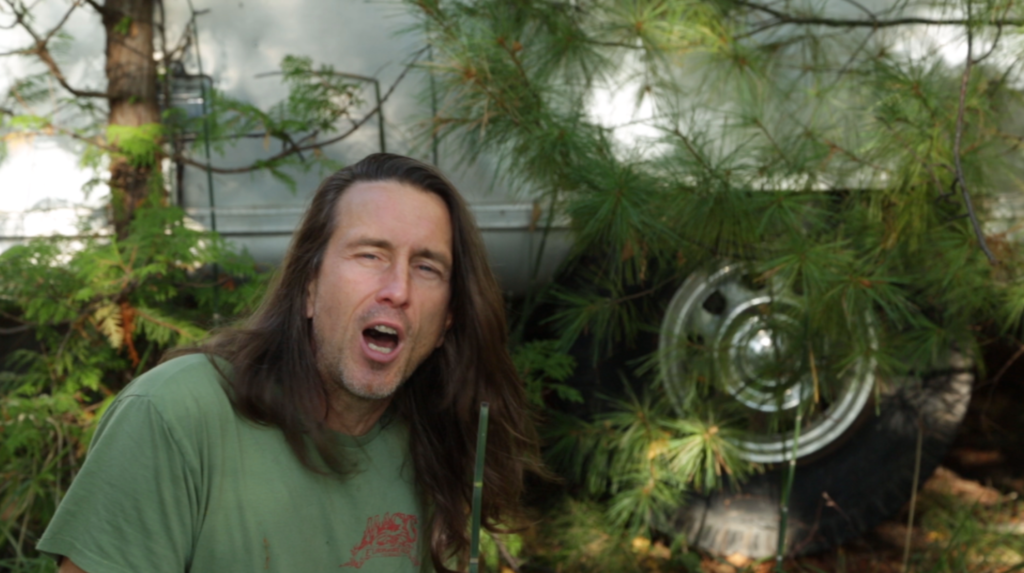 Back in the spring of 2014, I got cast in a zombie film, Thaw of the Dead. I played Russel, shepherd to a tiny tribe of starving survivors, trapped in a hydroelectric dam. Thaw was conceived as a short, but after additional shooting a year later, the project grew into a full on feature.

Director David Marek's previous feature, Somewhere West followed a tortured soul wandering hither and yon in scenic locations. Honestly, that's all I can remember, but right now I'm propped up in tall grass with crickets chirping and wind stirring the red pines, so activating a less idyllic space time locus isn't all that appealing. What I'm trying to say was that after seeing Somewhere West, I felt that David's best work was ahead of him.

AND I was not wrong. At the cast and crew screening of Thaw's near final cut in December of 2016, I found Thaw to pretty great in a culty sort of way. Since I aspire for Daughter of God to achieve cult status, that's a huge thumbs up from me.

David collaborated with cinematographer Matt Von Dayton, who I thought at first to be a mild mannered slightly geeky introvert, but that's just a clever disguise. He's actually a total kook, a freak, a mad genius. And a sexy motherfucker.

The unsinkable Cat Muncey produced the shit out of the project. Cat was an enthusiastic backer of TEAM DOG's recent swim for Grand Traverse Bay. She just plain rocks, full stop.

These three rallied Northern Michigan's most passionate aspirants to cinematic greatness. The Thaw project had commitment, a micro budget, momentum.

I was excited to be offered the part, I might have begged a little, still can't really remember.

Well, the Daughter of Godcast is proud to announce, the world premiere of Thaw of the Dead, this October 13 at the Royal Oak Starr Theater at 10:00 pm. Royal Oak is pretty much Detroit for you non Michiganders, and there are still tickets! Check out the page for the link.

The lead is played by Benjamin Busch from the Wire. So THAW even has a star.

I can't guarantee that the entire cast and crew will attend but short of a super volcano eruption, I will be there, ready to sign intimate parts of your body with a sharpy should you so desire.

The Dan Kelly / Shri Fugi Spilt / Daughter of God section are rows A and B, right down in front. The ticket widget is a little confusing, all the purple seats that are reserved are available for purchase. I've got B7 and B8, so if you are looking for a thrill, you can be right near me. Better than Sensurround and 3D, to have me dipping into your popcorn.

Yes the fabulous Dan Kelly aka Shri Fugi Spilt will be available for hobnobbing and selfies. Afterwards will wade together through a phalanx of paparazzi.

Thaw was entered in a slew of festivals and got into a few. Not as many as we hoped, and David is already looking towards VOD.

I'm a fairly fierce critic generally and the zombie genre is definitely not my favorite. As I've said tho I like Thaw, and not just because I have speaking part. OK, admittedly, I wanted to like it, but if I hadn't liked it you would never have heard about it on Daughter of Godcast unless accompanied by snide jokes.

So if Thaw was decent, then why wasn't there more interest from festivals? Maybe because there are so many indy films out there, and lots of them are decent and really really good and maybe even excellent. So good movies need to be more than just good, they need a following, a fan base. A jump start.

How does an audience discover a movie that isn't yet screening, won't start screening for another 2 months? Or in the case of Daughter of God when I started the Daughter of Godcast, 16 months?

You're listening to it. Yes, the Daughter of Godcast has since sprouted 10,000 new purposes, but we got started to invite the audience in. That was just over a year ago.

And we've since dipped our toes into various other audience inviting adventures, trial launching swag and exploring crowd funding with the Swim for Grand Traverse Bay. Plus a consistent presence on Facebook, Twitter, Instagram, Ello and LinkedIn has helped. All this has been fun and very inspiring, but there's a significant element of inviting that has yet to be implemented.

How do search engines like Google and Duck Duck Go find what folks are searching for? By sussing out whether the searchers needs were met. What?! How can a search engine know that? Have we gone beyond artificial intelligence and into the realm of artificial metaphysics, psychic search engines? What does that even mean?

You've been dipping your toes into the Daughter of Godcast, and in David Lynch style, we've opened up another mystery without closing the last one. Can search engines read your mind? Will we ever get into the model shop? What were those dead mice up to? Will the pump organ ever be restored to full operation?

All questions will eventually either be answered or forgotten, so s'all good. Do come back next week because whatever we're talking about, everything just keeps getting better and better. Guarantee.