Hello, my most excellent collaborators, friends, strangers, family. You are all of those. In my meandering way, I want to tell the story of the early 2016 epiphany about what I'd been up to with this movie, Daughter of God, all along. This is a kind of unified field theory of DOG visual effects, revealed over the next couple three episodes and which we'll continue to develop together as we start screening in 2018.  Coming up this week on the Daughter of Godcast, episode 056, Toys. 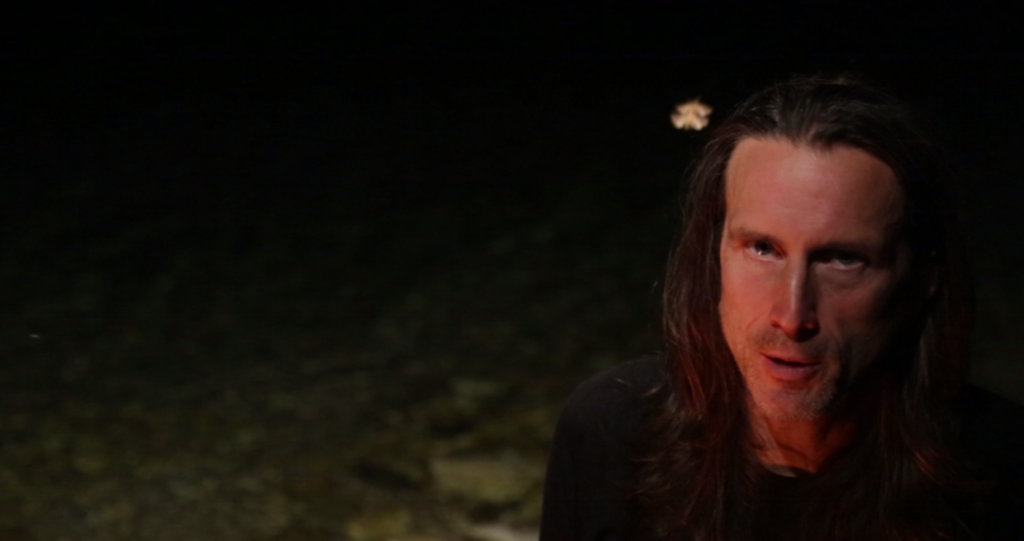 Before we get into the grist, a bit of house keeping.

We're preparing to screen in 2018, which starts with test screening, trying out images and scenes from the movie and getting feedback from all you all.

Here's my rough idea of how the podcast and the screen testing fit together. The podcast is primarily a conversation, arguably one sided, a flow of stories and increasingly contemporary reportage, and as such emphasizes the audio content. The excellent challenge is to somehow talk about what's behind what we see, describing the experience of seeing and of being in words, without relying on pictures.

The test screening of the movie will happen on a separate channel, perhaps many channels, wherever feedback is easy and immediate, and we can track views. This could just be Facebook and Twitter, but I plan on evaluating whether Vimeo's video review implementation is a good fit. Or I might come up with something of my own.

Test screening is going to be very interactive, and whatever we learn there will be subsequently summarized here on this podcast. So that's what the future looks like. Lots of testing, pondering the results together and then making adjustments. We're going to have so much fun!

In May of 2007, (episode 018) my nephew Jonathan completed a 3D cruise ship model, the first of DOG's megaprops. In 2008, (episode 021) he set to work on making cars for a abandoned highway scene. The tracking on the shaky live action was problematic, but we kept the scene in version .09 of the Trickster Pictures demo reel anyway, (episode 027). Jonathan resigned as DOG's 3D artist around 2013. He explained that making 3D models and getting them to render realistically were two very distinct disciplines, and his creative path didn't include becoming a render master.

If I wanted realistic megaprops, I either had to hire another 3D artist or come back up to speed on 3D rendering myself. Or was there a 3rd alternative? What about miniatures?

The prospect of taking a major chunk of VFX into the real world was suddenly very attractive. I had gotten pretty good at building plastic  model kits as a kid. I could revive and expand my model chops and perhaps even get some stop frame animation going too. I'd be using my hands, my whole body, power tools, delicate little tweezers and actual paint brushes. Screens would still be significant, but only for matching live action on set and final compositing. I could be manifesting mostly in RL.

The first major VFX scene fleshed out with miniatures would be the opening shot, an abandoned nuclear waste repository where we meet Uncle Joe for the first time. He's biding his time in a secret lair, surrounded by oddly persistent carnage from a long ago battle.

The opening begins with three shots, each moving closer to the battle scene and his hideout. A wide highway leads to a tree covered mountain with a concrete structure inset into the base. Moving in, we see the concrete frames a tunnel with giant vault doors blasted open. There are hints about what happened here, wreckage, signage, bodies. A fierce skirmish involving armor and infantry, with an inconclusive outcome, perhaps lethal to all involved. Rusted weapons, skeletons in tattered uniforms, charred tanks and humvees with mediatronics still flickering. Above the tunnel entrance are machine gun emplacements, M50 barrels poking out from behind sandbagged windows of the mountain bunker. The tunnel opening below is a blackness, leading deep into the mountain.

Then the black of the tunnel expands out and swallows the frame, fading into a surveillance shot of a young woman. She seems to be popping bubble wrap. A massive thumb appears over the woman and an interface, with icons and text. The thumb selects from a menu and the scene shifts to a scruffy dude dozing. There's a sperm count widget that accidentally gets activated when the dude appears, with a microscopic view of sperm wiggling, the giant thumb whisks that widget away. We pull back to see the surveillance image and interface are wrapped around a device, being held in a hand that is sticking out of the sleeve of a business suit. Cut to a far shot of a man looking down at a device, he's wearing a dark suit and fedora, Uncle Joe. In the background we see the machine gun emplacements in reverse, he is inside the mountain bunker.  He finishes and puts the device in his jacket pocket. Suddenly we are rushing up a dark tunnel towards the light, and Joe explodes out into the carnage outside the tunnel... riding a creaky bicycle. We see him from the vantage of the machine gun nests as he pedals away, swerving around the debris and bodies as best he can.

Way back in 2007, Patrick and I had filmed the live action at the PA turnpikes tunnel ventilation complex. In a high shot from inside,  we got Uncle Joe swerving his bicycle crazily away on the empty highway below. Was he swerving because he was drunk, having fun, or was there shit he was swerving around that would come later? I left my options open, but I really did want to have some shit there, horrific shit that could be a strong contrast to a snappily dressed fellow on a rusty bike.

I was pretty sure I wanted to turn the highway's tunnel location into something more epic, and a nuclear waste storage facility seemed to fit. Years back, I had followed the demise of Yucca mountain site, (1987-2011 RIP), a proposed underground vault for storing all the USA's spent nuclear fuel. There's lots of problems with consolidating nuclear waste, not the least of which is generating it in the first place.

Another issue would be the beefy security, and in my version of  repository a significant military presence had been established, perhaps after some catastrophe. I imagined fighting vehicles and the means to transport and maintain them, and troops.

In 2014 I started researching and acquiring detailed plastic models for this scene and all the megaprop scenes in DOG.

For the forgotten battle scene I bought a Abrams tank outfitted for urban warfare and a tank carrier, a Humvee and a Stryker NBCRV (Nuclear, Biological and Chemical Reconnaissance Vehicle). I found skeletons, weapons and action figure uniforms in 1/6 scale, which is GI Joe size.

The weird thing about model building and action figures nowadays is they aren't so much for kids anymore. The model building market seems targeted to adults. What kid of today would bother with plastic kits and dolls when they could be fully immersed in 1st person software simulations? Plus these kits are expensive. Kids from 1970s and 80s are more likely able to indulge their playfulness sans budget constraints.

I also stocked up on models to replace the other 3D megaprops, including several versions of cruise ships and the world's largest passenger Airliner, an Airbus A380.

Daughter of God is the most apocalyptic movie ever because of all the different apocalypses. Dinosaurs definitely stage a comeback, just like Godzilla and the Jurassic Park franchises. I wanted a still life of flipped cop cars near the carcass of a giant saurian, perhaps with a crushed police motorcycle in it's jaws.

I bought a 3 foot long T. Rex skeleton, a rare Japanese kit of a cop Harley configured for NYC and several diecast police Crown Victorias without markings, one in 1/24 scale by the company Motormax.

Actually, I really wanted my Honda XR-650 motorcycle to be clamped in the T. Rex's jaws! I even emptied the gas tank and laid the Honda down to get some still shots for testing.

The bigger diecast Crown Vic arrived at the end of 2015. After unpacking, I opened the driver's side front door and placed the model car on a sheet of flat black set paper with an open incandescent bulb above and to the left.  I took a couple of iPhone snaps. The images were stark and gritty, mundane. A surplus cop car sitting under a lamp post at dusk on some generic American street. I texted the picture to a few friends with the message, "got a deal on this at auction." Everyone assumed it was an actual cop car. Proof of concept successful, miniatures were easier than 3D.

I bought tons of different model kits, most in 1/24 scale or larger and reference books and vids on technique. Even if I didn't end up building all the kits for DOG, I'd have options for kit bashing, stealing components from one kit to add detail to another or to totally improvise, if an off the shelf model didn't exist.

Indeed, there are so many areas I can’t wait to explore as a cinematic artist, miniatures galore and so on. I know that completing DOG will provide more than enough fun and will lead to an avalanche of wondrous new experiments and adventures. So we look to what’s currently on bench. We’ll need a workshop. We’ll need precise tools including airbrush, compressor, paints an spray booth. First, we’ve got to assemble models since that seems to be what’s next, coming up soon. We’ve got to prep for model building, get everything assembled.

At the start of 2016 I was doing a lot of inner work, reminding myself what living fully might feel like, recording dreams and assessing what they reflected about my deliberate presence. I had been getting help with chain of title and financial catch-up from Kaitlin Matesich and Brianna Mathias. Daughter of God was becoming ever more vivid, I was catching on fire all over again.

You've been unboxing a T. Rex skeleton, a diecast car, a detailed styrene model kit, some assembly required, perception, participation. Episode 056 of the Daughter of Godcast, Toys. Your imagination is more powerful than the slickest console game. Together over the next couple of episodes, we'll find out how the vault doors got blown open. And the inky black of the tunnel, did something enter, or escape? Is a breached nuclear waste repository a smart place to hang your fedora? How valuable will bicycle repair skills prove to be after the end of oil, black gold, Texas Tea? Find out next week, same black time, same black channel.