A podcast about movie making and the science fiction featurette, Daughter of God, with Director Shri Fugi Spilt, (Dan Kelly). Daughter of Godcast, Episode 054, Next. Return to the Primary Narrative.

Roll on up and drop your kickstand, lean that gleaming paradigm you're straddling right over over and stretch those legs. This is the Daughter of Godcast Episode 054, Next. 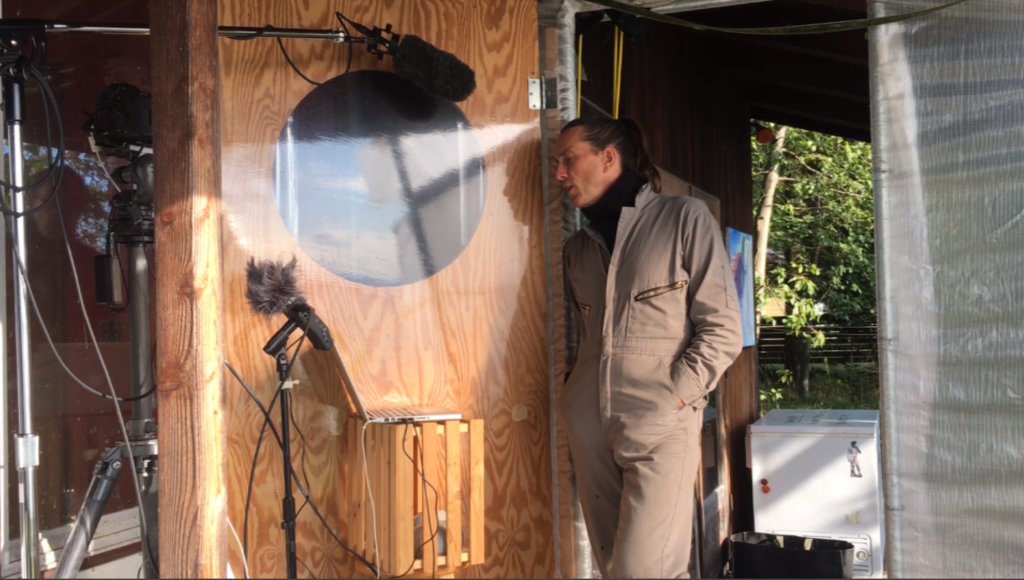 Return of the Primary Narrative

We've been jumping all around the last 8 episodes. Watersheds, Crowd Funding, Swimming, Ayowaska... Last week we enjoyed a visit with DOG's music producer Ndong Essinga, easing back into the primary narrative. Let's continue where we left off back in Episode 045, Park, as in Theme Park, sping / summer of 2015 right after converting girlfriends to motorcycles.

The end of romance and the beginning of true love. Much appreciation to her for reminding me of what I already knew.

During that summer of fun working with Ben and Bri on the doom raft, Rosie, Hobie Cats and cribs, I was inundated with unexpected inspiration about an idea I'd been thinking about since early 2011, maybe my next feature project... after Daughter of God and the third expedition of Around Lake Michigan. The working title for this next feature? The Science Fiction Musical.

With a decade plus project already active, how could I entertain the possibility of starting another? You might ask. I am pretending you might ask, so I can offer my snappy response. Is jumping around from one project to another inefficient, even irresponsible? Depends on what motivates the jumping.

Inspiration is peak experience, possibly the reason I exist. That and offering worthy women orgasms. I love sudden flashes of insight, creation flowing. I feel extra alive in the translation to words, painting, song or screen. The making of the Daughter of God has been nothing if not a delirious entertainment of such delicious epiphanies, raptly attended to.

The Science Fiction Musical is an amorphous emergence, a hodge podge of story snippets and rambunctious world building. There has been cross talk between Daughter of God and the Science Fiction Musical.  Here's a snippet of a monolog by Thomas Socks, once lead researcher aboard the exploration vessel Oceanea and consort to a dolphin princess, now recruited for a desperate cause.

Fair warning, this could be utterly incomprehensible. Just let this wash over you and see what happens.

Did any of that make sense? Sounded cool though.

Daughter of God imagines the gruesome finale of global consumer culture, that's why DOG is the MOST apocalyptic movie ever. In contrast, the Science Fiction Musical extrapolates what might happen if currently available paradigms and practices for thriving proliferated and prevailed.

Wim Hof has nudged the horizons of human physiology. Right this moment, folks are moring their health and presence with breathing and cold water immersion. Marshall Rosenberg rediscovered a language of compassion, NVC, which facilitates the essence of equitable and satisfying human interaction, rapport. Abraham Hicks continues to sketch a working map of the cosmos and provide pragmatic guidelines for true autonomy. Ayahausca is a transubstantiation of US, a ritualistic reminder of who we really are.

We've touched on these specific thrivings in previous episodes. In March of 2015 I did my first formal NVC training at the Neahtawanta Center in Traverse City. We discovered Wim Hof and Ayohuasca together in 2017. The Science Fiction Musical will be a huge mashup of these and many more thrivings, an exploration of our most excellent opportunities and potentials. Would there be challenges for the characters in the SFM universe? You bet, but nothing like the boring cliches coming out of contemporary consumer culture.

Hollywood keeps making the same movie, telling tedious stories of good and evil. What communal adventures would a conscious human presence undertake? What would we do, if we could do almost anything?

By immersing the audience in an enlivened culture, the SFM will demonstrate how bizarre and contrived current mainstream culture is, how alien to human nature. This immersion will require some turbo boosted exposition, and maybe that's why... a musical.

In October of 2015 after a sauna at Tim Burke and Barbie Stowe's, I outed my plans to write a musical. I asked if they knew a vocal coach and Barbie was super enthusiastic about Linda who had previously been in their band. Tim and I talked extensively about music and musicals.

I wasn't really thinking about the expository power of musicals when the SFM showed up in 2011, I just wanted to write a musical. As the SFM universe started to become an exploration of what a thriving culture might look like, I knew the audience would need help coming up to speed with such an exotic concept, and the musical aspect made even more sense. Amazing how the cosmos fits together!

Last week, in episode 053, Music Producer we had a conversation with Ndong Essinga, who produced the theme for DOG. The day before he went back to Brooklyn, he sounded a cautionary tone about my ambitions to write a musical. He was concerned I might be underestimating the scope of work. I told him I was building a roster of accomplished musicians to provide guidance, including Dede Alder and Josh Holcomb, Abby Alwin and maybe John Driscoll and Tim Burke. He argued I would need way more firepower than just a few virtousic players to pull off a musical.

That night we occupied the Airstream and I sang him some of eclectic covers I've been expanding my chord palette and vocal chops with, everything from 20s honkytonk, crooner tunes from the 40s and 50s, hippy love songs from the 60s and even 70's disco. Listening and jamming along, Ndong had some sort of epiphany, though I am still unclear precisely what that was. He seemed simultaneously sobered and intrigued by my choice of songs, like he learned something that surprised him, more compelling than my words earlier that afternoon. Though the Science Fiction Musical is very much on the back burner, his reaction to our Airstream session shifted the energy for me. I'm feeling confirmation.

By the fall of 2015 SFM inspirations were archived and I was groping for a comprehensive approach to Daughter of God's visual effects. Since we've jumped around so much in the last 8 or so episodes, here's a summary of progress on the DOG in the fall of 2015. We had an intermediary cut with extensive rotoscoping on the live action, even re-performances of the live action through a technique I developed, roto-welding, Episode 030. The VFX shots were mostly refined placeholders and detailed sketches. I had decided to switch from 3D to miniatures for mega props like planes, ships and such like.

I was poised on the edge of discovery...

You're poised for discovery with the Daughter of Godcast, Episode 054, Next. We're wrapping up 2015 and heading into the home stretch of DOG history, 2016. Just 1 year from the present. In episode 055, we'll have a peek at the delicious epiphany unifying the Daughter of God aesthetic. Until then, much love, welcome once again to year 2 of this podcast, the year of screenings, of rubber hitting roads, of more wild surprises. In this second year of the Daughter of Godcast, we'll switch from talking about history to the mostly right now, weekly reports shading from the gentle release to watching and feedbacking. Together dear audience, dear collaborators, we are going to give this crazy movie to the whole wide world.