Episode 043, Blessings. Ah remember... episode 042? There we were, cozily ensconsed in happy memories of 2014, wrapping up yet another year of heady innovation and insight when all the sudden, badda-bing! Back in the present - again. Or last week. Second half of June 2017. Now-ish

What's the point of my apologizing for Daughter of Godcast's temporal hoppiness? I'm not responsible for what happens here, as well you know. I'd like nothing more than to take full responsibility for the weekly jolt of genius that is the Daughter of Godcast, but the whole universe is implicated. You, me, dead people, dandelion greens, chick peas, the Pacific ocean. I'm just the messenger, the vehicle. All I do is flow. 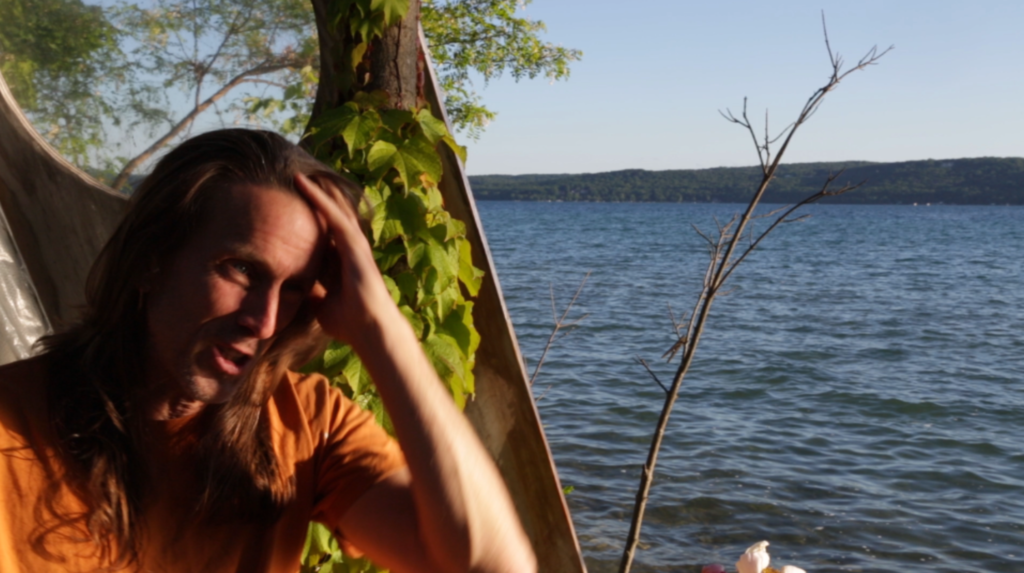 Plus, you're an adventurer. You love the rush of constant discovery while world building with a rigorous self consistent paradigm.  Mundane people just don't listen to the Daughter of Godcast! A fact incontrovertibly established by rigorous lab and field testing at several respected universities. By scientists.

Doctors preferred Luckys because they were toasted.

What was so important that we had to abruptly yank ourselves back from that wonderful year of 2014?

Stickers! We have stickers and they're free when you sign up to get email updates. This is not a bribe to get people on DOG's email list! Professional marketers are all about email lists. Meanwhile, I personally have been unsubscribing from email lists left and right. My email is already jammed, I'm sure yours is too. DOG's automated email list is just the easiest way to request shipping info from the faithful. You hit the list, confirm your email and DOG replies to find out where you want your stickers delivered. 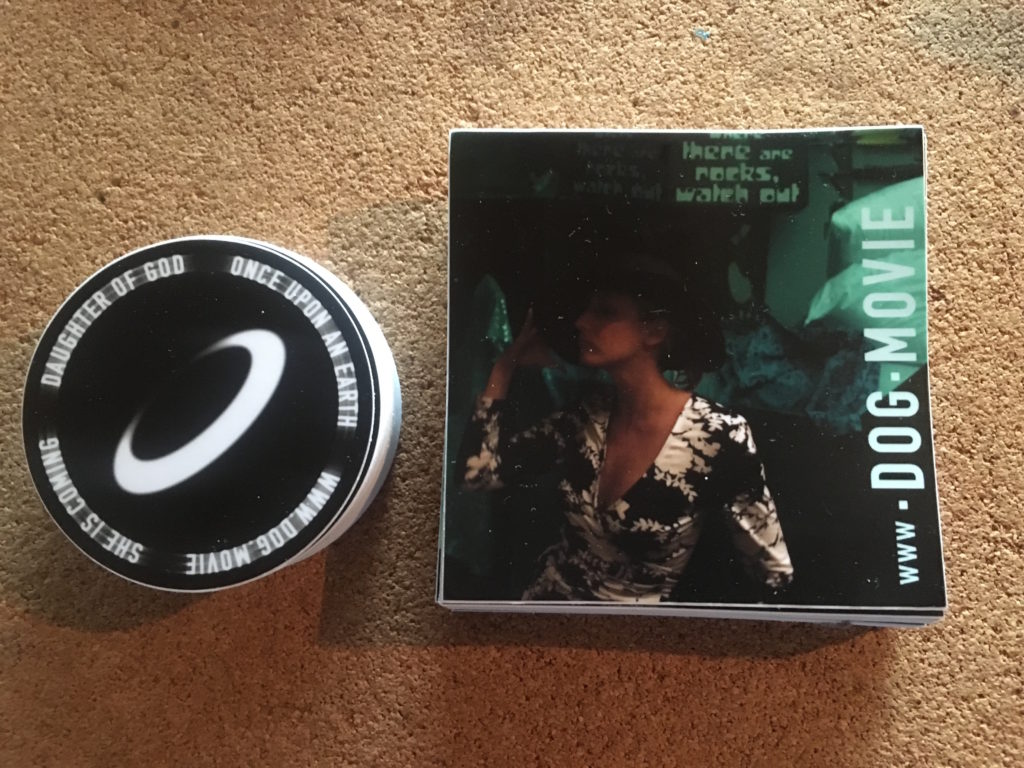 At long last, DOG's got swag, sacred swag. Merch - with a twist. Stickers are a miraculous transubstantiation of vinyl into blessings. As I've mentioned before, we don't need instrumentality to shape the cosmos, but instrumentality is fun. You don't need talismans to sparkle, but wands and magic crystal spheres are cool.

Swag, booty, loot. Gold peeled from the bas reliefs of captured palaces. A global dipping of toes in the swag waters, that's what's on today.

Previously, on the Daughter of Godcast.

So there was this little movie, a little movie with big dreams. There were these signals from a universe next door, an almost now, another earth a lot like ours with a George Clooney, crayons and volcanic calderas. Except some crazy badness went down there, a many armed Kali came to call and she blasted that earth with plagues and comet fragments and cloned saurians and not enough living wage jobs for the pleasantly placid undead, uplifted animals and slightly self aware machines, ouch.

Someone or something on this afflicted Gaia started broadcasting, between the edges of timelines where the grout had gotten loose. Those signals slipped through to us, to our space time scenario. Those were the Signals from a Nearby Now. Messages encrypted as poetry, almost like magic spells or oracular warnings. There's a sticker just for the Signals by the way.

Recently, they quit, no new signals for the last couple months. But the signals were just the latest leak. 11 years earlier give or take 6 months, a geek gets gobsmacked with a desire - to make movies. Finance, act, direct, push every frontier he's ever found. A script downloaded from the mystery in a Palm Springs hotel room.

Then all these circumstances and coincidences, epiphanies and auspiciousnesses. The script became a movie, fixing to be a borning at the dawn of 2018, the Chinese year of the DOG. Daughter of God.

This is all a little confusing. Is Daughter of God merely a movie? Or is an adjacent universe actually leaking poetry and cinema into ours? Could there really be a Daughter of God, showing up for all of us in a nick of time? Are podcasts and stickers the edge of her physicality? Is all this just topsy turvy promotion from that tree hugging wilds wizard, that self styled vanguard of creator culture, Dan Kelly aka Shri Fugi Spilt? And why the kooky Essene alias?

I can definitively answer that last one. There are 20k Dan Kelly's on IMDB, and my childhood friend Dave Cook and were given special names by the Goddess of Crystal Lake. Not sexy sacred underwear like the Mormons wear, unfortunately, just names. Maybe she who gave young Dave and Danny our names was the Daughter of God. As for the rest of the questions, I am not so sure. I can't take full responsibility, I don't have all the answers. As I said before, just flow.

I certainly want an audience for DOG, but I'm not sure I'd go about getting an audience quite the same if I were just one human acting alone. By flowing, I'm pushed and pulled along by the energy du jour, du minute, going where I might not have otherwise thought to go. Cause thinking is clunky and halt. Flowing is way easier than wracking my brain late at night and doing a fuck ton of staring at screens.

The gentle release. This podcast will be one year old in August, just two months away. That's was the beginning of the gentle release. Fast forward to 2018 and that's an 18 month release. Wow. About the gestation of a Javan Rhino. A little longer than a sperm whale at ~15 months. No where near the common frilled shark (Chlamydoselachus anguineus) at 3.5 years.

So now things are starting to heat up. Swag. Specifically, stickers.

DOG stickers, yes. They are free, if you're prepared to collaborate. Oops, here's the fine print. Full disclosure. We'll send you stickers and you'll send us pictures of your sticker deployment.  Encrypted texting with Signal and email via PGP is available. Why would you bother to encrypt? Because some of you might be putting those stickers somewhere wild. Somewhere unexpected. Somewhere poetic. Somewhere seditious.

Because this is the most apocalyptic movie EVER. Because just maybe, this movie is actually the electromagnetic nudge that helps our version of Earth to awaken, to edge back from all those chasms supposedly yawning before us. This little movie is the drunk girl we keep from driving, out in the club parking lot, we find her friends and they extract her keys, cooing, putting their arms over her shoulders and lead her into the powder room. This little movie inspires us to acts of kindness, to responsibility for each other and lo, everything works out. Maybe the Daughter of God is a wide wave. Maybe this movie, including podcast, stickers and whatever else shows up, maybe her wave is wide. Not maybe, for sure, she's rolling over the Earth in so many ways, as Wim Hof, as Jessica Lauren Graff, as the dark web... 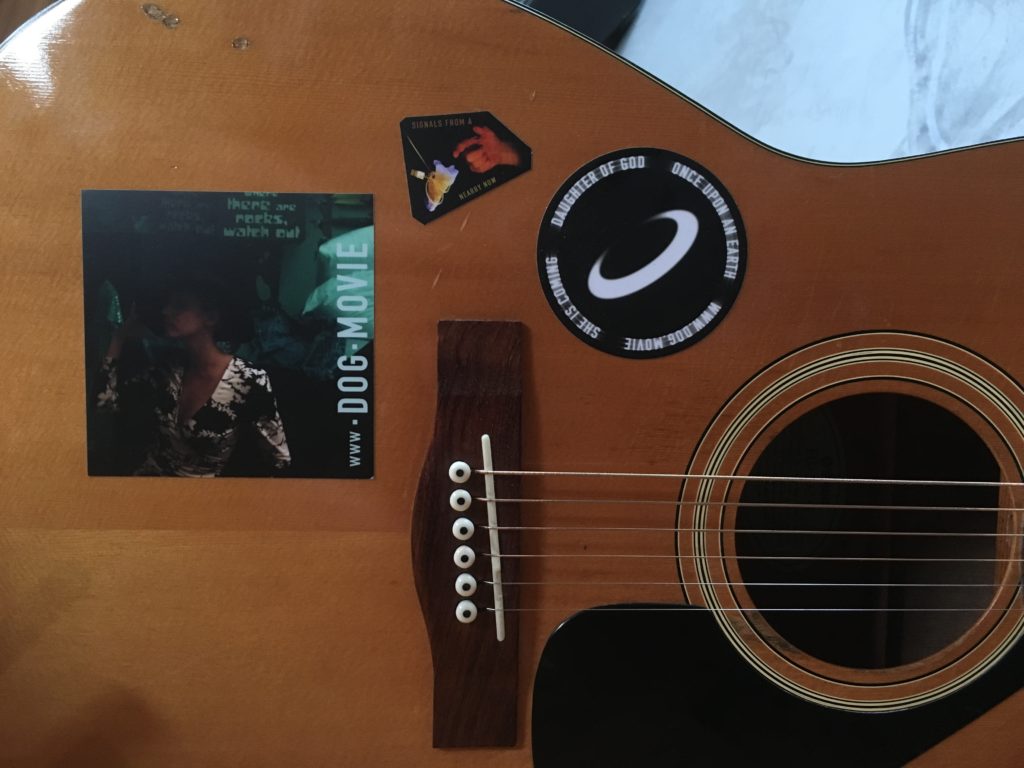 You don't need stickers for catching the wave, but stickers are bitchin! They are a painting wanting only canvas, a fresco waiting for fresh plaster, a reminder looking for memory, a miracle seeking the impossible. Have you got a bicycle, a car or kayak? Add a DOG sticker and instantly feel the blessings. We're not talking the Saint Jude Travel Club here, we're talking the Daughter of God. Way. Wherever you want to amplify creative, nurturing energy. Invoke the divine feminine, whistle up fierce protection and healing. That's where these stickers belong. 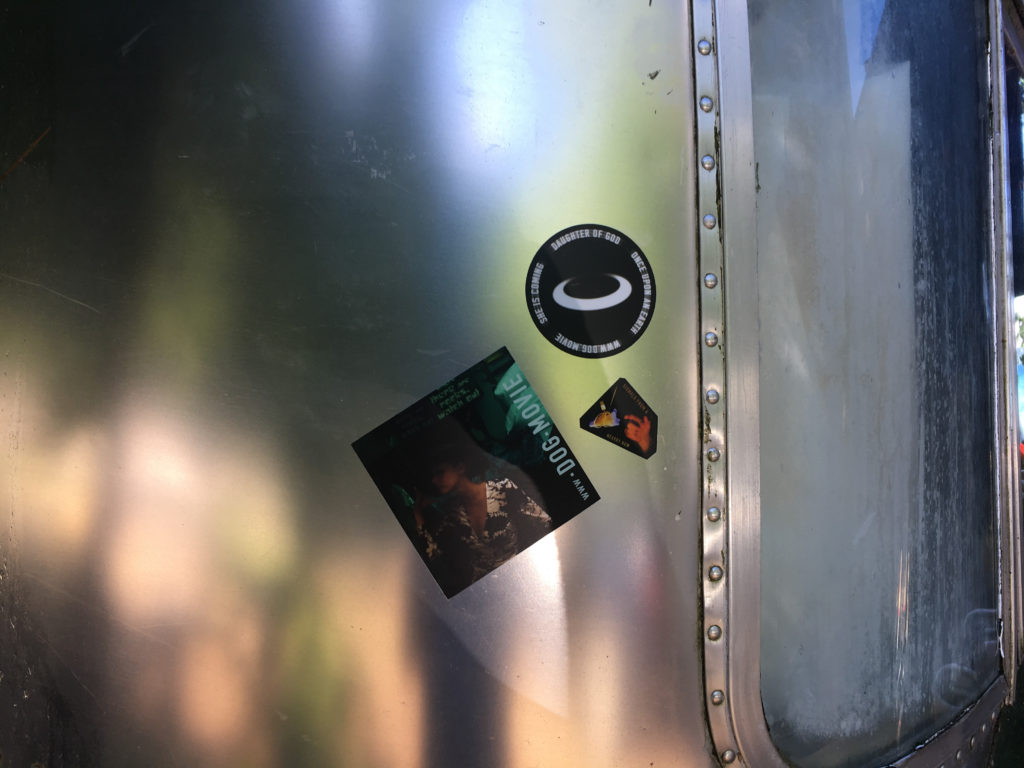 How about on the 9/11 commemorative plaque at the Pentagon? On the side of a Transportation Security Administration (TSA) full body scanner? On the wheel of a police Segway? My guess is these stickers naturally jam and neutralize jangled energies, by forming a quantum tunneling vortex for effortless and even unremarkable extropy. So you might be inspired to place these stickers in places that you don't necessarily have legal provenance over, even if you've paid your taxes. In that case, leave your smartphone behind, watch out of cameras and don't send pix to us via insecure channels. Hence Signal and PGP.

Trees and other living things are not appropriate for sticker deployment, btw. Stickers cost money but more importantly, they cost our fair planet precious resources. What started out as the blood of the black snake, petroleum, has become a vinyl auspice, a hint of her beauty, her radiance. Stickers breathe like the leaves of mint, oregano and lavender. Stickers are vibrational indicators, they are gas gauges indicating your tank is topped off with fresh and raw cacao birthday cake, telling us how very lucky we all are. How yummy things are getting.

Remember now, this is probably a pack of lies. A Story. Mythology is a special category of lies, because electrons aren't little cue balls. They tend to exist. So you can't talk about reality with musty old Newtonian language. To get what's going on, you've gotta be that finger pointing to the moon. You've gotta tell stories. Mythology is the best kind of lying.

Why now? If Daughter of God is hitting festivals in 2018, why stickers 8 months before? Let's take a little motorcycle ride.

As this episode launches, Daughter of God stickers and sticker dispensers are being deployed at community coffee shops, food coops and trading posts in Northern Montana, Traverse City and Ann Arbor Michigan, Brooklyn and Buffalo, New York and with luck, Eastern Europe. Operators are standing by, we want them in YOUR little corner of the planet. Check out dog.movie/bless for all the details. She is coming. 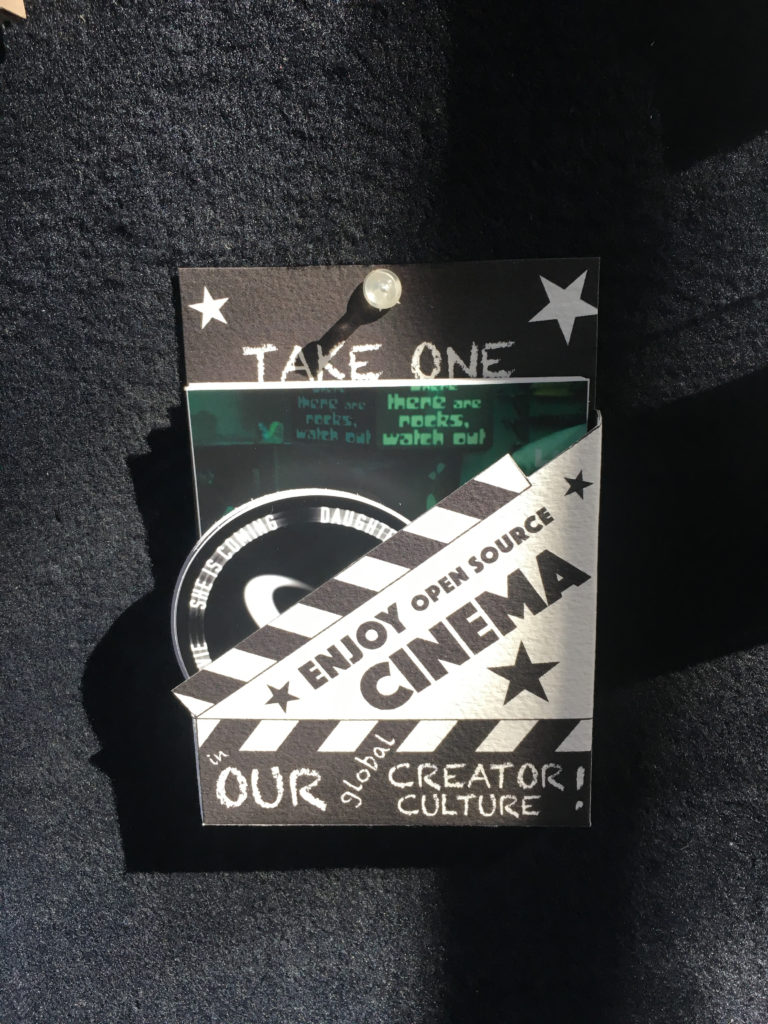 You've been listening to the Daughter of Godcast, episode 043, Blessings. This is synonymous with stickers, which are available right now. All you gotta do is ask. We'll almost surely be back in 2014 next week, but I'm not making any promises, I daresay they'll be a few sticker deployment pix to crow about for sure. That might be a promise.

We've got our top peeps working on this. Top peeps. Like you! You are our top peeps, did you know? Can you feel how crucial you are to the world you long for? You are the bliss you follow. That's the part Joe Campbell was a little cagey about. Just like he's the myth he was waiting for. We are what we desire. That's the exit strategy by the way, if you're wondering how this podcast ends. Film festivals, watch the movie, wear the t-shirt, yada yada. How about be have do, you?