A podcast about movie making and the scifi featurette, Daughter of God, with Director Shri Fugi Spilt, (Dan Kelly). Daughter of Godcast, Episode 037, Deep Archive. The seed from July 2013 sprouts.

Greetings fellow guests, travelers, spiraling through the galaxy on our luxuriously appointed conscious cruise ship, a celebration of sentience. Whether we root, swagger, lollop, hop, swivel, swim, flow, sit, stand, dance, sway, scamper, float, fly, dive or drift. Every flavor of being, human or otherwise, we're all in this together. 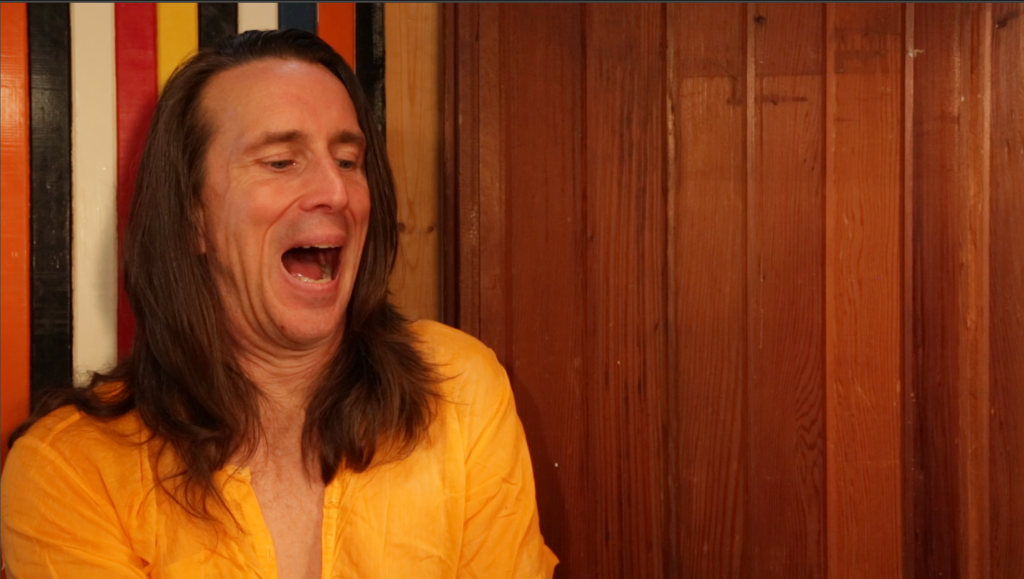 Here be the episodes of the Daughter of Godcast, our 12 year mission, to seek out and explore who we might wish to be, scooting our blankets around the blaze, away from wafts of stinging smoke, finding the optimal spot around the cosmic campfire, to share the songs, dazzled by star speak, structuring our vital fluids while staring into the crackling merry imaginings of infrared.

Perhaps, along the way, a movie, a podcast, an archive, an audience which is to say a tribe, freshly found, a play date with a couple thousand of your new best friends. Just another post science fiction, universe next door, romantic, cult featurette. Let the skeptics scoff and the cynics sin. Daughter of God is once again, the house, in.

037, isn't that a cool number? Totally prime, prime as prime can be. Indivisible, which calls to mind the pledge of allegiance. You remember, that rube goldberged extortion megabot shot through with corruption and exploits, wheezing and stumbling well into the early 21 Century, the United States of America? That bad old super power, the Disney democracy. Holy human, those heady days of frustration and fear, we certainly whipped up one hell of an energetic escrow back then. They made little kids recite a Pledge of Allegiance, talk about desperation. Like the Catholics confirming their faithful at 13, before they had any idea what they were getting into, before they even got laid.

One nation, under god, indivisible, with liberty and yada yada. You know the under god part was added in the 50s around the nadir of the McCarthy witch hunts? To differentiate Americuh from the godless commies. I might be playing a little fast and loose with the facts here, this is all coming from Wikipedia after all. 1954 tho, the same year Edward R Murrow did his little shaming spiel.

Do we always have to be under god? Can't we be on top of god, or maybe side by side, spooning with god every night, all dreamy and blissed out as I often was in the year 2014? I don't mind being on the bottom, but I don't think there's much sense in trying to coerce a specific intimate orientation, consenting adults and all that. And RATHER a risque topic for elementary school kids tho, I'm thinking. The flag as fetish. They grow up so fast.

The pledge of allegiance was a wonderful collage of uniquely American confusion. But then, existence is packed with fabulous contradictions, inspiring us to bloom, to push the envelope of the divine. We are the under gods.

Every country could have claimed to be the most conducive to confusion and contradiction, and therefor the most excellent for the flowering of human fullness, but what nation was more convoluted, schizophrenic, jacked up, disingenuous, occluded and downright scary as the once mighty United States of America? The wildest roller coaster in the park, back in the day. That's what made America great.

Well, we're not here just for jingoistic rants, or are we? What about that messed up, endless, over budget obsession, the Daughter of God? This making of the me, the making of we, every man jack of us. Every woman jill of us. Every non gender specific no name of us. The universal movie.

So here we are

Posted on December 6, 2013 by Dan from holyboners.com

That's the year 2013, receding in our rear view mirror. This post went on to explore the elements of a conventional economy and alternatives both emerging or extant. You can read the whole thing yourself right now if you're clever, or in a few months when all the core web deployments are unlocked, as the gentle release continues.

Speaking of web deployments, here's one last flash of 2013, which I hinted at in episode 036, the seed of this podcast.

How does one go about writing the history for a project that's been going on for 8-ish years? All the notes, emails, planning documents brought together, somehow. Searchable, like a database... but super easy to work with and eventually publish.

Up until the late 80s I kept paper sketchbooks and journals.  Then came computers and word processors. Inspiration Software is hybrid word processor, a robust implementation of outlining with collapsible sub headings, hypertext and a mind map mode, enabling concepts to be spread out visually. However, searching linked documents was cumbersome, as was adding media.

I launched my first website around 1991. Previous to 2007, I had been building websites from scratch with html, dogthemovie.com was my first wordpress install. I liked WordPress a lot, and deployed several WordPress sites after finding my current web provider Bluehost.

I have blogged about DOG since then, but development documents were kept on local hard drives.

What I needed for consolidating the vast Daughter of God development was something like WordPress (which is basically an elegant database implementation) that could live on my local hard drive, without requiring access to the net. I love the open source ethic and imagined making the archive public (with minor redactions to protect the innocent) after DOG was done. If only I could run WordPress on my laptop.

I could and I did when I successfully installed MAMP in 2014. MAMP sets up a local server environment that WordPress can run on.

Thus was the deep archive established and populated with most of the known DOGness. As of this episode the deep archive has over 400 posts with 225,000 words. That's maybe half of the 800 page Ultimate Hitchhikers Guide, which was five novels and a short story before being bundled.

Around 2012 Lena exposed me to David Allen's Getting Things Done protocol for capturing tasks. According to David, if we get the tasks we are trying to remember out of our brains and onto a respected list, whether paper based or electronic, our processing power is freed up and we get smarter. This totally resonated with the ideas of interaction design guru Don Norman, back from my game development days.

I got a profound demonstration once the deep archive was populated. A couple of weeks after consolidating all the development documents from the previous 8 years, I experienced wave after wave of new ideas, breakthroughs and epiphanies, which were duly added to the deep archive.

I was waiting for Richa to complete the roto for Christina's changing sequence, which would enable me to implement the mediatronic labels on the boxes in her cabin. I had text labels for the boxes identifying what they contained, and now I was ready to design their graphic labels and also the ads that they would display.

The first test of the deep archive was to find everything I had ever written about the boxes or mediatronics by simply searching. There were a few snafus which helped me to think more clearly about catagories and tags. Overall, success!

Don't forget I had fallen in love. Like a little bower bird, I was making my house a more appealing nest, by  finishing some exposed wiring and preparing to close a wall in the studio space. During the renovations, I liked listening to documentaries. I had rediscovered the fabulous historian Michael Wood, and found his series, In the Footsteps of Alexander the Great. Alexander was a dude who pwned the most powerful empire of his time, was called a god by the Egyptian were the leading edge god experts back then and he lead his little army to the end of the world. Then they turned back and that was that. I wondered what might have happened had Alexander not turned back. Here's a little speech I wrote for him.

Alexander’s speech at the end of the world

2014 was an intense and clarifying campaign of my very own. I was still leaking energy away from my top priority, DOG as I had in previous years, progress was not optimal. Michigan Movie Makers continued to feel relevant, I initiated a weekly partner dance group, home improvements were ongoing and I was keeping an eye on my mischievous parents.

New in 2014, I keenly felt these energy expenditures, the diversion. I wasn't distracting myself, trying to escape working on DOG, I was diverted, putting my energy into a lower priority outcomes while yearning to get back to DOG.

My brother's family didn't approve of my romance and residual tensions from prior conflict were renewed and amped up. Get togethers became an ordeal that I eventually skipped altogether. I was also in a lot of straight up pain from intense bursitis, having injured my elbow doing a dive roll over a pasture fence. Months went by before I found the permanent fix.

And I was going through serious changes with my lover. She was a delight, a revelation, we found new vistas of pleasure and rapport together, emotional terrain I'd never known. Passion and misunderstanding combined to push us way beyond who we had been, negating familiar patterns and strategies. Like riding water mountains and wild winds on the big lake, sans the virtuosity. Though I did my best, I was wrecked and wrecked again. Entries in my personal journal stand in stark contrast to DOG's exhilarating deep archive posts. When not singing my heart was chafing and breaking.

In 2014 I activated more desire than ever before.

Every one of us miraculous. We are each a deep archive of knowledge, of wealth, of rapture. Whatever we're looking for is searchable, available. How many of us are willing to even ask? I woke up this morning with this thought. I am only opening up to what I am, what the whole world has hinted at, what has been right in front of me, hidden in plain sight. There are guides of every stripe, humans both croaked and breathing, kissed and never met, entities invisible like breezes that speak in the voice of rustling leaves or bright as our local star, singing a chorus of warmth on skin, in light language. We are all standing in a shower of the best answers ever. Who will ask?

You've consolidated the secrets at the end of the world with the Daughter of Godcast, episode 037, Deep Archive. Each week, spoken words and flickering shapes, a rambling on and shambling about which is somehow musical, warmth and light, laughter, even liberation!

Meanwhile, on iTunes. After 36 episodes, Daughter of Godcast is still not ranking on iTunes. Even if you're not listening on iTunes, please go set up an iTunes account and let the world know you love this podcast. Or at least like it enough to still be here after 037 weeks. Friendship alone cannot explain your persistence, just come out of the closet and admit there's something halfway fun about this podcast, about following the adventures of Shri Fugi Spilt aka Dan Kelly, your totally himself host. Alright, so that's your homework. Pretty please? Go to iTunes and top rate this podcast or even better top rate and offer glowing praise. Enthusiastic recommendations and over the top testimonials. Lie if you have to. I do every week. Lies lies lies. It's called storytelling. iTunes!