A podcast about movie making and the scifi featurette, Daughter of God, with Director Shri Fugi Spilt, (Dan Kelly). Daughter of God, Episode 035, Pizza. The title is not even forwshadowing this time. Encryption? Chaff to confuse you know what.

Welcome my friends, both met and yet, lovers long ago and to to be, my Earth spanning family and even extra terrestrial, last and future, now and when. We are together a weekly rambling, a vital message, a pointless harangue, the most important words ever shared. Once again, you are Daughter of Godcasting with Dan Kelly, Shri Fugi Spilt, just another carbon based humanoid love bunny, a freaking miracle on the hoof, the truth and the light, mostly water and a six pack of smiles. 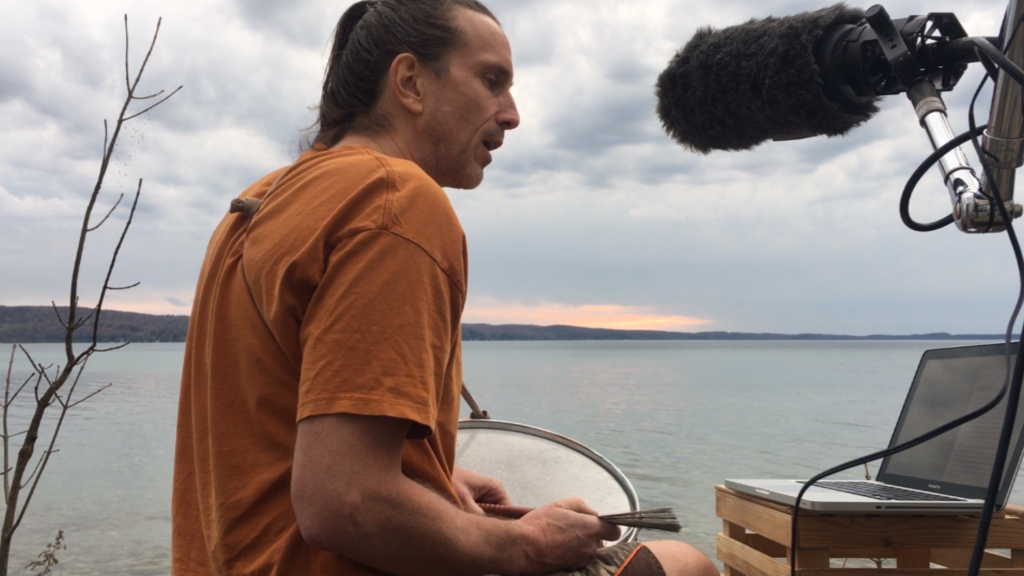 Yesterday while incarnating wilderness on my back steps, staring into the sun's twin on the languid lake, I felt I could keep my eyes open indefinitely. I stared at the sun a lot as a kid, watching the white wheel unscrewing from the sky, round and round forever. Is staring at the sun bad? Not according to some Tai Chi masters. Anyway, yesterday. I blinked fast into the burning, intense reflection, tripped out a little and discovered beautiful confusion. A sweet shorthand for the being alive ride.

How often do I know what's going on, what I am doing? Beautiful confusion is a liberating and at the same time scary perspective. Allowing myself to let go of the illusion of order, of having a plan, of making sense. Embracing synesthesia. Realizing the structure I impose isn't really all that helpful, that meaning is an overlay. Could I just be more easy with the raw vortex?

In episode 034, the Michigan Movie Makers were a freaking fireworks display of beautiful confusion. I projected as a professional, as if I knew what I was doing, inspiring the community to confidence about shared objectives, yada yada. Bluster and busyness.

If you read the archival M3 posts from 2013, you might be kinda impressed. I was! Trying to prove... something, establish credibility, be appreciated, or maybe just casually trotting out my myriad super powers for fun. Revving the engine while waiting for the light to change.

If you must know, the bluster and brouhaha of M3 was an elaborate diversion, carried out by my holographic AI simulcra, freeing the actual flesh and blood me to foster liberation unfettered by agents of the state.

2013 in the Daughter of God labs and weird magics where sputtering and flaring up. Around April, the mediatronic relief boxes scattered through the big boat became sustainable civilization restart kits. Content categories and labels were developed.

After applying a creamy purple color correction to a few roto-ed scenes, I wrote on May 22 that the results were "eerie and super fine." I wondered if I should just have Richa and Eshan roto ALL the interior scenes.

In August, autonomous surveillance spiders were added to the DOG universe, in support of Uncle Joe's apparent omniscience. Also, I was playing with a scramble suit for Joe, borrowing from PKD's a Scanner Darkly.

I pondered an unexplored cinematic language, revisited animation ideas and outlined what an Artist house open studio event might feel like. I wrote several odd little vignettes and short stories, Dada humor or the 'walks into a bar' sprinkled through this episode. Along with "Emmissaries from the Stars" from episode 034, I wrote a story about eating cloned celebrities, "Clooney Burgers", how to author a holy book, a practical guide to powering starships with orgasms, "Registration Card", a short story about registering consumer products smarter than we are, several explorations for the science fiction musical and even a feature porn script!

Here's a few selections falling into the Why movie category.

the movie i want to watch

This next post discusses the character Gerry from DOG who has set about to upload himself into the Extra, which could be conceived as a feral internet of things running on the atomic level. After the internet escaped,  most physical stuff, including rubble, derelict cars, vegetation, insects and even the air now supports an overlay of uncharted virtuality.

To conclude episode 035, I offer either encrypted intelligence for the clandestine network of utopian conspirators, or possibly just a collection of cognitive rags stitched together. I'll be speaking with my usual compelling voice to make this sound cool, regardless. We all have an influence, whether we write a bestseller, raise kids or roll burritos. Some accomplishments are associated with our earth aliases. Pyramids, bestsellers and kids often carry our names forward even beyond our death. Just a whiff of immortality, at least until personas can be fully reconstituted from the midden heap of our skin flakes, grocery receipts, love letters, selfies and tax returns. Another riff on Ray K.

My intuition tells me that striving to leave a legacy is a cart before the horse deal, if our contribution is significant, then perhaps our name will persist. If we raise thriving, secure kids then our name might be esteemed. If we raise a serial killer we're remembered as the shitty parents responsible for a serial killer.

Setting out to make a popular, festival winning movie would be a weird goal. Setting out to make a movie that was exciting and compelling to me, that's doable. Likewise with this podcast. I started podcasting to expand the audience for the Daughter of God. A fantastic and helpful mistake to make right off the bat. Inherently limiting, the wrong question. How do I make a popular podcast? Copy other podcast formats, imitate other hosts, do what's been done before? Boring!

While I was sailing in 2009-2010, I tinkered with how to translate my wilderness experience to the camera. That's a little more than pointing at sun dappled forests or pinkish quartz dunes during magic hour. Who I am in wilderness. Writing, rambling monologs while eating oatmeal in the dinosaur grass, or steering Hello World with my feet.

That's still my desire as we finish our visit today. To be wilderness incarnate.

This could be a prayer, try it with me. Now I recognize myself in this sun and water. I remember that I am the wilderness, I am the beauty I seek to surround myself with, the exotic places I long to travel to. And when I speak, you might as well be hearing loons or the lapping rollers falling apart over the pebbles and sand.

My words mean nothing, just listen, listen and share the sun on my skin, be the sky with me, the tree budding. Remember you too are the wilderness. Take a vacation from thought.

I suggested to Joe Cissel the other day that TV shows and podcasts are about people first and information or plot second.

Reading a story by a crackling fire, I hear words in my head, soft spoken by some version of me, the voice of the author whispers. Shows and podcasts come complete with their own voices and faces, we think we are engaged by the stories or the information, but we are really bonding to the carriers of the information, the people.

This was confirmed by feedback from Amanda, a social media maven about THIS podcast.

"... but yes I do think there could be misinterpretation in them. I think you can reduce the chances of that by excluding transcriptions. At least then you're not repeating controversial/explicit content. Reading it leaves an entirely different resonance than listening to it via your tone, which you are able to get away with much more."

Exactly the same information, written first then spoken second, both translations dislocated in time. Yet the spoken information achieves rapport whereas the written threatens censure. We are the message.

Do we need an echo to know that we're alive? Is this writing, this podcasting helping me to have a deeper life experience? Seems so. When the Bluehost servers in Utah are recycled into Tricorders and Xwings, this podcast may be long lost, until then I am as substantial as the Pyramids at Giza. I am solid and real, I am the megalith of the moment.

You've become one with Episode 035 of the Daughter of Godcast, another 20ish minutes of the very same nothing that gave birth to all the cosmos. Words alone made a virgin pregnant. What can they do for you?

Gurudeva, an incarnation of Shiva, established a Hindu temple on Kaua'i. He advised his devotees to write 10 pages for every year of thier life, a crucial step towards liberation. I've always wanted to do this and started many times - with the story of remembering JFK's assassination when I was only 6 months old.

Now with 35 episodes of podcasting, I've made some significant progress towards completing my 530 pages. Maybe 53 hours of podcasting would count. Liberation as motive? I might already be enlightened, and like all awesome bodhisattvas, staying behind to help you. Or maybe just because I have yet to find the ultimate vegetarian pizza.

Two things I forgot to talk about in this episode. The first hint of Daughter of Godcast and Dan Novak's sing-a-long from my birthday party. Plus I'd like to add imagery for the cool DOG developments discussed above.