01-06-19 Archival text in this transcript doesn't display correctly. Our crack team of web adepts will eventually get around to fixing this. Thanks in advance for your patience and in the meantime, the podcast and video are complete and ready to roll.

Welcome to the Daughter of Godcast Episode 032, Waves. Last week my life energy was shunted to an immune response, so episode 031 was a slurpy, sniffling mess, and very late. If you survived listening last week, I'm happy to report that I'm now back and firing on almost all cylinders, game to deliver a coherent and distilled episode, or a fair simulation of one.

I must have watched Transcendant Man on or before July 17, 2012 the day I wrote to Ray Kurzweil, asking if he had any open source tools for reconstructing his dad, and wishing him a safe arrival at the Singularity.

With this podcast, I am archiving enough of me to reconstruct a reasonably accurate facsimile of Dan Kelly aka Shri Fugi Spilt, if not THE me. So when Ray does eventually release his open source persona resurrection tool kit, these episodes could be the raw material for your very own version of myself. Oh, what I do for you people.

The Daughter of Godcast podcast is available as an audio/video version and an audio only version. The audio only version should be all you need, at least that's my quest. So I occasionally have to be a bit virtousic at translating images into words. Especially when expounding on the joys of visuality. We're hacking that old adage, a picture is worth 1000 words. These episodes are usually around 4000+ words, but you're definitely seeing more than 4 measly mental pictures...

In episode 030 I tediously explained the mechanics of rotoscoping, totally neglecting the second rule of sales... talk benefits not features. Who cares about what rotoscoping IS? Tell us why is it cool?! This podcast is expertly crafted to reach an audience that actually knows how to live, geeky obsessions notwithstanding. I imagine my audience sipping home brew gruit while reclining in bippling hot springs, walking their unusually intelligent tabby cats on shadow dappled byways, or reading Alexander Weinstein by the glow of a beeswax candles. Living Large.

Side by side the two plucky visual effects artists plied their ephemeral trade. Just past their flat screens, a laughing lake, either placid and ripple-free, or methodically waving against a rocky beach under cloud scudded or burning blue sky. The excellence of summer in Northern Michigan, making a movie. That was Ben and I until September 2012, before he returned to Western Michigan University to continue his debt accumulation, a chronic symptom of higher education in the alleged REAL WORLD.

So why is rotoscoping cool? Why drudge away for hours days tracing live action?

When Christina opens the cabin door for Uncle Joe, he seems to be gently shimmering with red light, he's a sunset, lurid and fascinating. His noir suit and fedora, his near incestuous leer, are juxtaposed by the sacred / profane radiance of capishe. The hallway is red too, lit by red bulbs... yet this light upon his body dances, celebrates. Perhaps he helps us see the living energy of light for the first time. Or is this just her POV, are Christina's eyes brimming, is she seeing through tears? The beloved and enigmatic Uncle, back from the spooky nethers, is haloed with her intense emotion. 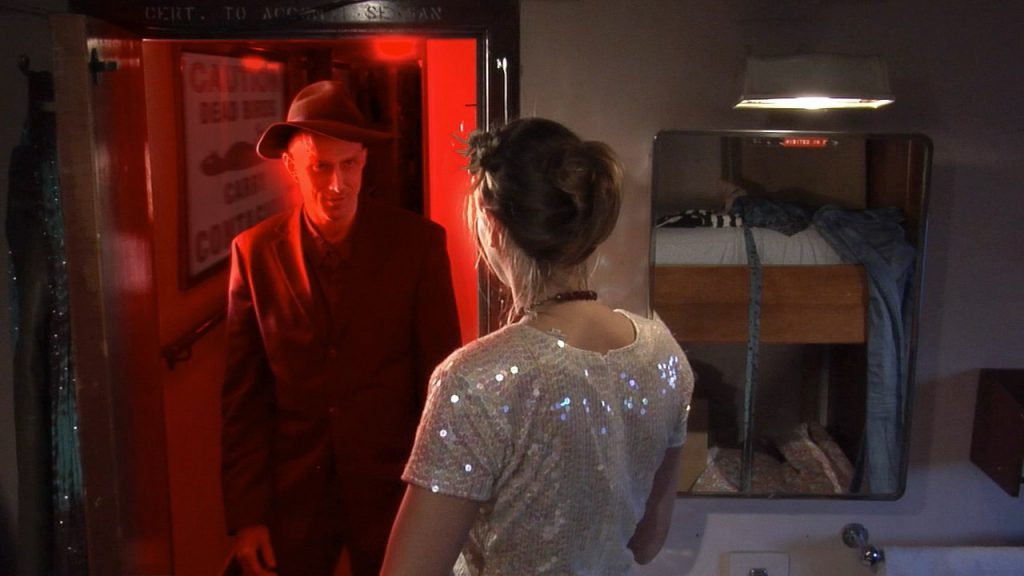 That description was 105 words, 1/10 of a 1000. Not an inadequate audio homage to the rotoscope enabled image. Because the root of all art is feeling.

Joe's back from the dead hallway shimmer is subtle, the audience is not necessarily even going to register this as a visual effect, I am only helping them see what they want to see, goosed up a tad.

As you May Know

Posted on September 1, 2012 by Dan from holyboners.com

When I play at being thought free, I arrive in an inexplicable state. Words can't touch where I am, and what I thought to be my life, turns out to be a map. Being is way wider than what we think, write or speak.

Which is why I am never trying to say anything here, make sense or tell the truth on the Daughter of Godcast. Because the noise my words make is more then mere meaning.

Have a nice day…

Posted on September 27, 2012 by Dan from holyboners.com

All you need is a Question Mark

On September 25 I acquired spiritual stewardship of the Wonderland sign from Jon Wagman himself, via email. Mutterings from the locals about the derelict Question Mark building being sold or demolished. Clearly, the sign should be snatched, historic preservation, echos of a bygone age.

Wonderland was an environmentally oriented art gallery launched by Wagman in the early 90s, coinciding with an improbable influx of artists into little Benzie County.  The gallery's sign was a just a giant jagged question mark with the planet earth as the dot, 12' high by 8' wide.

Jon stole the color scheme from a swatch of retro fabric he liked. His buddy Mark Whiting (later of Iron Giant fame and Finding Nemo) had executed Wagman's design with matched house paint.

As soon as the gallery started making a little headway, the landlord raised the rent. Frustrated, Jon gave up and hit the road. The cantankerous landlord removed the lower panel of the Wonderland sign, the panel of the earth, leaving only the swirling curlicue above and  the rough 2 x 4 armature below, his revenge on the town of Honor for real or imagined slights. The building and remains of the sign were an iconic feature of Honor, Michigan for a decade, their story and significance eventually forgotten. 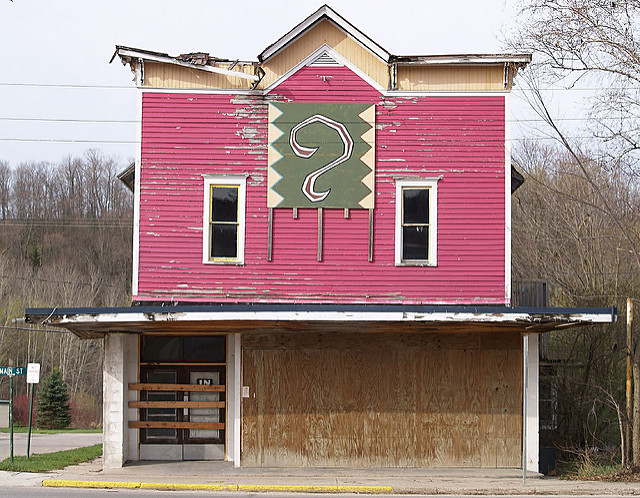 I had been given stewardship over the energetic essence of the sign, the soul of Wonderland, but how to nab the physical incarnation? In plain sight or in the dark of night? And where was the third panel, the Earth?

Through the summer and fall Fukishima was often on my radar. As a two year veteran of wild open water, I was an interested party. I was feeling personally responsible for the vitality of my big fresh water lake, flanked as she was by dozens of Fukishima-esque blunders in the making. I had sailed by several nuke plants. The abrupt end of Around Lake Michigan's second expedition was presided over by brooding relic of atomic misogyny. Were they alive and sentient? Ancient malevolent dragons sleeping.

I was making a post apocalyptic movie at front of the 21 century, while entertaining the possibilities for preventing, fluidly side stepping or remediating the apparent apocalypse in progress. Two projects, one aim.

Fukushima in the USA

Posted on August 6, 2012 by Dan from holyboners.com

Posted on September 4, 2012 by Dan from holyboners.com

Wisdom laps upon my consciousness, little waves curling in and then receding. I knew things and then forgot, knew and then forgot, each time the knowing lasting a little longer. I had learned that the super power of generosity if paired with consciousness could yield boons. Otherwise, nightmares. I had learned that I could give myself permission to feel love, happiness and exhilaration anytime, anywhere, not just after achievement or when conditions cooperated.

Way back in the 90s I had played in the waves of Shakti Gawain's creative visualization, manifesting misplaced car key and wallets more times than I care to mention.  But not always. Here's two 2012 excerpts illustrating a wave rolling in and out again.

Posted on September 24, 2012 by Dan from holyboners.com

September 5's Visualization is Not About the Future reveals the moment as the font of creation in contrast to goal setting, planning and effort. That wave had washed over me before and would again until eventually, I am as you hear and see me now, wonderfully wet and slippery.

In Projects In Progress Chapter 2, I was heavy into goal setting, planning and effort. Still damp from the wave a few weeks earlier, but drying off, becoming future focused, action oriented.

The waves wash up, splash us a bit and then fall back. Again.

What I want to be when I grow up…

Posted on October 7, 2012 by Dan from holyboners.com

Check out these svelte goals from 2012 for the future, I didn't even need to snip anything. Trusting that everything's in the emotional escrow, and only trotting out the shiniest baubles. We were learning, getting the hang of this reality thing.

Posted on October 9, 2012 by Dan from holyboners.com

The later half of 2012 was a waking up... and up. Blog posts splitting along the seams and light pouring out.

Posted on November 2, 2012 by Dan from holyboners.com

After frittering around with and dismissing a platoon of alleged roto artists, integrity showed up. In October, Richa and Veshan started bidding on jobs and cranking out results. They became the staple of my roto team. Remember Cody from Episode 28? Around about December, he entered the scene, my last intern from the Career Tech Center's Film and New Media program. With productive artists to supervise, I was now a VFX supervisor, for real. My name on the credits, yet again? Time for another pseudonym. Stephan Ganesh, VFX supervisor to the stars. The Hindu god Ganesh is traditionally the overcomer of obstacles and was given responsibility for information technology in the last couple of decades. Stephan honors Steve Jobs, who gave Around Lake Michigan a laptop and the company behind a primary channel of my expression. Also my grandfather Steve Redling, who painted the concrete naked ladies in his backyard garden white... with red nipples and pubic hair.

You've been listening to the Daughter of Godcast, episode 032, Waves. That's a wrap on 2012, End of the Great Cycle in the Mayan Calendar. THo for us not the end of time, Along this strand of the golf ball / multi-verse the spooling continued. The years just keep coming.

4 more and change to get to the now in our story of the Daughter of God. When and where I am recording and roughly corresponding to your watching and listening, or maybe not. Because you might be hundreds of years ahead, listening to what the ancestors squeaked and squawked into their crude instrumentality, so primitive that only the sound and picture were captured, which is such a tiny fraction of the moment, the now. How quaint.