A podcast about movie making and the scifi featurette, Daughter of God, with Director Shri Fugi Spilt, (Dan Kelly). Two, or Too.

Hello and hi and welcome. You're listening to the Daughter of Godcast, yet another episode 026, Two. That's the title of this episode, Two, as in the number or maybe Too like you too. Not the band. Ok, try me too. That's not a band that I know of.

Here's a milestone. 26 weeks. When I started this podcast, I didn't realize I'd still be going a half a year later. What was I thinking? I wasn't thinking, honestly, and that's why I started.

I started because podcasting felt good, mostly. Yes there were rationalizations for podcasting, which eventually imploded, like growing my audience. Branding is another abstraction of similiar ilk. Piling symbol upon symbol, a veil of abstraction obscuring the now, the unspeakable, the shine. I started podcasting to have fun, to look back with enhanced eyes, to invent a thousand answers to one question - why movie? To share a song and see who kicks in with harmonies. Deliberately moring myself along the way.

100,000 words or more by now, I'd guess. Have I explained anything, have I taught you how to make pancakes or accomplish anything pragmatic? Or have I just been singing. Paraphrasing that old rascal Alan Watts, the best music is not about anything. We think of words as having a jist, getting us somewhere, if we listen to enough of the right words our brain will assume an optimal configuration, we'll get smart or wise. We'll figure it all out.

If you are having epiphanies listening to these podcasts, it's not because the words mean anything really, it's just that the word noises and rhythms remind you of who you are. You're using this gush of nonsense and anecdotes that I've been spouting for the last half year as your excuse to flip on your own power switches. You're pretending that I am somehow MORE entertaining, effervescent, insightful than the mote of dust caught in the light off to your left or the blade of grass poking up through the concrete outside your front door. 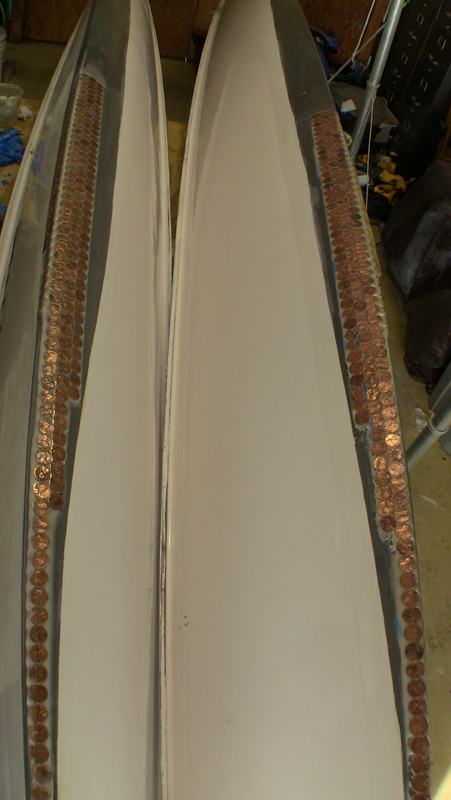 I'm just some dude in Michigan yaking into a microphone, YOU'RE the buddha, YOU'RE the savior, YOU'RE the freaking cosmos. Remember?

At the end of episode 025, 2009 I had left Hello World suspended from the ceiling of the Artist house, and returned to Prospect Heights, but my life in NYC had acquired a definite wobble. I was planning to launch the second expedition of ALM in May of 2010 - at the beginning of the summer this time instead of the end. That would give me 3 months to sail the 1000 miles around Lake Michigan. From January through April I did my usual New Yorkish things, tai chi and hot babes, but my heart was already on the Big Lake. 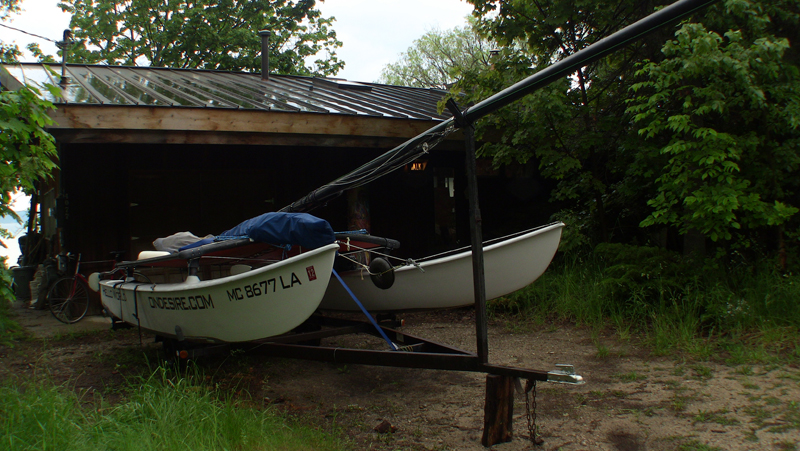 Prepared for launch in May 2010

I'm going to jump ahead, and tell you a few endings. The second expedition launched in June and Hello World and I headed south.  37 days and 300 miles on the water, west to Chicago and then just north. Hours and hours of interviews. Then in mid July, before we touched a single grain of Wisconsin sand, Hello World and I had a series of unfortunate accidents, the last one next to a decommissioned nuclear power plant that abruptly ended the second expedition. 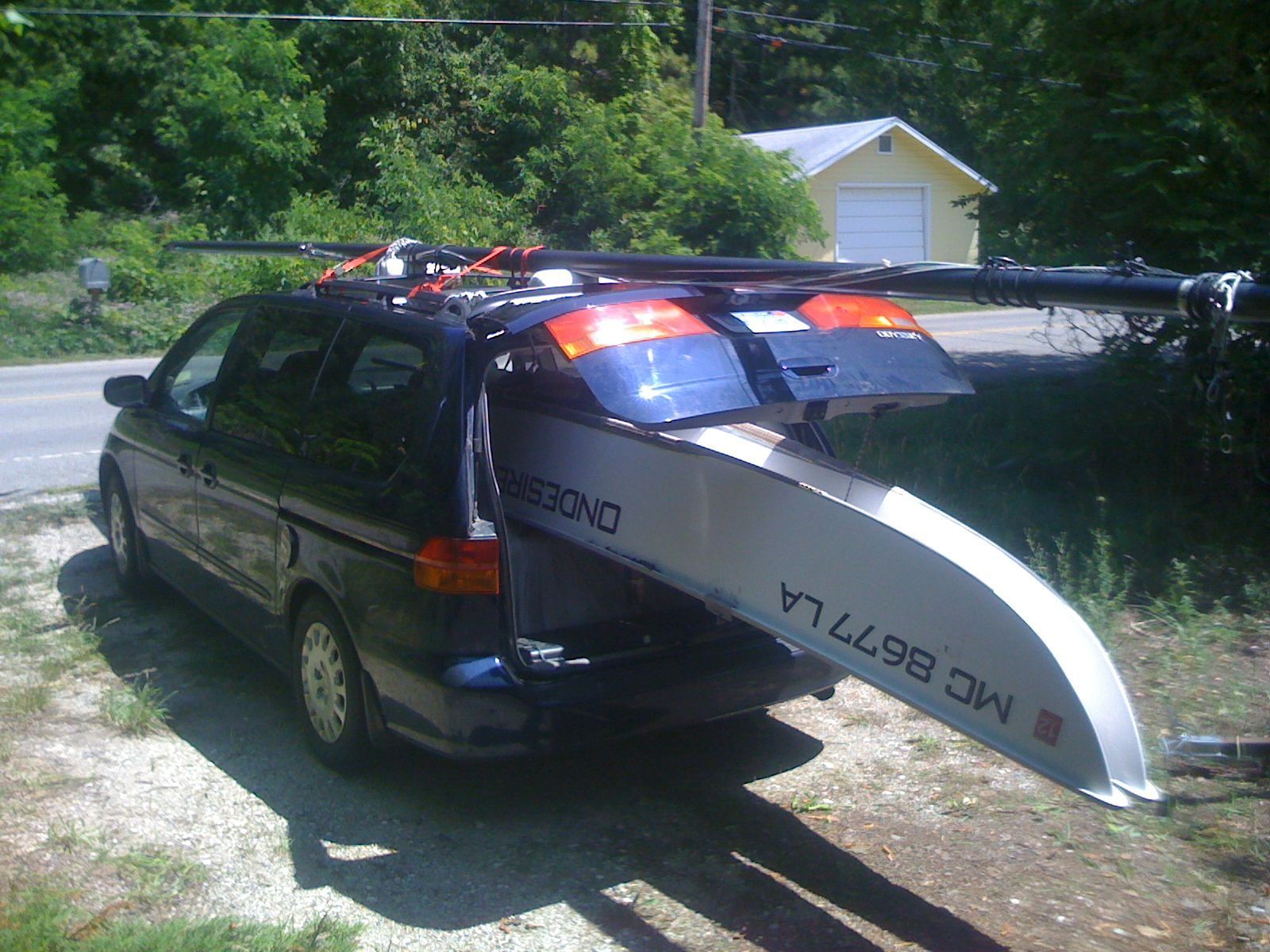 The abrupt ending gave me a summer on Crystal Lake. I had no desire to rush back to Brooklyn. My finances were depleted, the Artist house needed a new furnace and liked Beulah better than Brooklyn now.

I closed down my Prospect Heights presence and moved out of the apartment on August 1.

Now I had TWO unfinished projects. Or maybe two key ingredients in the recipe for the perfect pancakes. Perhaps Daughter of God and ALM weren't separate projects at all. Not sequential incompletions, but synergy.

I had told myself and others that Daughter of God was merely deferred. Faisal had offered to workshop the edit while I was sailing, the cast and crew were supposedly waiting... but in episode 022, I said I gave up. Building a fictional apocalypse while an actual apocalypse was nigh seemed silly. I was curious to see what Faisal came up with certainly, his generous offer enabled me to pretend Daughter of God was just gestating. Waiting for me to return and dedicate my full energy. I didn't really feel that. I wasn't imagining DOG done.

My sustainability search was halted, or at least the sailing aspect. Hello World would need major surgery before we could venture out again, and the repair might be more than I could manage. Maybe Around Lake Michigan needed to be retooled, the premise expanded. After 600 miles of sailing and interviews, perhaps this idea was poised to more also.

Two unfinished movies and an ending to exile in Brooklyn. 6 years of intense adventure and DIY film school. Now what?

In my six years absent from the Benzie County show, new characters had been written into the script. There were intriguing kids playing in my sandbox. The film scene in Traverse City was booming! At the end of 2010 I threw parties and hung out with my nephews, placing myself back on the regional radar screen.

I heard about a group of activists flying to Africa to build schools and promote fair trade. Having just sailed 600 miles seeking regional sustainability, I felt I was in a position to offer gentle critique. Mostly to two excellent friends, my younger rabbit brother, James Schaberg and his wife Jamaica who had been invited to go along as documentarians.

Nobody paid much attention to me. A few feathers ruffled. Who the fuck is Dan Kelly anyway?

Here he is sailing south in June of 2010, a little beaten up.  Out of Elberta and enroute to Arcadia, needing to make one more pit stop to finesse a few details. There's more than month of blog posts, interviews and more to be shared, but this is where Around Lake Michigan ends on the Daughter of Godcast, for now. We're moving on into 2011 in episode 027, re-established in Beulah, joining a thriving regional film community, in delicious rapport with lake and forest. Let's remember Dan Kelly right here, a summer of sailing and movie making ahead of him, no idea who he would meet, what he would discover or where he was going. Perfect. 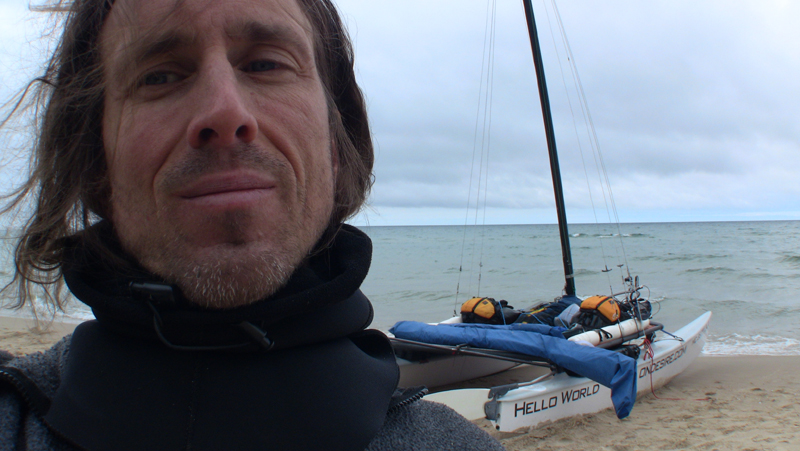 You've been sailing with the Daughter of Godcast, Episode 026, Two or Too. We've wrapped the two open water expeditions of Around Lake Michigan and ended 2010. We've left two multi-year cinema projects incomplete. There will certainly be more sailing and physical type adventures upcoming, motorcycles, iceboats, nudity, illegalities. Faux pas and behaviors frowned on by all the best people. Movies on screens but mostly in your mind. Next week again, shall we? You are invited.