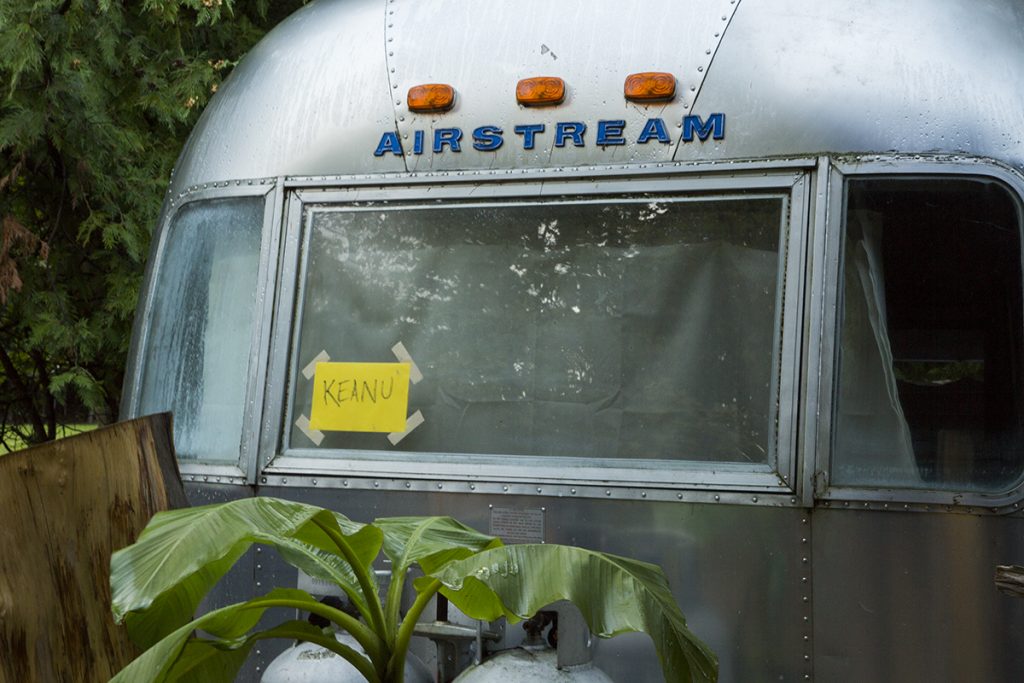 Daughter of Godcast, episode 004.1. This is a supplemental episode, diverging from the main narrative and flashing forward to the near present. I want to remind everyone that today, September 28, 2016 the story of the making of the Daughter of God is far from over, that while you listen to my dusty recollections of DV video and the Iraq war, the game is still very much afoot. Oh, yes friends things are a happening. I'm not kidding about the importance of a GENTLE release, short of getting run over by trolley cars, I am going to tell you the whole story, and by the time we're caught up, you'll be prepared for the present reality, which is boggling. For proof, I offer this little tidbit. This supplemental chunk. A taste from just LAST YEAR.

November 2015. I'm visiting NYC, on my way back to Michigan from running a Spartan Race in Philadelphia. Catching up with Master Ru and my Tai Chi family.

Also planning via text a reunion with Mark Dillon of 1st Ave and 5th Street fame. This was the crazy matchbox apartment we shared with two other 20 somethings back in 1984. That friendly old codger Reagan was President. A time of awakening. The East Village. I was 23 and cracked wide open. Liquid LSD in the refrigerator. Spooky, magic, momentous and profound happenings. Young gods playing, the universe was intent upon us.

I hadn't seen Mark since he and Lori got married in Oklahoma around 1991. Since then two almost grown kids for the Dillons. Mark had decisively escaped the family novelty business in 2014, and moved Lori and the kids from Norman, OK to Brooklyn, NY.

Mark and I were going to eat at the venerable Excellent Dumpling House on Lafayette in Chinatown, our traditional meetup place, still serving after 30 years. 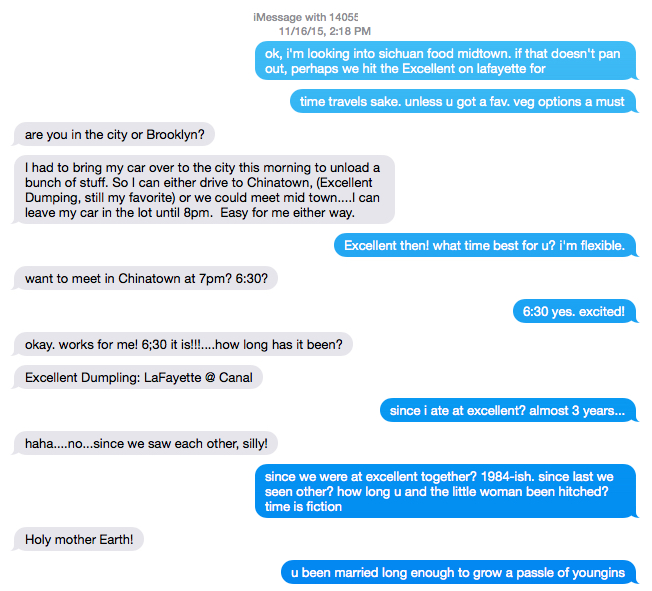 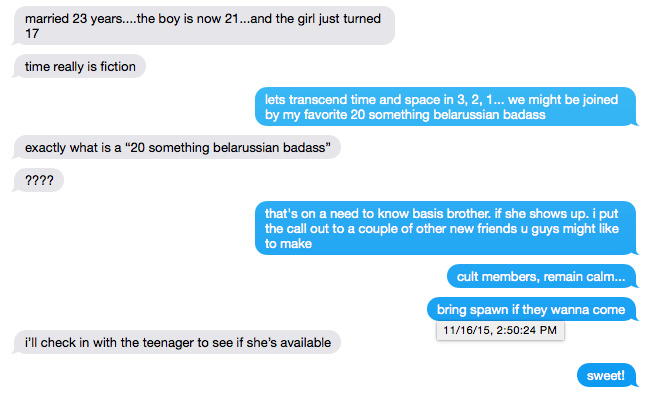 The wild wheels of the mystery machine were spinning, a sparkling experience awaited.

Mark showed up sans fam. We ate and talked. Cold sesame noodles, dumplings and sizzling garlic eggplant. Afterwards we went for a walk. I was ranting about Daughter of God, about feeling the power surging and asking whether he was planning on acting again or even directing after doing theater work in Norman.

Strangely, the twisting narrow streets of Bayard, White, Mott and Mulberry were overflowing with production gear - huge Arri lights on hydraulic lifts, the hubbub of busy crew, a whole squadron of editing bays on wheeled carts crammed into an alley. A big budget film was shooting. Production assistants detoured us away from a brightly lit street and then Mark said, "There's Keanu Reeves." He was standing on the corner we were stepping up onto. Mustering my most confident and collegial manner, I looked him in the eye and said "Hey." He met my gaze silently and we walked on by.

I was like "Whoa, that was weird." We both were kind of excited and blasted back in time to city street serendipity. The magic was hot and moving again.

Eventually we split, him back to his apartment and me back to my battered blue Honda Odyssey, parked discreetly by some construction on the lower east side.  A little later, Mark texted me an image - the title of the movie Keanu was shooting in Chinatown. 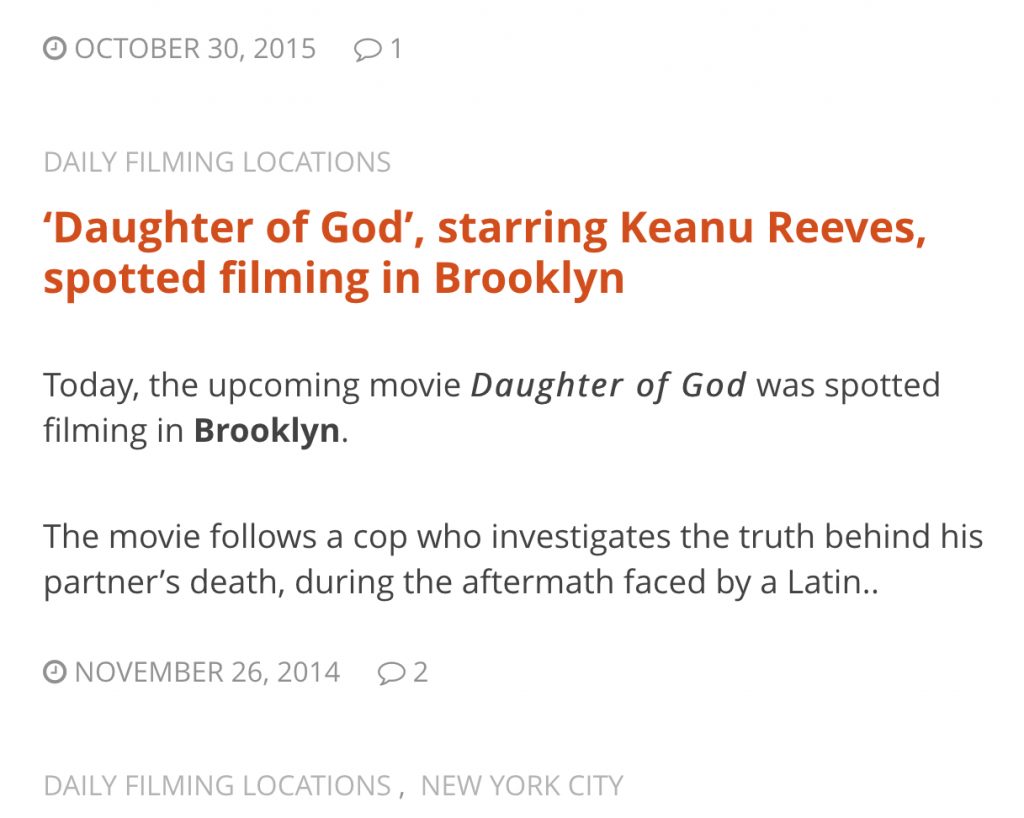 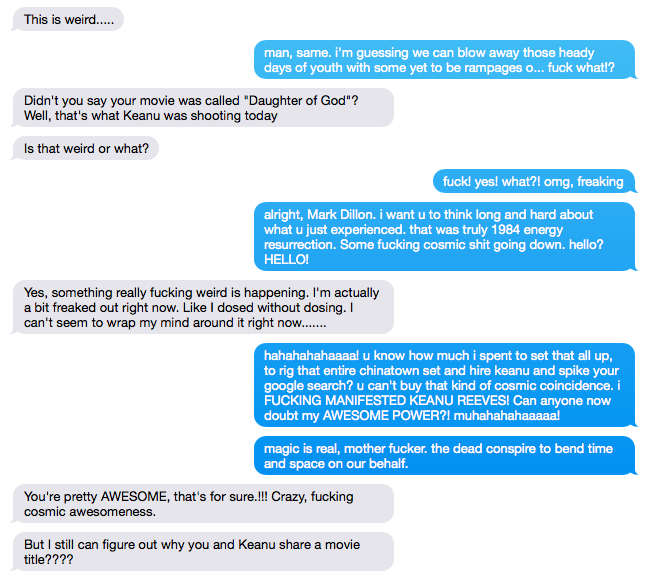 As of today, Keanu Reeves has not moved into the Airstream, but certainly he's got an open invitation, tho I'll be shutting the water off in October. Ever see those Facebook memes about how Keanu is kind of sad because his life had been hard, full of loss? Well, if this is true, maybe he should hang out with our tribe more. He's got friends in Manhattan and Michigan he didn't even know about, until now.

Keanu and Mira Sorvino’s Daughter of God was retitled Exposed and released in 2016. I gotta say, Keanu’s agent clearly wasn’t fully up to speed on the latest temporal transcendance technology. Keanu needed to bump into me in Chinatown in 2005, not 2015! Then he would have gotten the part of Gerry instead of Steve Zilliax. Steve could have played Uncle Joe, or vice versa. I could have found something for Keanu, honest.

Instead, Keanu gets totally sideswiped in the time space continuum and entangled making this other Daughter of God – way too late. Another chance to paradigm boggle Matrix-style but instead more gritty cop drama, plus Mira, yum. One might opine that one reason we are delaying release of our Daughter of God to give Keanu’s film a fighting chance.

That’s how we like to roll, doing favors for our future best friends. Like helping out Vigo Mortengenson and The Road. We scouted and shot at the awesome abandoned turnpike in Breezewood, PA in 2007. The next thing you know, The Road’s location people are all over the turnpike in 2008. Just like we planned. De nada.

We’re happy to help because we’re so brimming with infinite cosmic abundance, everything seeks to assist our bliss. We’re epic. Maybe that’s why Lionsgate retitled their Keanu project “Exposed” and decided to release in 2016 – to get out from under our long shadow. Either that or they heard about our sultry Polish entertainment lawyer. Beautiful but deadly. Cue Bond theme.

What is the import of this story? For some listeners, maybe most, it's just a weird coincidence, which is to say meaningless. How can there be any connection between people who've never met, projects that share no commonality besides a working title? Two friends meeting for the same dumplings they ate 30 years before and then firing off old patterns, to them everything seems suddenly packed with profound mystery.

"The only way of discovering the limits of the possible is to venture a little way past them into the impossible."

"Any sufficiently advanced technology is indistinguishable from magic."

When we think of technology we think of gadgets, iPhones or apps but obviously the most advanced technology on the planet is our bodies, the mechanisms of which we so imperfectly understand. Bodies are way easier to experience than understand, how deeply do most of us allow an experience of being alive? That I think, is the path to magic. The full experience of one dumpling could power a starship.

Mark Dillon as himself.
Dan Kelly as myself