Wow, Episode 003 of the Daughter of Godcast podcast. This must be a real thing now. Especially since you're still listening. I'm kind of amazed myself. I wonder how many episodes there are going to be? Maybe 33, to coincide with the known degrees of Masonry, but at an episode a week that would be more than half a year, unless I started releasing two or three episodes at a time.

Let's not fret about such trivia, let's talk about the making of the longest little movie ever, Daughter of God!

In Episode 002, I offered Carmen Althaus the part of Christina. She was super excited to breathe life into the role, her enthusiasm was off the charts. We were more than two people now, we were a project.

Offering Carmen the part of Christina was an act of ecstatic hubris. A magical, sublime and audacious mistake. This was the moment when my first movie went right off the rails of reason and into the electric azure blue sky.

Seemed like the path of least resistance. Carmen had theater and film experience, she was smart, funny and motivated. Christina would fit Carmen like sparkling, silver sequined skin tight zentai. Carmen would loan Christina her flesh. I could just hand over my main character and concentrate on pre-production.

Acting on this epiphany caused a hundred thousand easy realities to wink out and now a lightning streaked vortex yawned open, sucking me in!

Originally I conceived Daughter of God to be ultra easy to produce - three characters, minimal props, simple sets. I could do the whole thing in just two rooms. With clever camera coverage, my own narrow railroad apartment in Prospect Heights would have worked fine. The only tricky bit was finding an actress who could play Christina, but with the advent of Carmen, this was no longer a problem. We were under way.

Except... I wanted the project to be legal. I wanted to be able to sign contracts and have clear chain of title which means being able to license the movie to distributors after it's done. Carmen was a citizen of Switzerland, she couldn't work in the USA legally without a green card or H2B visa. I immediately applied for an H2B and was denied.

After Tai Chi class one morning, browsing in the South Street Seaport Strand bookstore, I picked up a used copy of Making Your Movie for Less Outside The US by Mark DeWayne, ($8.97). I could sign a contract with Carmen if I shot my project out of the country. Canada was only 6 hours drive north. I started to hammer out the details with the Entertainment Unit of the Canadian Foreign Worker Program. 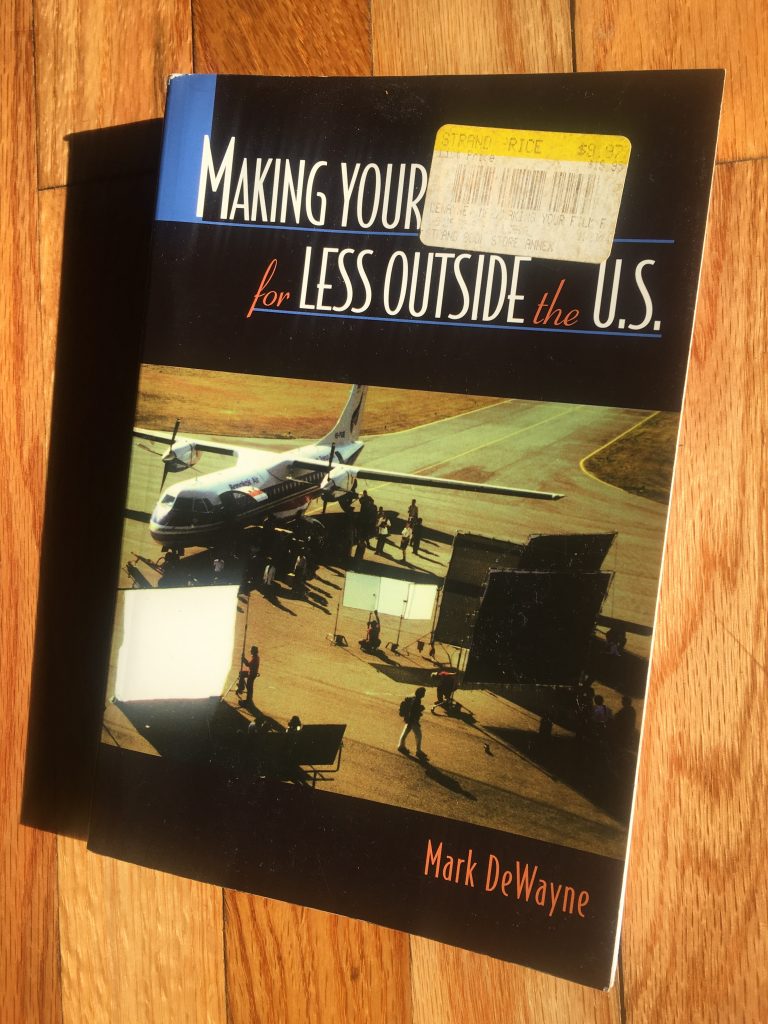 The ultra easy production was now slightly complicated, the vortex swirled and sparked.

Once I found Carmen, I never reconsidered. The idea that I could cast an American as Christina and shoot the project in my apartment felt like retreat. There was a single mindedness that seemed almost unbalanced, looking back. I can admit to having a mild crush on Carmen, perhaps abenteuerlust (lust for adventure) had taken over and/or the project had become self aware, like Skynet and I was now a mere puppet. Daughter of God was coming, and Carmen WAS Christina.

March 2006 and almost ready. We had a strategy to shoot legally with Carmen. The other two male parts were cast. A tiny crew had been recruited. The intensive identification and acquisition of the optimal equipment package was mostly complete. The disparate schedules of everyone involved overlapped in April. But we were still sans a Canadian location.  Time to reactivate my secret weapon, the Japanese/French connection.

I'd moved to New York from Michigan once before, in 1995 to be closer to the woman who would eventually become my wife and 9 months later my x-wife. Aside from setting me up for a glorious prat fall, my 90s in New York City yielded a fabulous boon, Maho Sone.

When we met in class at the Art Student's League, Maho spoke Japanese and French fluently, English not so much. We clicked anyway and she introduced me to her neighbors at that time, Claire and Fabrice and another rascal, Eiji, all of whom eventually became involved directly with Daughter of God. But Maho changed everything.

While I was getting married, divorced and arrested in Michigan, Maho's English improved, she found a nice Japanese guy, Shinji and they opened a chic chic restaurant, Bozu in Williamsburg.

I asked (more like begged) Maho to help with pre-production, first as a stylist and then with locations. Only a month left and we needed a small house or perhaps a couple of adjacent apartments in Canada, close-ish to the border. She agreed to do research from her place, and send me results via email. The ding of her third message on March 15, 2006 was the sound of the vortex gulping the project down.

Alexander Henry is the name of the ship.

is the site for the Museum inc the ship.

Paul-George is the name of the gentleman I spoke with. He is off on Friday, but there are other people that could take care of us as well.

In Kingston, Ontario, the 150 foot ice breaker Alexander Henry was being operated as a bed and breakfast.

Did this make sense? Why would the characters be living on a big boat? By even asking this question, I gave myself permission to re-engage in the joys of world building.

My 2oo5 Palm Court Inn writing marathon resulted in a collection of pre and post apocalyptic vignettes. Now, your cliche end of civilization scenario posits a failed energy infrastructure, so no lights, no pumps for gasoline or water, no sewage treatment. Cities burned or drowned, riots, hordes of roaming scavengers and worse. Depicting all that convincingly is a lot of work. To keep Daughter of God's production svelte, I had trimmed off most of the post apocalyptic context.

The script let the characters' interaction and dialogue imply their world, overt visual exposition would be clutter. They inhabit an idea of ending, replete with unsettling casual references to mayhem and gallows humor insinuating dire circumstance.

With the prospect of shooting on a big boat, context came flooding back.

The characters might be living on a big boat because big boats have independent infrastructure - power, plumbing and light. Big boats can pump fuel out of storage tanks in abandoned ports. Big boats can relocate to safer shores. A shadow of bygone days could persist on a big boat.

Big boats also have plenty of cabins for crew and passengers, so there would be myriad choices for the two rooms needed. 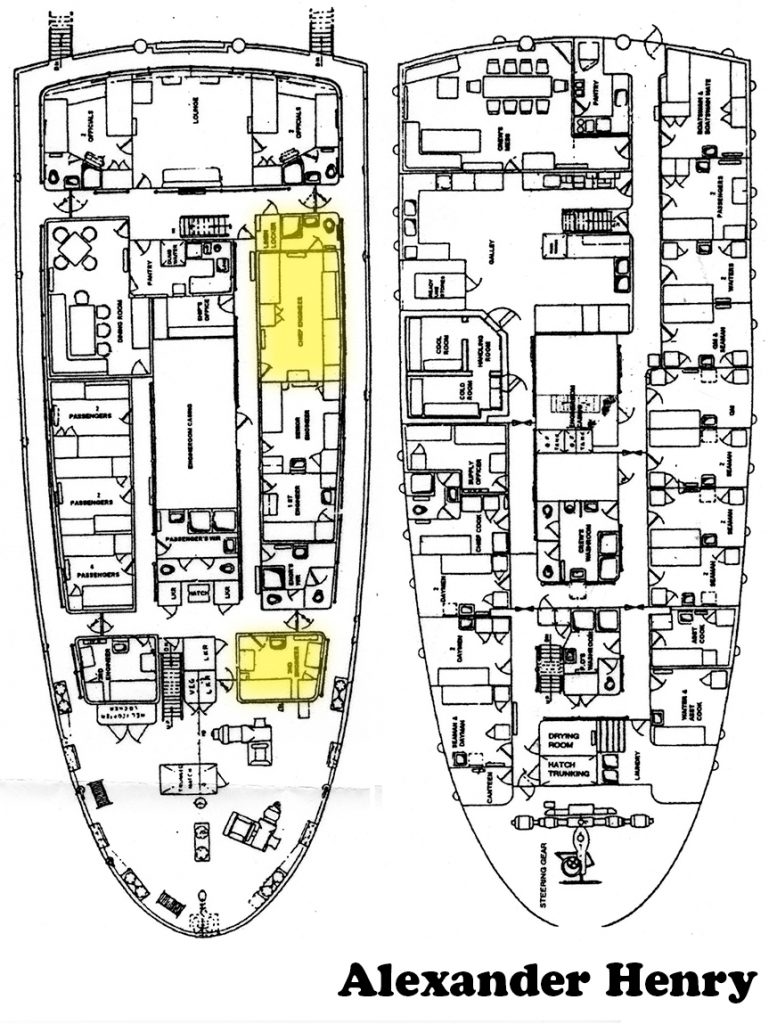 The Marine Museum of the Great Lakes at Kingston was the organization in charge of stewardship of the Alexander Henry. The Director, Ann Blake opined over the phone that April was doable - right between the winter thaw and the tourist season. The final step before signing contracts was to scout the location and confirm. On March 22, 2006, I jumped in the Odyssey and headed north.

At the border crossing in Landsdowne, I was refused entry into Canada. My FBI record tagged me as a sex offender.