So hello and welcome! Episode 002 of the Daughter of Godcast podcast. I'm Dan Kelly, writer director talking about my dark yet uplifting post apocalyptic romantic comedy featurette, Daughter of God, 11 years in the making and as of September 6, 2016 in the process of gentle release.

Lots of people have helped out with the movie whether or not they realized they were helping. Aside from poking fun at celebrities, the mention of a first and last name recognizes a person who made an important contribution to the DOG project, and my life. Full appreciation of them may require more than the current episode.

Episode 001 introduced Michael Aaron and his student film, Blind Date. I don't know where Michael is now or what he's up to, been a long time since we've spoken. But if it weren't for Michael, DOG might never have happened and I might still be wasting my life doing things I almost like.

I met Michael at the NYC Final Cut Pro User's group. He had just finished up the Director's program at the New York Film Academy and was having trouble posting his first film. He was looking for an editor.

I can vividly remember watching his rough cut. A disaster! There were so many mistakes, so many problems... and yet I was getting more and more excited. Could I fix this? Was it possible? He certainly didn't have the budget for major remediation. There was a bit of genius, could it be teased out? Could -I- make his movie work?

I called him and told him I'd fix it for a flat $400. He'd have to wait a month or two. I learned so much, and Blind Date was accepted into a slew of festivals. One of which, I attended.

So where ever you are Michael, thanks.

I'd been covering the stage from the high balcony for days. She was one of the leads in the avante garde musical I was hired to point my camera at, a tall lanky blonde with a quirky exuberance, seen mostly through an L-Series Fluorite zoom lens, providing btw, unsurpassed image quality unobtainable with conventional optical glass. Now she was near enough to thumb wrestle, sipping something, bonding with me in a bar not far from the theater.  After 15 years living mostly in Michigan, how did I come to be lounging next to this gorgeous / goofy triple threat in Manhattan, way off off Broadway?

In October of 2003, I cleared out of the family's lake cottage I'd been squatting off and on since 1988 and left Michigan, a pariah. A few months earlier, during a visit to my parents' house just down the road, my father took me aside and said, "You're making life miserable for your mother and I."

His brother Jack, usually a joke cracking Irish leprechaun, had been overtly hostile for the last half year.

Jack was especially bothered by the signs I'd painted and posted across the street from the cottage, for instance "Happy War".  Also, me being one of the Traverse Eight. 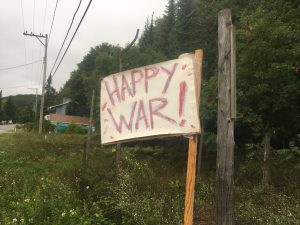 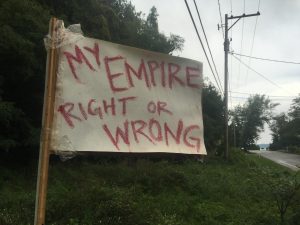 In March 2003, thirty or so activists blocked an Army Reserve convoy departing from Traverse City to support Shock and Awe in Iraq. Eight were arrested, including me. The Traverse Eight. Our action was carefully planned, supported by scads of citizens and backed by a crack team of pro bono lawyers. The objective was to offer an alternative narrative about the impending war with a robustly publicized show trial.

Mother Jones, Lie by Lie: A Timeline of How We Got Into Iraq

The results? Zealous felony charges by the prosecutor, healthy confusion about the concept of patriotism, ongoing TV coverage and editorials in the regional newspapers, both condemning and sympathetic. I'm guessing my Republican dad caught hell from his Rotarian pals in nearby Frankfort, Michigan and his fellow conservative Catholics at the local church, St Anns.  I can only imagine.

Some Christians assert that the unborn have a right to life, unless I guess, they were in the bellies of moms in Baghdad in the Spring of 2003. Well, shit. The war happened anyway.

Eventually, the prosecutor caved and the Traverse Eight agreed to pay a small fine for the equivalent of a parking ticket.

However, my family didn't see it as a win. So away, away. I blew out of Michigan with the autumn leaves, my 3 cats in a Toyota Tundra pickup pulling a trailer full of watercolors, digital originals and prints. That winter I trekked between juried art shows in the Sunshine state during the worst art show season ever recorded in human history. Did I mention I paint? 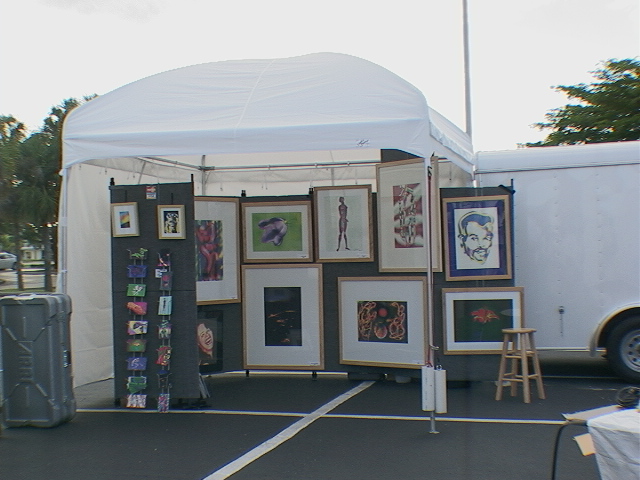 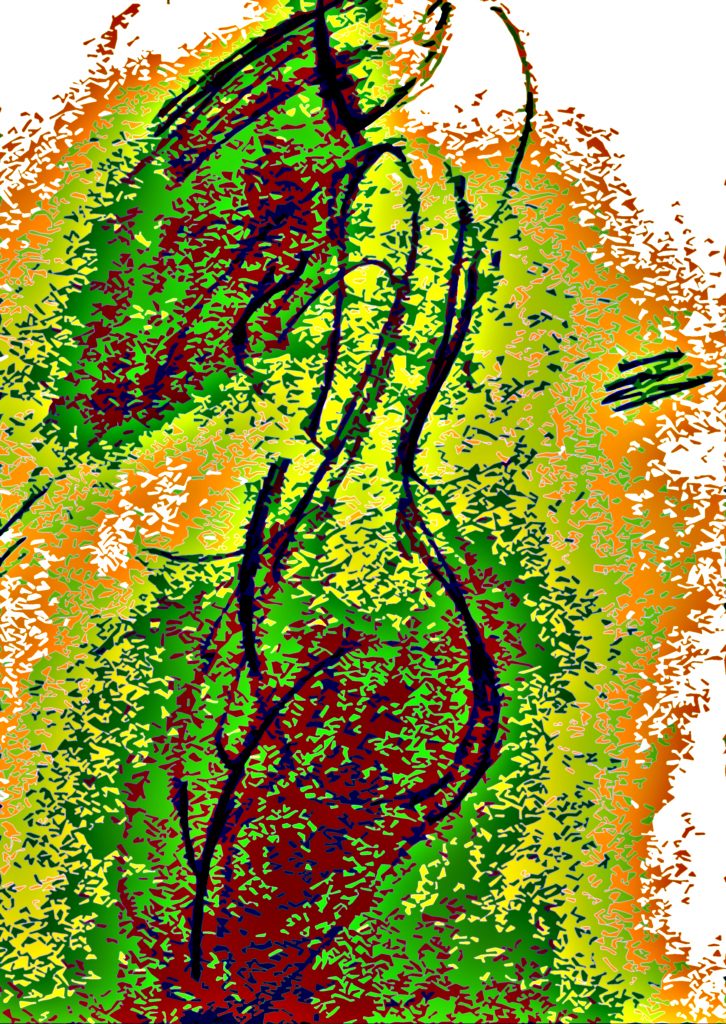 Sketching on my laptop in a strip club in Georgia. The itinerant artist is opportunistic.

Utterly discouraged with peddling wall art and having lost my cat Peanut to alligators in Bonita Springs, Florida, I decided to take a break and spend Christmas 2003 in the Big Apple, NYC.

Meanwhile, in Brooklyn... I checked in with my sparkling comrade Claire Hallereau. In January 2003, before I got arrested for laying under army trucks, she and I had marched for peace in Washington, DC with approximately 500,000 others. Now Claire and her husband Fabrice Covelli had split up, and Fabrice had moved in with Marion Ramirez, a dancer in his contact improv group. At that time, I was better friends with Claire than Fabrice but I didn't want to seem to be choosing sides. I visited Fabrice and Marion in their new apartment in Prospect Heights.

I lamented my art show debacle at length to them and then said, "I'd move to NYC if I could find an awesome space." I'd whispered this same bargain to the universe on the drive up from Florida, a wild throw of the dice. The odds were fairly improbable. Finding livable space in NYC has always been unlikely, never mind finding AWESOME space. 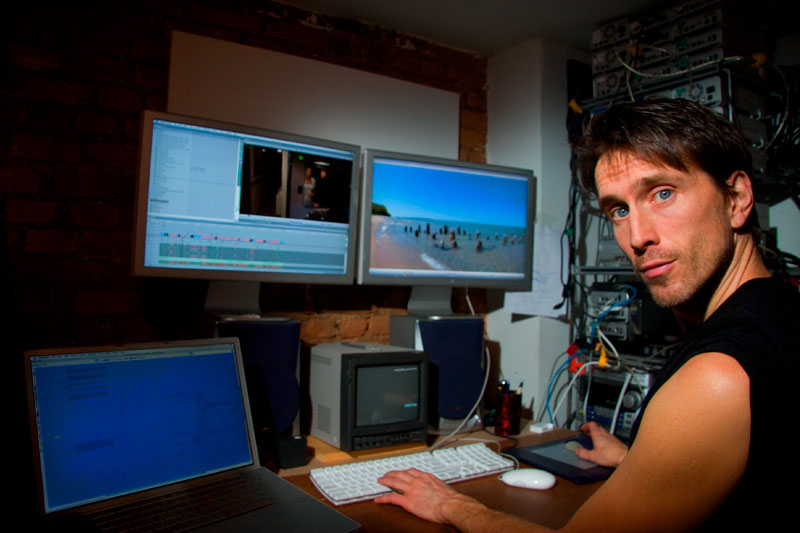 At the editing rig in my digs on St Marks Ave in Prospect Heights, Brooklyn

I've always had an affinity for dance and Marion was hooked into a vast network of performers. My main gig the first two years in NYC was offering dirt cheap freelance video documentation to artists, dancers and actors for their reels and web sites.

Choreographer Laurence Schroeder became a great friend and she booked me to do a multi-camera production for her theater collaboration Fata Morgana, right after my return from Palm Springs Short Fest.

Were now in late September 2005, I'm back from Palm Springs Shortsfest, I've realized that I want to make my own movies, I've written my first script Daughter of God and decided the lead character Christina would be near impossible to cast.

Daughter of God unfolds in a mostly post apocalyptic world. The refugee Christina is in her early 20s. She survived multiple civilization crashing catastrophes by mapping the childhood fantasies she improvised with her eccentric uncle onto her adult experience. She deflects trauma by interpreting events as extensions of the wild adventures they imagined together when she was a kid. The influence of this odd internal world results in eerily auspicious choices in a bleak and sometimes horrific reality.

Remember me sitting in the bar with the quirky blonde? That was Carmen Althaus, one Fata Morgana's principals, an actor who could also sing and dance, or in musical theater parlance, a triple threat. Carmen was in her 30s, but she presented as a woman 10 years younger, with a sort of delightfully feisty incoherence. She was all sharp nordic angles and gangly grace wrapped tightly around a slow swirl of joie de vive and smouldering creative angst. A multi-lingual swiss german, Carmen had a delicious euro accent and a ready if slightly maniacal laugh.

I fell into a sort of trance, watching and listening to her. What was it about this woman? She was sparkly, funny, odd... sure. Something else, something important. Suddenly, in the middle of that dim trendy bar, the fierce and almost blinding blue of wide open sky.

Carmen WAS Christina. Carmen could just be mostly herself and pull off Christina no problem. Was she interested in the part? Yes. Casting conundrum solved.

So much for those other scripts. Daughter of God was in the house.